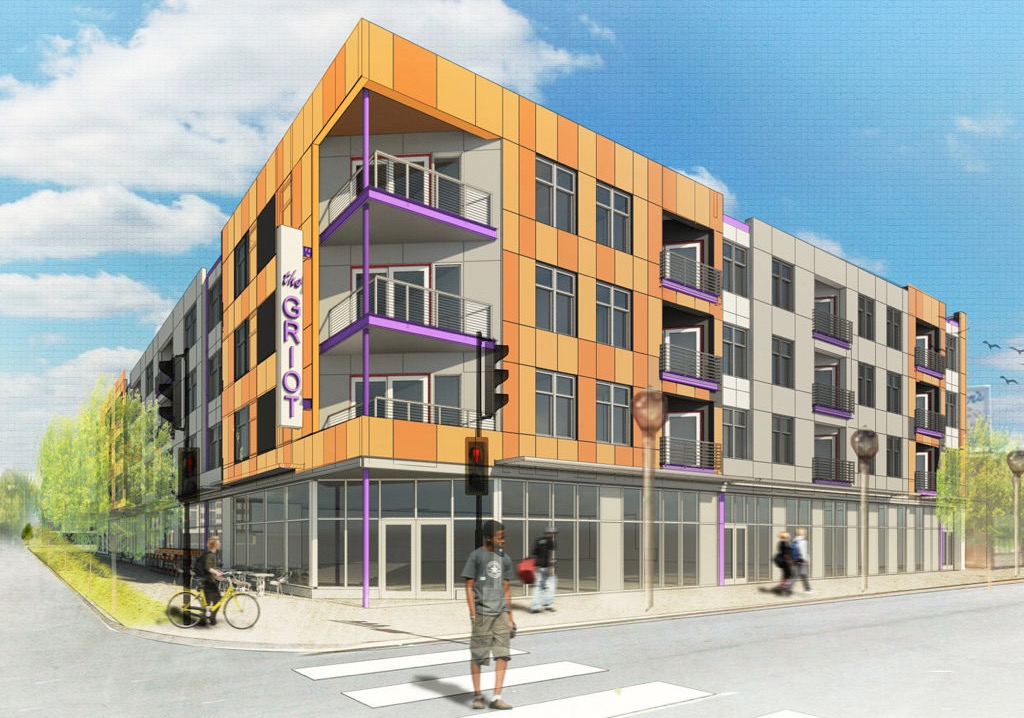 An artist’s rendering of the proposed multi-use building that may house America’s Black Holocaust Museum on the ground floor. (Photo courtesy of Maures Development Group)

Supporters of America’s Black Holocaust Museum, and people who remember the museum fondly from its days at 2233 N. Fourth St., are celebrating the news that the museum has been offered space in a new building to be constructed at the corner of North Avenue and Fourth Street.

Alderwoman Milele Coggs, who represents the Sixth District where the new building is to be located, announced recently that Maures Development Group will receive federal tax credits from the Wisconsin Housing and Economic Development Authority (WHEDA) to support the project. The money will jumpstart the four-story, 41-unit building in which the museum is expected to be the commercial tenant.

The museum’s original building closed in 2008 due to financial difficulties. Since then the museum has expanded its website into an online virtual museum.

Restoring the museum to a physical location will dramatically increase the services it can offer to the community, said Reggie Jackson, chair of the Dr. James Cameron Legacy Foundation, which governs the museum. 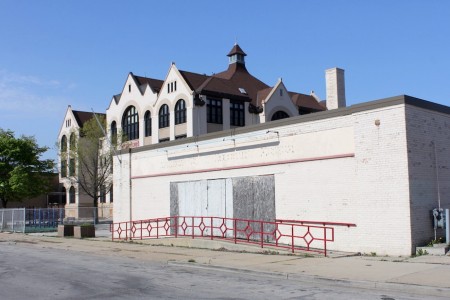 Milwaukee’s Black Holocaust Museum (foreground) may reopen as a tenant in a new building to be constructed on and around its current site. (Mark Doremus photo)

“It’s a lot more impactful for guests to see exhibits in person then to see them on the website,” he added.

Jackson’s enthusiasm for the new building is tempered with caution. “We’re excited about the opportunity, we’re excited about the possibility, but we are well aware that this is a great challenge and it’s going to take a great deal of effort on our part to make this come to fruition,” he said. “So we are trying to not to get too excited, not to put the cart before the horse. … But we feel very, very confident that we are in a position to make this happen.”

Jackson said the museum board will negotiate with the Maures Development Group about the amount of space to be allocated to the museum and the cost for occupying the space. In addition there are moving costs to reestablish the museum with artifacts and exhibits that are now in storage, and operational costs to be considered. The museum board is working with partners and supporters to develop a fundraising plan to support the bricks and mortar museum, Jackson said.

Re-establishing the museum would be a boost for the Bronzeville Cultural and Entertainment District, a redevelopment project designed to bring back some of the vitality of the old Bronzeville commercial district on Walnut Street east of what was then known as Third Street. The commercial strip, and its mostly black-owned businesses, were torn down by the city during two 1960s-era urban renewal projects.

The museum would be a centerpiece and the key attraction in the redevelopment zone and would draw visitors to the area. It hosted about 25,000 visitors a year, and 85,000 at its peak in 1999, according to a study commissioned by the city of Milwaukee.

If the museum is reopened, it would make the area more attractive to other business ventures, including restaurants, taverns, art galleries and music venues, all of which are needed to make the Bronzeville Cultural and Entertainment District a success.

The museum announcement came just weeks after Pete’s Fruit Market, a South Side business with a loyal clientele, announced it would expand to a second location on the corner of North Avenue and Dr. Martin Luther King Jr. Drive, where a Walgreens drug store was located.

The possibility that the museum might reopen was welcome news to Hibbie Hayslett, a retired Air Force officer who used to work there as a volunteer griot. Griots are hosts who are trained to guide visitors through the museum. The word evokes the West African tradition of a storyteller who serves as a local historian.

Hayslett and his wife Jerianne first visited the museum in 2002. For Hayslett, who grew up in Virginia with, in his words, a “white cultural bias,” that first visit was a revelation.

“We were just enthralled by the purpose and the meaning that was behind the museum and their effort to teach and to create understanding of racial history,” Hayslett recalled. “Their lack of anger and their willingness to build bridges was phenomenal for me.” Hayslett said he looks forward to volunteering again at the museum if it reopens.

The city announced its plan for the Bronzeville Cultural and Entertainment District back in 2005. With the events of the past few weeks, it appears the project is gaining momentum.

“I think (this news) is long overdue and I’m glad it’s finally manifesting and it is right on time with all of the momentum that’s taking place in the Bronzeville district, said Christopher McIntyre, an artist and member of the city’s Bronzeville Advisory Committee. “This will be a time that is remembered in history as one when Milwaukee gets organized and mobilized after a vision.” 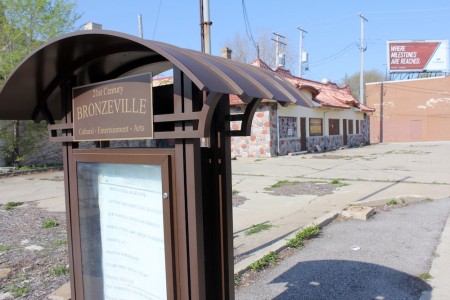 The City of Milwaukee has been working to develop the Bronzeville Cultural and Entertainment District since 2005.

“The wonderful thing is that it fits the framework of arts and culture,” McIntyre added. “If it doesn’t go with the overall essence of what Bronzeville will be like, then it won’t fly.”

Neighborhood commitment to the idea of a Cultural and Entertainment District was demonstrated by strong opposition to a plan to put a Dollar Tree discount store on the corner of North Avenue and King Drive, where Pete’s Fruit Market is now expected to open by the end of the year. The Dollar Tree was deemed inappropriate for that location.

“I’m thankful for people like Deshea Agee (who worked on the Bronzeville project for the Department of City Development) and Alderwoman Milele Coggs, who were safeguarding the future and the perception of what Bronzeville is going to mean,” McIntyre said. “This isn’t a microwavable solution. These things up and slow cooked for a long time and they are just now about to come out and be displayed for people.”

McIntyre added that the WHEDA funding will expedite initiatives that have been put on the back burner.

The news that the museum might reopen was also a morale booster for people who have long anticipated the re-emergence of a cultural and entertainment district on Milwaukee’s north side.

“Prior to the announcement, many people had developed a sense of apathy and cynicism … around whether or not Bronzeville as a vibrant cultural and entertain district will ever be something real,” said Jayme Montgomery Baker, a member of the Bronzeville Advisory Committee. “I think the announcement of the development at Fourth Street and North Avenue, coupled with the earlier announcement that Pete’s Fruit Market will move into the area, will begin to help to shift thoughts and sentiments in the community related to Bronzeville.”

Nearby development projects, especially the new Milwaukee Bucks arena, may have a positive spillover effect on Bronzeville, Montgomery Baker suggested.

According to minutes from a committee meeting on March 10, McIntyre and Montgomery Baker of the Bronzeville Advisory Committee, along with Ralph Hollmon of the Milwaukee Urban League, have met with representatives of the Bucks to urge them to consider how the new arena could have a positive economic impact on the Bronzeville neighborhood. There has also has been public speculation that the Milwaukee streetcar might be extended from the Bucks arena up North King Drive to Bronzeville.

“Having this taking place now is hopefully a perfect storm to really leverage the goal, which is the creation and development of an entire Bronzeville Cultural and Entertainment District,” Montgomery Baker said.