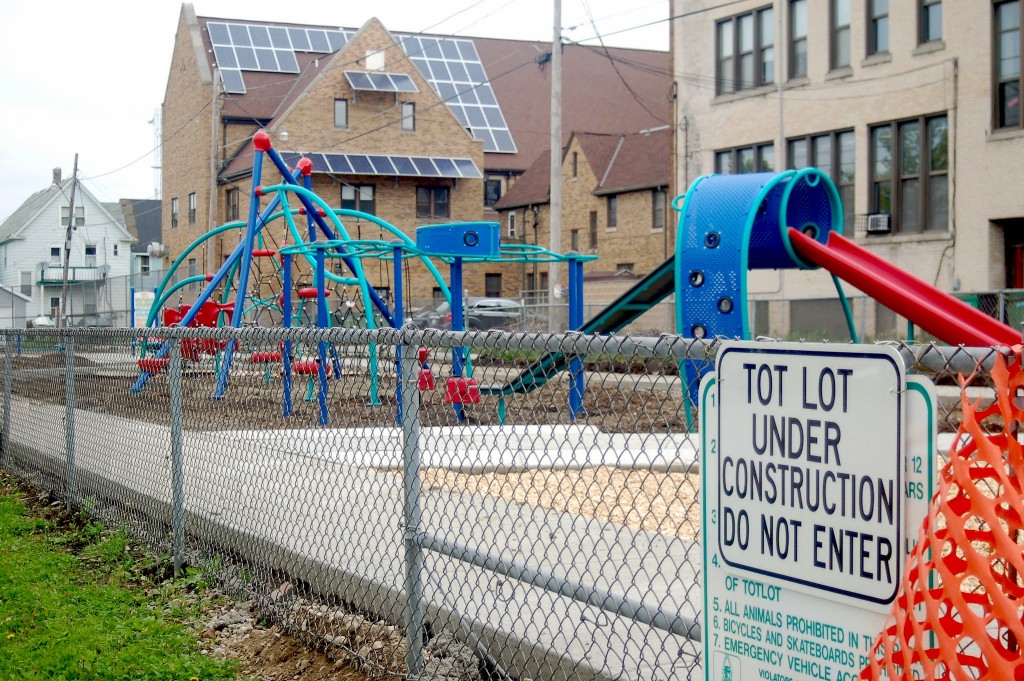 The reconstructed pocket park at 17th and Vine will open in June. (Photo by Edgar Mendez)

Construction on two parks, one located at 17th and Vine and the Marcus DeBack Park at 55th & Wright will be complete soon, as momentum continues to build for MKE Plays, a city initiative to turn a dozen dilapidated playgrounds into neighborhood centerpieces.

The park at 17th and Vine, slated to open in June, will include rope climbing structures, basketball courts, a walking track and adult fitness equipment, according to Joe Kaltenberg, program coordinator for MKE Plays. Kaltenberg said neighborhood residents wanted to create an intergenerational space where parents, grandparents and children could be active together.

The Marcus DeBack playground, renamed after an 8-year-old boy killed by an errant bullet there in 1995, will open in mid-July and feature a zip line, basketball courts with a permeable surface, a large rope climbing structure and other amenities.

“There are some extremely cool designs at these parks that the residents are really excited about,” Kaltenberg said.

Another park that’s nearing completion is Snail’s Crossing, located on the 3000 block of N. Bremen Street in Riverwest. Residents have been meeting since November to discuss the park, which should be ready to open by late summer, said Kaltenberg. 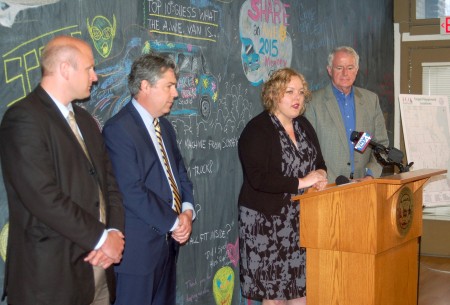 Alderman Michael J. Murphy is continuing to spearhead MKE Plays despite being replaced as Common Council president. Sarah Zarate, who helped develop the program while serving as Murphy’s staff assistant, departed after her office was eliminated due to the change in leadership.

Murphy was joined by Mayor Tom Barrett, Alderman Nik Kovac and Beth Haskovec, executive director of Artists Working in Education (A.W.E.), recently to announce that the program had received a prestigious $50,000 “Our Town” grant from the National Endowment for the Arts.

The grant, which will be matched by MKE Plays, will fund a joint effort between A.W.E. and the city to incorporate arts programming, including the creation of public art projects, in the remaining parks.

“The NEA now recognizes what’s going on here in Milwaukee is something very special,” Murphy said.

According to Haskovec, most of the funds will go toward stipends for local artists who will work with area youth to create art, consistent with the MKE Plays model of engaging the community in the design process.

“That process actively says to youth, ‘we need you, your ideas, talents, imagination, and voice to create spaces that reflect the assets and values of your unique neighborhood,’” Haskovec said.

The initiative is a departure from the typical top-down approach to playground repair in which the Department of Public Works (DPW) surveys equipment to determine what needs to be replaced.

MKE Plays has raised more than $1.9 million through a mix of public and private funding, including grants from the Zilber Family Foundation, Greater Milwaukee Foundation and the Fund for Lake Michigan.

The total surpasses the original fundraising goal by more than 20 percent, said Murphy, who added that his vision for MKE Plays was inspired by childhood memories of spending countless hours in what is now the Marcus DeBack playground.

“We envision a city with play areas whose condition is not determined by the ZIP code or district they are in, but rather are equally equipped to inspire a child’s imagination, regardless of where they are located in the city of Milwaukee,” Murphy said.

The 12 playgrounds to be rebuilt through the initiative were considered the most in need of repairs by the DPW. Most of the playgrounds are pocket parks, on a single lot. Work on the remaining parks is scheduled to be completed by October 2018, although there has been talk of extending the program to more parks in the future, Kaltenberg said.

Editor’s note: This article has been updated to correct the address for Marcus DeBack Park.