You are here: Home / News / Arts and Recreation / South Side youth transform blighted building with inspirational artwork
Share this... 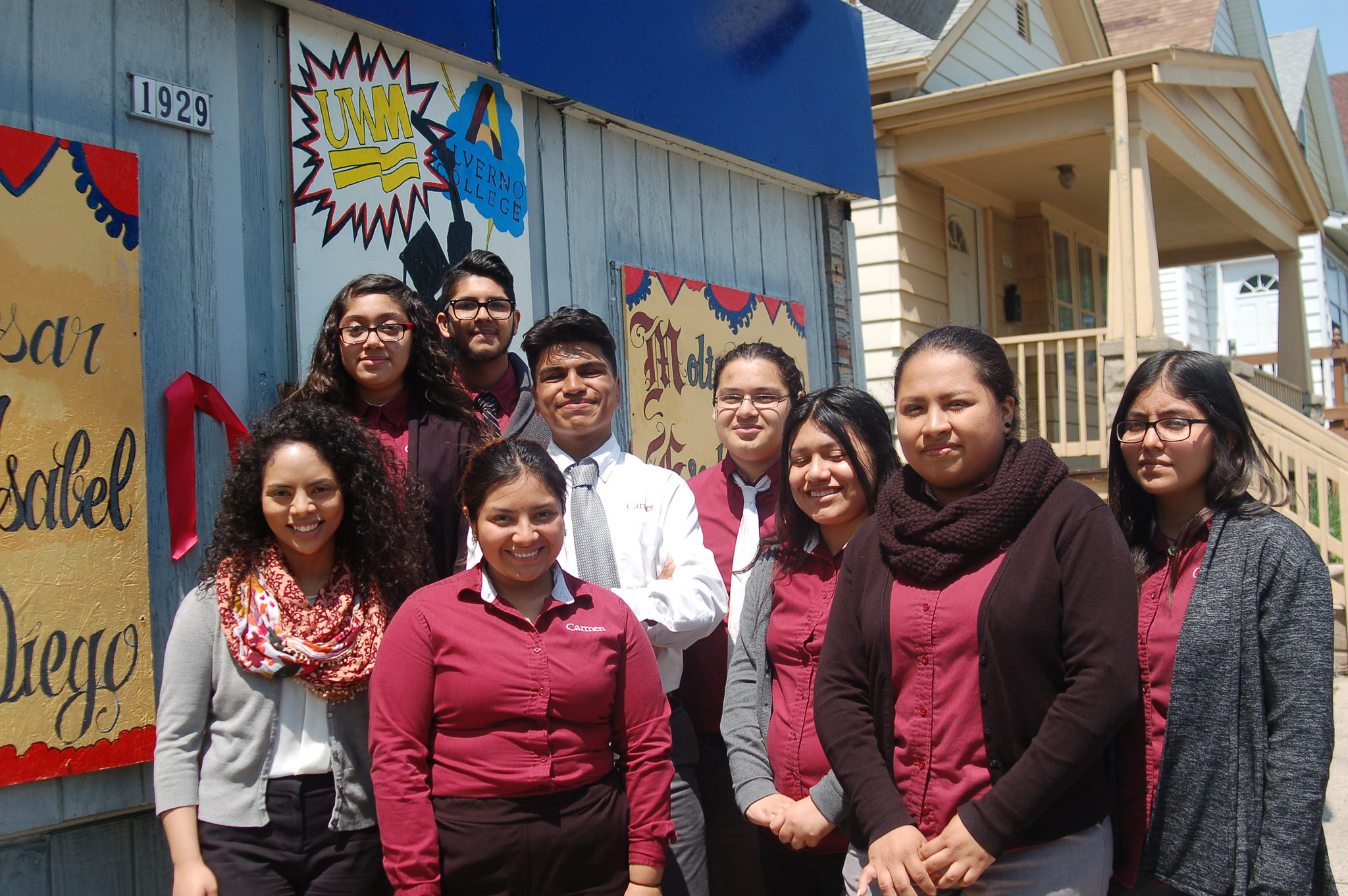 Members of the Carmen High School of Science and Technology’s Safe and Sound Youth Council worked for two months to complete the mural project. (Photo by Edgar Mendez)

Fifteen-year-old Daniela Dominguez, a sophomore at Carmen High School of Science and Technology’s South Campus, set a goal this year to help her community.

“There is so much going on like rapes, assaults and other crimes and I just wanted to do something to help,” Dominguez said.

So she joined the Safe and Sound Youth Council at her school, located at 1712 S. 32nd St..

The members first set their sights on a foreclosed nuisance property at 1931 S. 6th St., which had become a magnet for crime. They chose to utilize art to transform the long-neglected duplex into a neighborhood symbol of hope.

“We took something that looked really bad and attracted drug dealing and crime, and turned it into a positive message for the community,” Dominguez said.

The building, which still features a sign advertising house and apartment rentals, is also now adorned with paintings created by the teens under the guidance of tattoo artists from Aztec Ink.

The artwork, painted on wood boards and placed over broken windows, features the names of prominent Latinos, including civil rights hero Cesar Chavez, painter Diego Rivera and writer Isabel Allende. Also on the mural is the message,“Busca a una de estas personas en ti,” which translates to “Look for one of these people in you.” In between the names is a silhouetted figure donning a cap and gown flanked by the logos of Marquette University, UW-Milwaukee, MATC and Alverno College.

“We wanted to honor our heroes as well as help other teens to realize that they should aspire to be anything they dream to be,” said youth council member Jose Favela.

Creating the mural was a joint project among the Safe and Sound Youth Council at Carmen, the Milwaukee Police Department and the City of Milwaukee’s Department of Neighborhood Services (DNS), which identified the blighted property to be enhanced. It took two months to complete the project, based on the theme, “Helping yourself involves helping others,” said Favela.

But a different approach to deterring crimes such as graffiti and vandalism at blighted properties is beautification, according to Stephanie Samarripa, DNS anti-graffiti coordinator.

“Utilizing alternative art to beautify the building, the youth turned the property into a beautiful bright building that the neighborhood can be proud of,” Samarripa said. 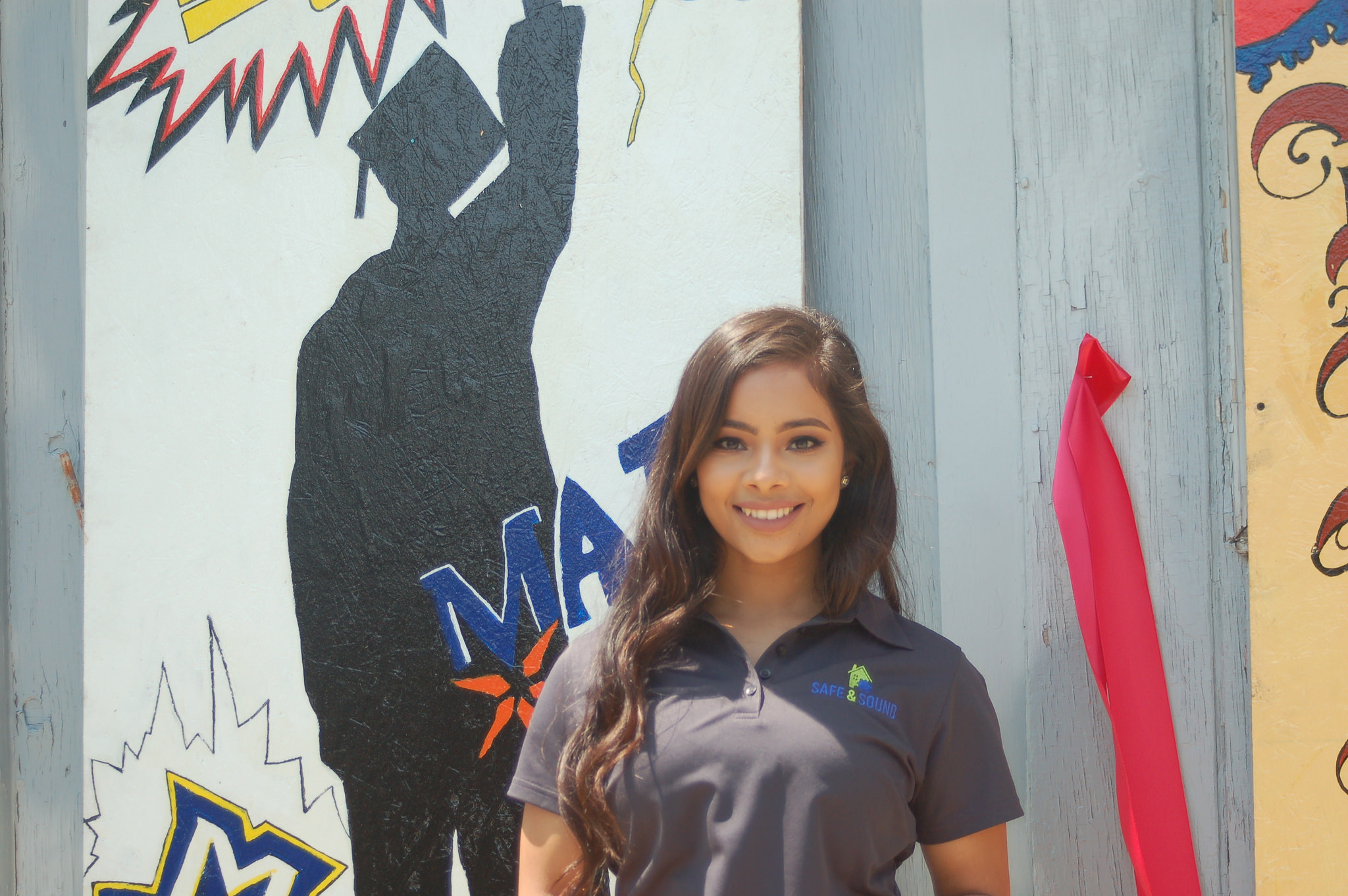 Safe and Sound’s mission is to unite residents, law enforcement and other community resources to create safer neighborhoods, according to Daniela Orozco, the nonprofit’s youth organizer for District 2. The youth-led mural project serves that purpose in multiple ways, she added.

“It allows teens to come up with a creative way to benefit their community and also keeps them off the streets and involved in a positive activity,” Orozco said.

Orozco, a graduate of Carmen, approached administrators there months ago about the prospect of creating a youth council at the school, and will be organizing a youth council at Longfellow School in September. She hopes more youth will see the benefits of conducting community service projects.

“By being involved in these types of projects the young people are sending a message to the neighborhood that they want to live in a safe and vibrant community,” Orozco said.