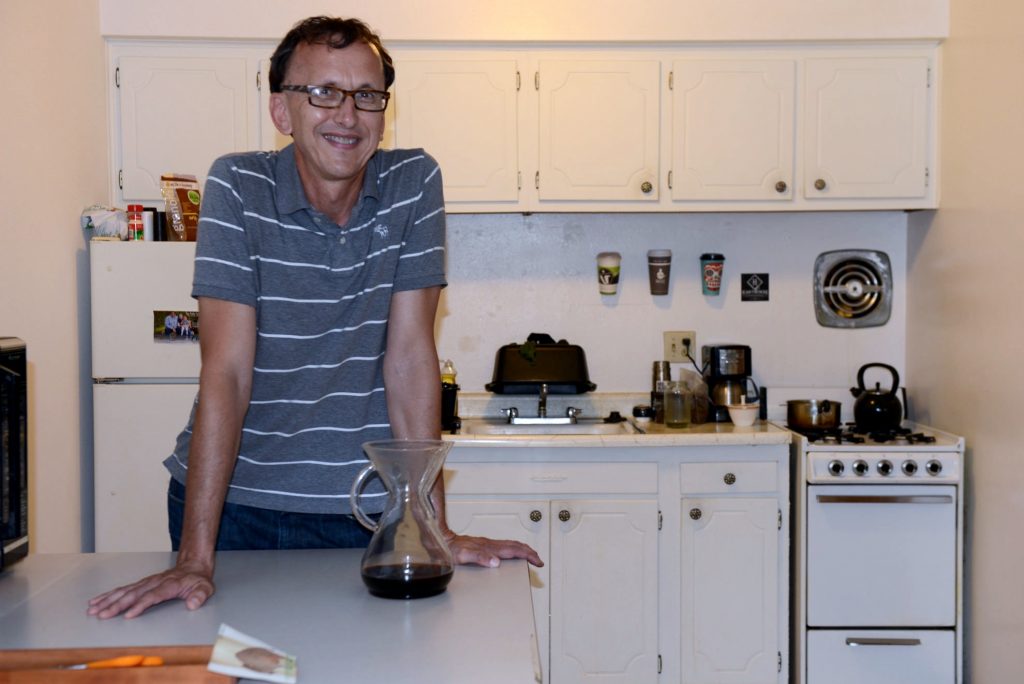 Robert Itzin, who was once chronically homeless, stands in the kitchen of his apartment, provided by Housing First. (Photo by Sue Vliet)

For years, Robert Itzin bounced from shelter to shelter as his addiction to drugs took hold and his life spun out of control.

But his life took an unexpected turn for the better recently when a couple of social service workers at a church soup kitchen told him of a local program to deal with homelessness.

To Itzin’s surprise, however, the initiative had nothing to do with curing his drug addiction or, for that matter, other typical interventions such as job training or spiritual guidance.

Instead, the program simply gave the chronically homeless man what he was desperately missing: a place to live.

“This was after a few years of a living hell,” said Itzin, 53. “Within two months of starting the (application) process, I had my own place on the East Side. Housing is a human right and when you solve the housing problem first, other things can then follow.”

Itzin is one of 145 people who were once chronically homeless and now have a place to live, due to Housing First, a program launched in July 2015 by Milwaukee County. The program has been deemed a success thus far by county officials, who say it has decreased chronic homelessness in the metro area by 70 percent.

“We are well ahead of where we expected to be at this point,” said James Mathy, the housing administrator for Milwaukee County.

The last point-in-time count, a tally of local homelessness held each January, found the county had 58 chronically homeless individuals in 2016, down from 195 in 2014, the year before the program started, according to the county.

A chronically homeless person is someone who has been continuously homeless for at least one year or has had at least four episodes of homelessness during the past three years. Part of the reason for the Housing First program’s success is that it allows individuals to participate “on their own terms …they call their own shots,” Mathy said.

The “housing first” concept represents a shift in the way chronic homelessness is addressed. Traditionally, individuals would receive support services to help deal with the cause of their chronic homelessness — such as substance abuse, alcoholism or mental illness — before a home is made available to them.

“It is offering a homeless individual housing immediately and … barrier free,” he said. “Instead of waiting for individuals to be engaged in … treatment, we don’t worry about those preconditions anymore. We put them directly in housing and, once they are in housing, we wrap those services around them after the fact.”

Itzin, who lives in a one-bedroom apartment, said having a safe, stable place to live has “intrinsically” built his self-esteem, a necessary element in his battle against substance abuse.

Itzin said he has also been empowered by not having to deal with the bureaucracy typically found at homeless shelters in the city.

“I was always struggling with that adult supervision. I am an adult… but, I was always being watched. It robs you of your self-confidence,” he said. “I’m not being watched here so my decisions are my own — the good, bad and the ugly.”

The success of the Housing First program is based on providing a safe, stable environment for formerly homeless individuals, said Philip Connelly, director of housing at the Guest House, an organization that serves the homeless in Milwaukee.

“The flexibility of this program will allow for (individuals) to be successful in ways that, in the past, they were not able to,” Connelly said. “Once people are in a safe environment, they are comfortable, allowing service providers to build programs around the person.”

In addition to the social impact the program has had, Housing First is saving taxpayer money, county officials said. The program costs about $25 a day per person, which includes an average of $17.25 in rent and $7.50 for case management services. This compared to the $110 per day that is typically spent on detainment, law enforcement and emergency room services for chronically homeless individuals, several studies have shown, according to county officials.

The Housing First initiative received $1.8 million in funding for its first year, from the city, the city housing authority and the county. The limited availability of federal rental subsidies, a key part of being able to provide free housing to chronically homeless individuals, is a major challenge in reaching the county’s goal of eliminating chronic homelessness by 2018, according to Mathy.

“To get to the last 30 percent, this is probably our biggest barrier,” he said. “We do think we can get there, but we do need to find more rental assistance resources to see if we can get to zero.”