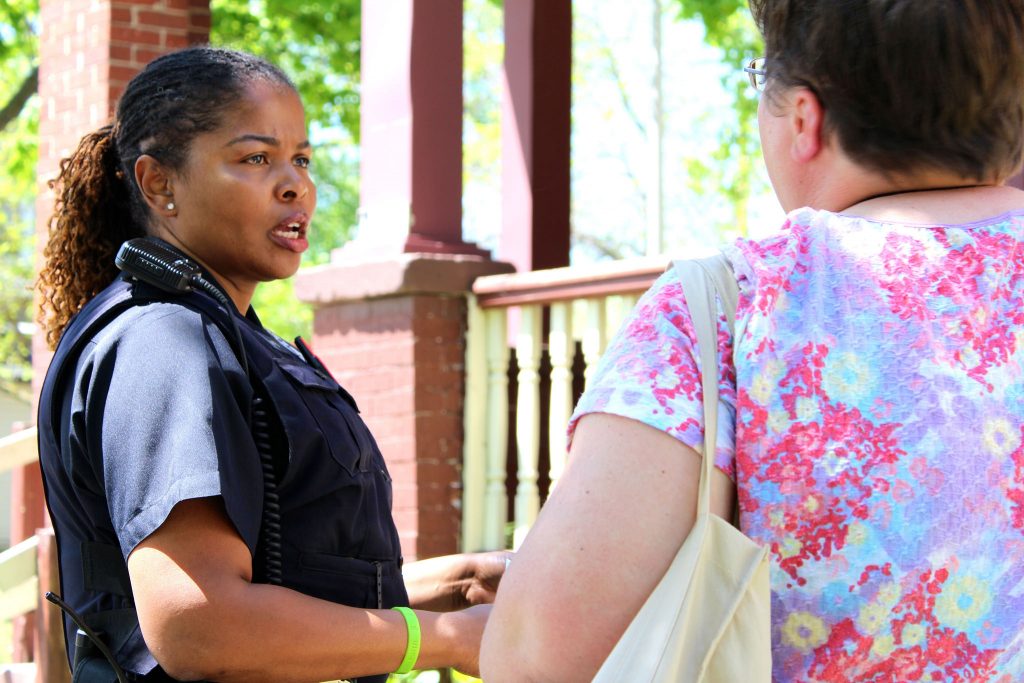 Sergeant Felmers Chaney, one of the city’s first African-American police officers, said of himself, “I’m big. I’m bad. But I’m fair.” He was trusted and respected in the black neighborhoods he patrolled decades ago. His memory was celebrated as an example of community-oriented policing at a forum that was part of the city-sponsored Bronzeville Week. First Stage hosted the forum at its home in the Milwaukee Youth Arts Center.

Artist Mutope Johnson, one of four panelists at the event, was born and raised on Fourth and Brown streets in the predominantly black Sixth Ward. He recalled his personal encounters with Felmers Chaney, a beat cop who patrolled the neighborhood on foot back in the 1950s.

Johnson recalled that he didn’t often see African-American police officers. “To see him walk through with the uniform on really gave credibility to who he was as a person and also helped the early stages of learning to trust officers and the role that they played in the lives that we were living,” he said.

Chaney was on the Milwaukee police force for 36 years. He’s become a symbol of community-oriented policing based on mutual trust between police and the citizens they serve, a trust that some say is missing for people of color in Milwaukee.

“How do communities of color trust these (officers) who are supposed to protect and serve when there really hasn’t been any public apology for mistreating black folks and Hispanic folks for years in this community?” asked one audience member. 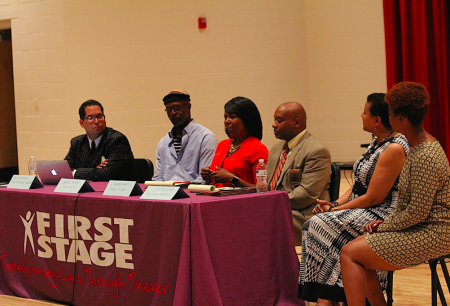 Police-community relations was the focus of a public forum organized by First Stage, Milwaukee Fire and Police Commission, Friends of Bronzeville and Alderwoman Milele A. Coggs. (Photo by Mark Doremus)

Clifton Crump, the Milwaukee Fire and Police Commission’s new operations manager, agreed that the city’s history of segregation and poor race relations are an obstacle. He added, “We have to start here and hopefully we can move forward,” he said.

“Police are human beings” and their attitudes can “harden,” said David Mohammad of the Milwaukee Health Department’s Office of Violence Prevention. But, he added, the police need to understand that there are many neighborhood residents who want and need their services and they expect to be treated with respect.

When Chaney joined the Milwaukee police force, there were just a handful of black officers. They are still under-represented in the ranks of the police department. In December 2015, the U.S. Department of Justice (DOJ) launched a voluntary review of the Milwaukee Police Department’s policies, practices and accountability systems. Already, the DOJ has recommended that the city look at its hiring practices to make sure it is “testing in” good candidates for police work, not “testing them out” with its hiring criteria.

Crump said there is no shortage of people of color applying to the police and fire departments. “We have thousands of people apply, and it’s like a funnel. By the time we get to the interviews we have a small pool that’s remaining,” he added.

The commission is looking at how it can modify the hiring process and is aware that good people are “being lost in the shuffle,” Crump explained. “(Some candidates) may have a lot of community service … be reliable, honorable. Right now that’s not really valued in the testing process,” he said.

As Johnson recalled, Chaney was closely connected to the neighborhood he patrolled.

“He knew so many families, even the kids … my folks in particular,” and he would speak to each of them, Johnson said.

That relationship allowed Chaney to turn over some youthful offenders to their families for discipline, instead of throwing them in jail.

Panelists and members of the audience also acknowledged that the community has a responsibility for enforcing good conduct on and off the streets. In response to a question, panelist and police Sgt. Sheronda Grant, representing the League of Martin, a local organization of black police officers, said calling the police should be a last resort.

“When police come in to the home or the school they come, for the most part, to disperse or arrest,” Grant said. If we have strong communities and strong families, there is less need for police intervention, she added.

According to Crump, strengthening the relationship between the police and the public has emerged as a high priority for the Fire and Police Commission.

“It’s a new day. We have a new executive director, MaryNell Regan, and we’re trying to get our own identity and our own relationship with the community,” Crump said.

Regan, whose appointment was confirmed by the Common Council a year ago, said then that her preferred approach is collaboration and education. She added that she wanted to be “out and about” in the community to educate citizens about the role of the Fire and Police Commission and to establish links with community members.

“The Fire and Police Commission is a civilian body,” Crump said. “We’re bound to have a direct relationship with the community. And that means we have to find out what the community’s thinking, what they’re feeling.”