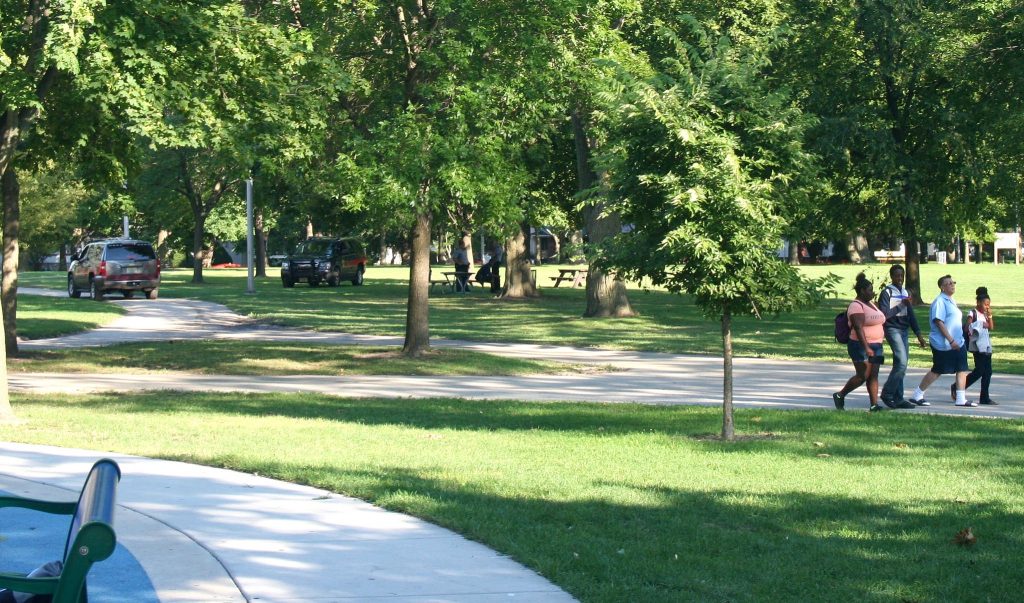 Nearly two weeks after demonstrations and violence swept through the Sherman Park neighborhood, a 6 p.m. curfew remains for the park, imposed by the Milwaukee County Sheriff on Aug. 15.

The early closing time has made it harder for neighborhood youth who have come to expect food and activities in the park, provided by a grassroots organization called Program the Parks. “A lot of them don’t have nowhere to go,” said Vaun Mayes, one of the organizers of the initiative. “A lot of them do not eat if we don’t feed them.”

Fran McLaughlin, who does media relations for the Milwaukee County Sheriff’s Office, said she didn’t know when the early closing order would be lifted and that the decision is up to Sheriff David Clarke.

Mayes, who has been working in the area since the beginning of June, said as many as 200 young people have attended the movie nights and barbecues he and others have held. Program the Parks feeds the youth at least three times a week, offering pizza every Friday and weekend cookouts. Food and drink are provided by in-kind and cash donations from the community; Mayes and others involved volunteer their time.

On a recent afternoon, only a few young people have come to engage with Mayes and the others; he digs in his pocket to hand many of them a few dollars to get them by for the night.

Mayes said a lot of the youth are homeless, and some have previously slept in the park. Niekale Steward, 15, added that youth open up to people in the group about their circumstances. Steward used to live in the area and still comes to the park whenever the group hosts an event. 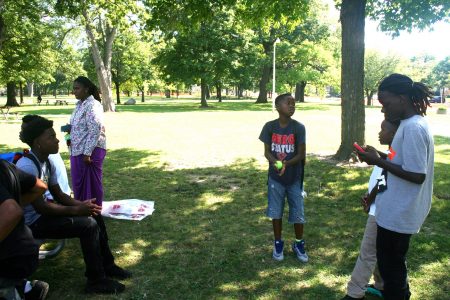 “You can’t see it on a lot of their faces, but if you go into their homes, into where they live, you will see poverty just everywhere,” said Marcus Duke, founder of Club Kids, an organization that works with youth through events and other programming. Duke said some children sleep on the floor, have no electricity and have no food at home.

According to Charles Edwards, 51, children come to the events “because … they know somebody cares.”

With the park being closed early, many of the youth have nowhere to go, Mayes said. “You push them out of here and put them in the community, they’re going to probably go in a gas station and do a snatch-and-run, they’re probably going to steal somebody’s car so they can get somewhere,” he said. “People do a lot of shit that they wouldn’t do … when they’re in need.”

Steward said he’s heard about more thefts from his friends since the curfew has been in effect — he said they are most likely because youth are hungry, or bored. “What is there for kids to do after they close the park down at 6, go back home to the streets?”

Mayes decided to patrol Sherman Park regularly after seeing a video on Facebook in late May of law enforcement closing the park early. After he shared the video, responses from residents were all similar: that law enforcement was right to do that because the kids would often fight and cause other trouble.

So, Mayes began to monitor the playground area just off Sherman Boulevard, intervening in and preventing fights. After some time, others joined Mayes and their work began to have an effect — the kids stopped fighting because they knew the adults wouldn’t let them. Some of the youth joined in, and began dissuading their friends from engaging in conflicts.

According to Mayes, at first, sheriff’s deputies were grateful for the help but, after an incident at the end of June when youth threw rocks, damaging a city bus and a window of the gas station that was eventually burned, the mood among law enforcement officers changed.

He said some officers “can accept that we’re needed just like they’re needed.” Mayes said other officers regularly antagonize youth, and that Milwaukee Police Department (MPD) officers and sheriff’s deputies police Sherman Park more heavily than other parts of the city.

In an email response, MPD Sgt. Timothy Gauerke said officers “frequently elect to issue warnings in lieu of a citation” and that the elevated police presence is “due to the volume of calls for service and the levels of crime that are afflicting the residents in that area.”

Gaurke continued, “Residents at community meetings, especially in more disadvantaged areas, are frequently asking for additional patrols in their neighborhoods. They want police to address issues like gunshots being fired, armed robberies, drug dealing, and other issues that affect their quality of life and ability to use their public spaces.”

Jimmy Pitts, 16, who spends every day from morning until night at Sherman Park, said, “I just want the police to go, so we can have our park back.”

Mayes, himself, had a long record as a juvenile. He stole cars, was involved in robberies and faced a charge involving a firearm. “I was worse than any of them,” said Mayes, who was homeless at age 14. “When I didn’t have to do that no more, I stopped doing it.”

“I had people that looked out for me, like we’re trying to do for them,” Mayes said.

“There’s two things that the kids need … they need some money in their pocket and they need something to do with their idle time,” said Duke, who brought Brewers tickets for the youth.

Steward said Program the Parks has helped many disadvantaged youth, even setting some kids up with jobs. But he said young people need more opportunities, “something to do other than negativity.”

However, Duke said it’s difficult for grassroots groups to have the kind of impact they could, because funding is tough to come by. “The red tape is ridiculous,” he said.

Municipalities and grant-giving organizations need to change their process, according to Duke. While large organizations have more capacity to pursue funding and create “fancy” proposals, he said, the grassroots organizations are doing the work, and understand the needs of those they’re serving.

Editor’s note: This story has been updated to correct the date that the curfew was imposed.