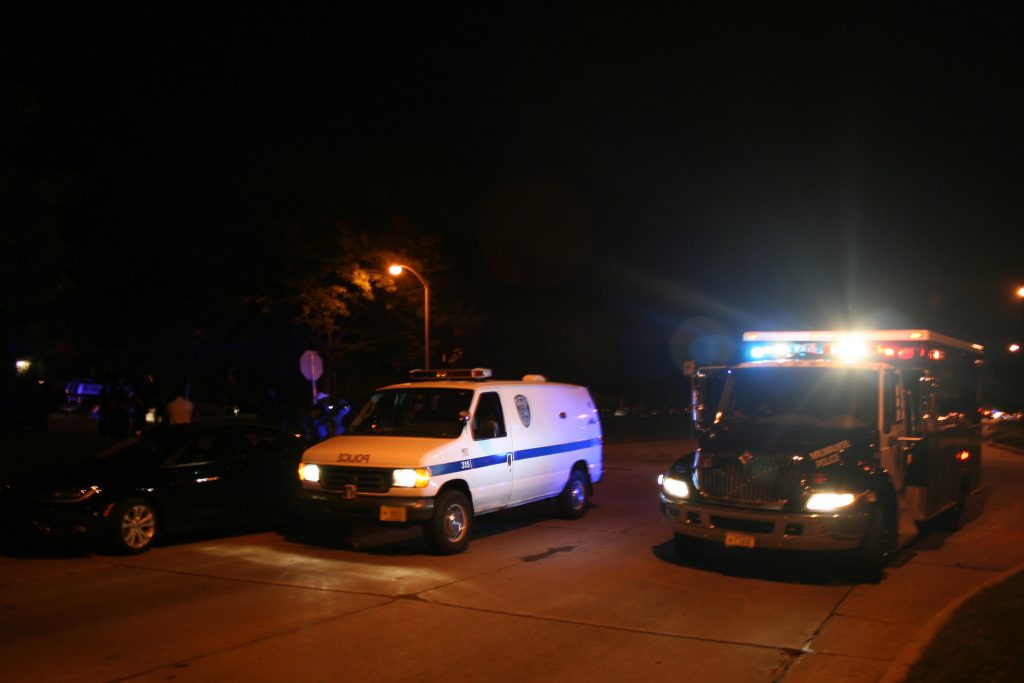 State Rep. Jonathan Brostoff and Jarrett English, a youth organizer and police accountability associate at the ACLU of Wisconsin, were arrested and briefly detained by the Milwaukee Police Department (MPD) in Sherman Park Tuesday night.

“I didn’t do anything wrong. Neither did Jarrett,” said Brostoff, who was forced to the ground and handcuffed with zip ties by MPD officers “even though I said I was being totally compliant.”

Earlier, officers dispersed a group that had gathered at a memorial for Sylville K. Smith, who was killed by an MPD officer Aug. 13. Eleven individuals were arrested for charges including disorderly conduct and resisting an officer after police said they would not leave the area. Community organizers Frank “Nitty” Sensabaugh and Vaun Mayes were among those arrested; all were subsequently released.

Police did not give a reason for the arrests of Brostoff and English. Eventually, both were released after MPD Inspector Stephen Basting spoke with State Rep. David Bowen, who was also at the scene.

In an email, MPD Sgt. Timothy Gauerke said, “Milwaukee Police are investigating the circumstances surrounding these arrests to ensure proper procedures were followed.”

“If I had a different job they would’ve taken me in,” Brostoff said, adding that MPD wanted to detain English but that Brostoff made it clear he would not leave without him. “Just because he has a different job than me doesn’t mean he should be arrested — he didn’t do anything wrong.” 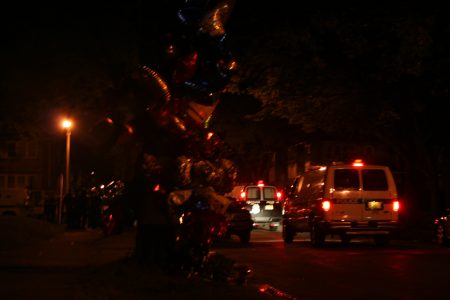 Milwaukee police patrol a memorial for Sylville K. Smith, who was shot by an MPD officer more than two weeks ago. (Photo by Jabril Faraj)

Brostoff, who was in the area to speak with residents, take policy recommendations and help de-escalate a tense situation, said “the focus should not be me.” He said this incident should be used as an opportunity to address “the systemic issues that are leading to all of this,” including racial disparities in education and economic opportunity, which have resulted in high rates of black male unemployment and incarceration in Milwaukee.

English, who is black, called the experience “confusing,” “embarrassing” and “dehumanizing,” but said he wasn’t worried because he knew people were making calls on his behalf. “I think about the 15-year-old kids, 13-year-old kids who don’t have nobody to call … and just how intimidating and how terrifying that must be,” he said. “And we know that that happens a lot in Milwaukee.”

“This is not happening in a vacuum,” Brostoff said. “There’s a larger set of circumstances that should be a constant focus until they’re fixed.”

Since Smith’s death, people have consistently gathered at a memorial erected for him on the south side of W. Auer Avenue. Gauerke said police have received complaints from residents about disorderly groups gathering into the late night.

About 9:30 p.m. more than 40 officers had blocked off W. Auer Avenue; Sherman Boulevard was blocked off at W. Burleigh Street and on the north end by police vehicles, as well. At least 20 officers and five police vehicles patrolled the corner of Auer and N. 44th Street as late as 10:45 p.m.

“We got direction from the alderman (Khalif Rainey) that the neighbors have had enough,” said Basting. “This has been going on for about two weeks — the memorial, the dope smoking, the loud music, the garbage … on the neighbors’ porches, taking over the intersection.”

Basting added, “I’ve got to tell you: I couldn’t live there.”

Barry Givens, 67, who lives on the corner of Sherman Boulevard and Auer Avenue, said both residents and those visiting the memorial have rights. “I can understand the family [is] grieving, but at some point you’ve got to consider the residents in the area,” he said.”

Givens said he was not aware that any residents had made complaints, and said he did not call police. Rainey did not respond to multiple requests for comment.

Some residents said they understand that there needs to be peace and that officers are probably afraid for their safety, but that the response of law enforcement can be “over-reactive” and provocative, nonetheless. Givens said he was glad the situation did not escalate.

Basting said MPD would not take the memorial down but that police would “keep a presence in the neighborhood, and hope we get compliance.” “It’s … this group of kids; it’s their decision what happens next,” he said.

“We know they’ve got a hard job,” English said, referring to police. “But it can’t keep going like this. There’s no way that any of that — more cops, more riot gear and all of that — ain’t none of that going to solve any of this, period. And, if they keep going down this route, it’s just going to get worse.”

English said the recently released preliminary public safety plan that calls for 280 police officers to be hired is, “a disaster before it even begins.”

Brostoff said it’s important to “seriously re-focus our efforts from punitive to preventative.” He called for the City of Milwaukee Office of Violence Prevention to receive an “appropriate level of funding.”

“That’s the whole idea of prevention,” Brostoff said. “By the time it happens it’s already too late.”

Editor’s note: This story has been updated to delete quotes from Ghetto the Director.