You are here: Home / Community Voices / Taco trucks and voter education
Share this... 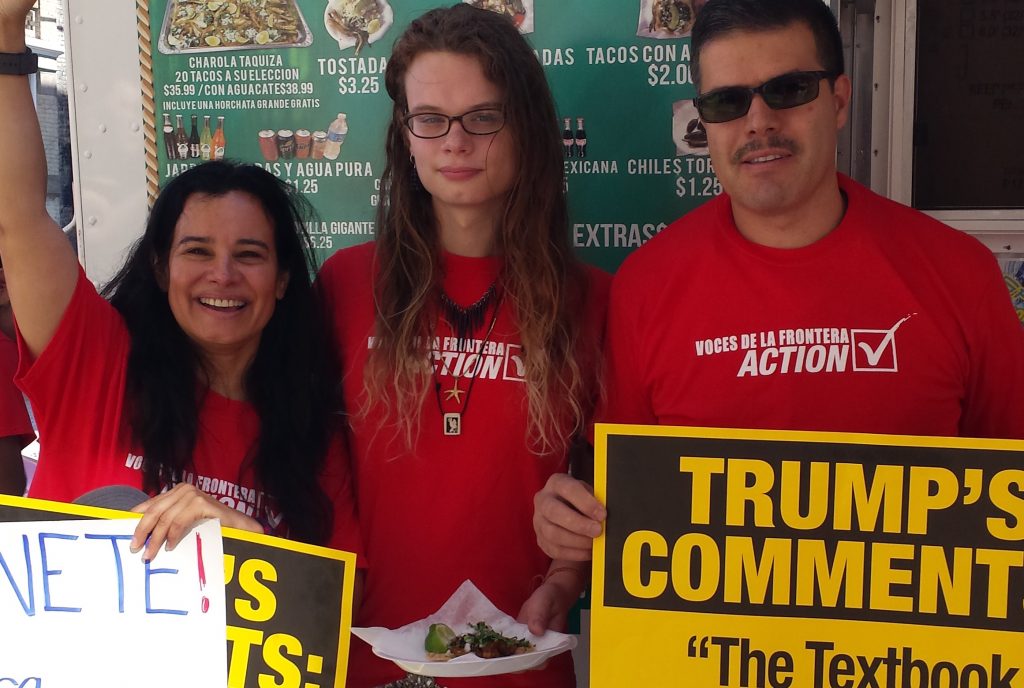 Margaret Rozga, poet, civil rights activist and professor emerita of English at UW-Waukesha, finds the dire warning of “taco trucks on every corner” issued by a Latino Trump supporter no threat at all.

A taco truck on every corner? What’s not to like? Among the people I talked with recently and the many who posted comments on social media, a taco truck on every corner is the best idea to come out of the Trump campaign. Marco Gutierrez, founder of the group Latinos for Trump, no sooner publicly issued this taco truck threat in what he apparently thought would be received as a dire warning than he found his comment going viral, not because it frightened anyone or rang true, but “because it just sounds delicious.”

Many loved the idea of a taco truck on their corners as a way to help ease some of their pressures. Take, for example, the young mom, a teacher, who leaves home at 7 a.m. so she has time to get her classroom ready for the day and isn’t home again until almost 5 p.m. A taco truck on her corner? A dinner sent from heaven! Or consider my friend who was struck by a car while bicycling. He is finally home from the hospital but needs a lot of care. His family, too, would welcome a nearby taco truck. Even those with less frantic situations, such as my colleagues who retired from cooking when they retired from their full-time jobs, relish the thought of a taco truck or two on their corners.

For the activists of Voces de la Frontera Action concerned about the serious racial baiting the Trump campaign thrives on, the Gutierrez comment added a delicious flavor to the canvassing project they had planned for Saturday, Sept. 3. As part of their long-term voter education project and get out the vote efforts, they planned to canvass in near South Side neighborhoods to talk with Latino voters about election issues.

According to Christine Neumann Ortiz, director of Voces de la Frontera Action, the goal is to mobilize voters “to reject this hate and racism on Nov. 8th.” Volunteers gathered at their office, 1027 S. 5th St., to organize canvassing teams and to enjoy, yes, delicious food from the Cabrito taco truck. Francisco Salazar, owner Taquería El Cabrito, 1100 S. 11th St., who was on hand to help serve, also donned a Voces de la Frontera Action t-shirt to get into the upbeat spirit of the day.

The focus of attention on voting makes sense. According to a Pew Research Center survey, “Hispanic Voters and the 2016 Election,” there are about 27.3 million adult Latino U.S. citizens eligible to vote. They are projected to make up 12 percent of all eligible voters. Given that the poll found Hillary Clinton holds a 66 percent to 24 percent lead over Donald Trump among Latino registered voters, the Latino vote could be a deciding factor in the election. Concern arises, however, from the fact that “voter turnout among Hispanics has long lagged that of other groups,” according to the Pew report.

That lag may be in the process of being reversed. A majority of Latino voters (63 percent) said in the Pew Research Center survey that “they are more interested in politics than they were in 2012.” The work of the volunteers at Voces de la Frontera Action is designed to raise interest and continue this trend. If the unexpected gift of a national joke about taco trucks also helps stimulate interest in the election and voter turnout, we’ll have Marco Gutierrez to thank.

On the beautiful Saturday morning of the last weekend of summer, I had Christine Neumann Ortiz to thank. She recommended the taco al pastor. It was delicious. I plan to seek out El Cabrito again since its truck doesn’t appear on my corner. Not yet. And I’d welcome a vendor of paletas, those flavorful fruit-based frozen treats, in my neighborhood as well.