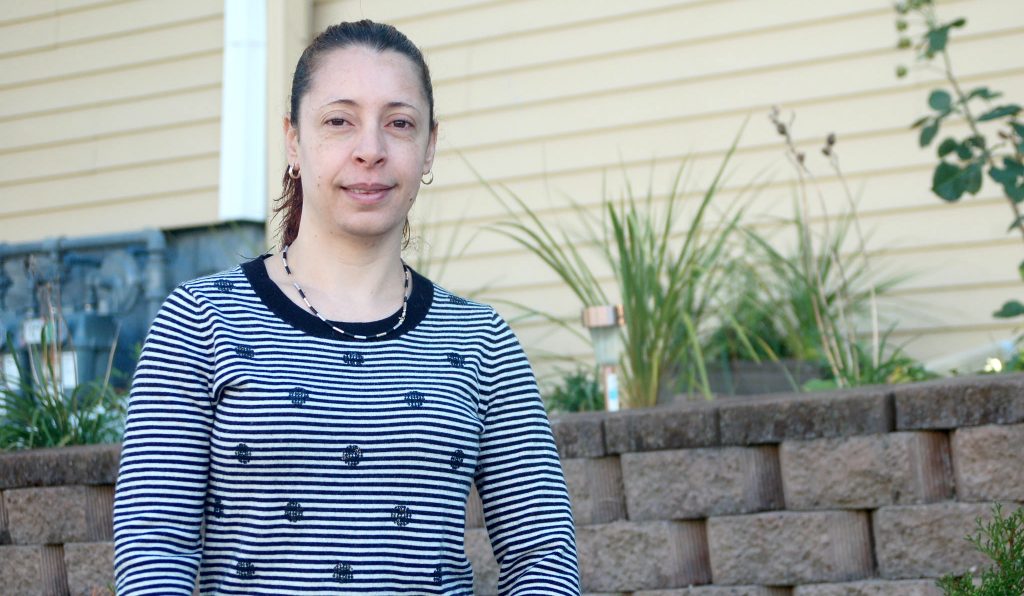 The Department of Neighborhood Service’s Code Loan Program provided a no-interest deferred loan of more than $12,000 for repairs on Maria Alvarado’s home, including a new deck, stairs and a brick retaining wall. (Photo by Edgar Mendez)

In late 2014, Maria Alvarado bought her first home, a foreclosed duplex in the Burnham Park neighborhood that she knew was a fixer-upper.

“We had the ceiling, floors and walls repaired, put in new doors and fixed a lot of other things,” said Alvarado in Spanish.

Later, contractors were hired to reinforce the deteriorating porch and balcony leading to an upper entrance. That’s when Alvarado’s problems began. She never secured a permit for the work, which was not in compliance with the city’s fire code. Eventually, an inspector from the Department of Neighborhood Services (DNS) levied a $1,430 fine against Alvarado and ordered her to rebuild the porch, among other fixes.

She was devastated. Already in debt from the other repairs, she put in extra hours at work to earn the money to pay the fine. That put a huge strain on her budget and knowing that a new porch would cost thousands more put a strain on the rest of her life.

“I couldn’t sleep at night. I thought that just having steps that got me downstairs was enough and now I had to pay for a new porch with no money,” Alvarado said.

Across the city in a home near Rufus King High School, Joann Henning, 74 years old and retired, was mired in similar circumstances. A contractor she hired to repair her roof never finished the job. She lives on a fixed income, and didn’t have the financial means to complete the repairs. The unfinished roof netted Henning code violation fines along with fines for her water heater and gutters. 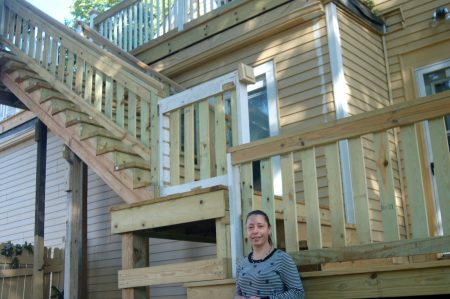 Maria Alvarado stands at the base of the staircase and upper deck built with funds provided by the Department of Neighborhood Service’s Code Loan Program. (Photo by Edgar Mendez)

“I’d already used up the little monies that I had on the people who didn’t finish the roof. I didn’t know what to do,” Henning said.

Both women were urged by the inspector to apply for the city’s Compliance Loan Program (CLP), a DNS program started in 2014 that helps owner-occupants by providing a no-interest deferred-payment loan to finance repairs needed to bring homes up to code. Their orders to repair were put on hold during the application process and months later, both were accepted into the program.

The program covered more than $12,000 in repairs on Alvarado’s home, including a new staircase, front porch, handrails, retaining walls for the driveway, a chimney and new gutters. It covered nearly $15,000 in repairs to Henning’s home, including replacing the roof down to the shingles, doing gutter work, and repairing a bathroom floor and a broken water heater

The homeowners won’t have to make any payments as long as they don’t sell the home.

“They can deed it down to other family members who won’t have to pay it back unless they sell the house,” said CLP coordinator Ross Matters.

This year 35-40 homeowners will benefit from the program. Loans range from $1,000 to $15,000. The applicant’s total household income may not be greater than 50 percent of the County Median Income (CMI) based on current federal HUD thresholds. In 2015, 50 percent of the CMI for a household of four was $36,650. Homeowners must also be up to date on all utility payments and property taxes and meet other eligibility guidelines, including having an open code violation order.

Once a homeowner is accepted into the program, the city inspector creates a scope of work, which contractors bid on.

“The repairs they do are not Band-Aids or patchwork; these are long-term products that help improve the look of the homes and the neighborhood,” Matters said.

According to Ian Bautista, executive director of the Clarke Square Neighborhood Initiative, the repairs are the result of effective DNS outreach in the community. Bautista said Matters regularly attends meetings of Rebuilding Our Neighborhood, a four-neighborhood partnership that meets to strategize and work together on housing efforts.

“Ross has been very accessible to all of us and very eager to come to our neighborhoods, meet with neighbors, answer questions and to assure that the neighbors know that the city is there to help them, not punish them for challenges they may be facing,” Bautista said.

Matters attended a recent housing resource fair at Journey House, encouraging neighbors to make exterior improvements to their homes, especially for properties that have code violations.

According to Stephanie Samarripa, DNS community outreach specialist, the department is making a concerted effort to be visible and active in the community, attending events such as housing fairs and informing residents of the many housing resources available in the city.

“We want to let as many residents as possible know about programs like CLP,” Samarripa said.

For Alvarado and Henning, those outreach efforts could have been the difference between keeping their homes or being forced to sell them.

“I felt so blessed to not have to worry about losing my house that I lit a candle and thanked God. Look how great everything looks,” said Alvarado, while standing on her new deck.