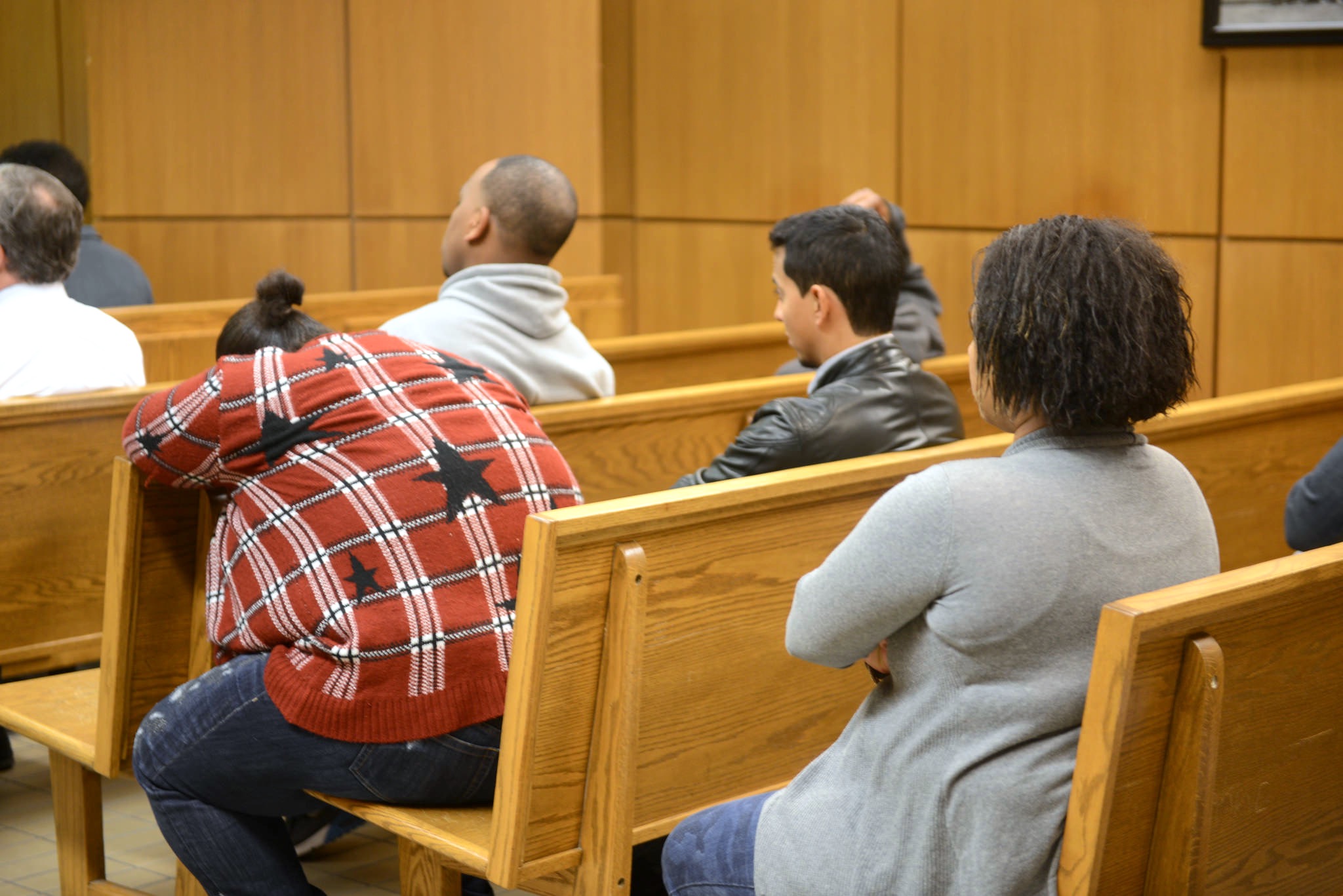 People wait for court proceedings to begin inside a Milwaukee Municipal courtroom. (Photo by Sue Vliet)

Milwaukee Municipal Court data obtained by the Wisconsin Justice Initiative (WJI) shows huge racial disparities in the number of defendants, number of cases and the amount of judgments owed to the city as a result of municipal violations. The data spans a 4-1/2 year period, from Jan. 1, 2012 through May 31, 2016.

In 184,845 municipal court cases in which money was owed to the city as of May 31, 73 percent (38,307) of the defendants were African-American. Whites were the next largest group of court debtors; 6,439 owed money. In total, African-Americans owed $23.2 million of the $31.6 million, or 73 percent, in outstanding debt. African-Americans make up 40 percent of Milwaukee’s population.

Most of the defendants were residents of low-income neighborhoods on Milwaukee’s North Side.

The majority of municipal court cases arise from citations issued by the Milwaukee Police Department. The Department of Public Works, Department of Neighborhood Services and other city departments also issue citations. 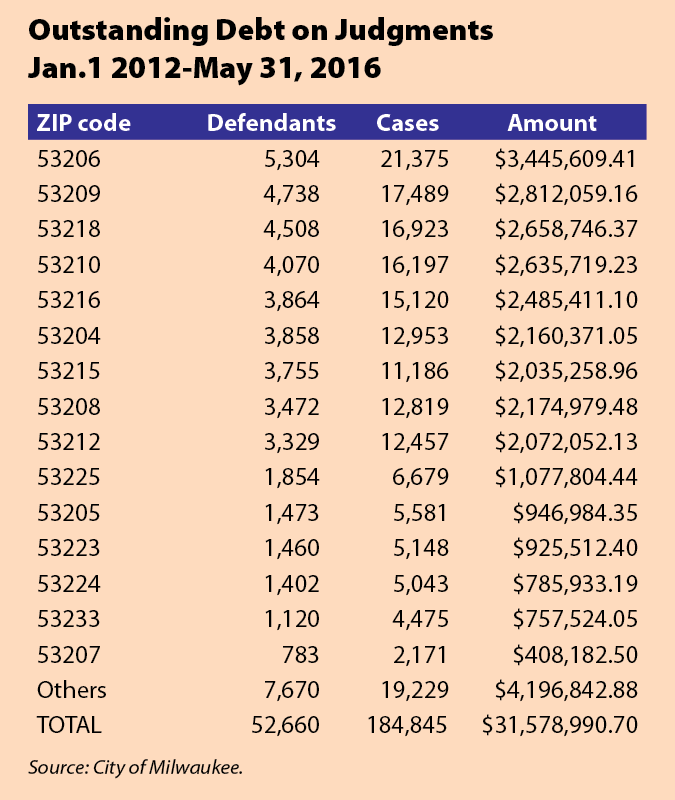 The top five ZIP code areas in terms of both defendants and cases are all located on the city’s North Side.

Pepper Ray, who works with residents of 53206 and nearby areas in her role as Building Neighborhood Capacity Program coordinator for Amani, said municipal court cases and fines place yet another burden on the residents she serves.

“It’s frustrating because if you don’t pay the fines, warrants are issued for arrest and with that on top of other daily issues, you feel defeated. Like the system ain’t fair,” Ray said.

Fred Royal, president of the Milwaukee NAACP, said the fines are creating more barriers to employment, leading to suspended licenses and incarcerated individuals.

“What the municipal system in the city has done is create a debtors’ court for individuals who are indigent and shouldn’t be assessed these fines in the first place,” Royal said.

The Milwaukee NAACP has been working with the Wisconsin Justice Initiative and other partners to look at the municipal court system. Among the questions is whether judges are informing low-income residents of their right to request an indigence determination, which would allow them to receive an alternative judgment such as community service if they can’t afford to pay a fine.

A March 2016 memo from the U.S. Department of Justice’s Civil Rights Division stated that, “courts must not incarcerate a person for nonpayment of fines or fees without first conducting an indigency determination and establishing that the failure to pay was willful.” 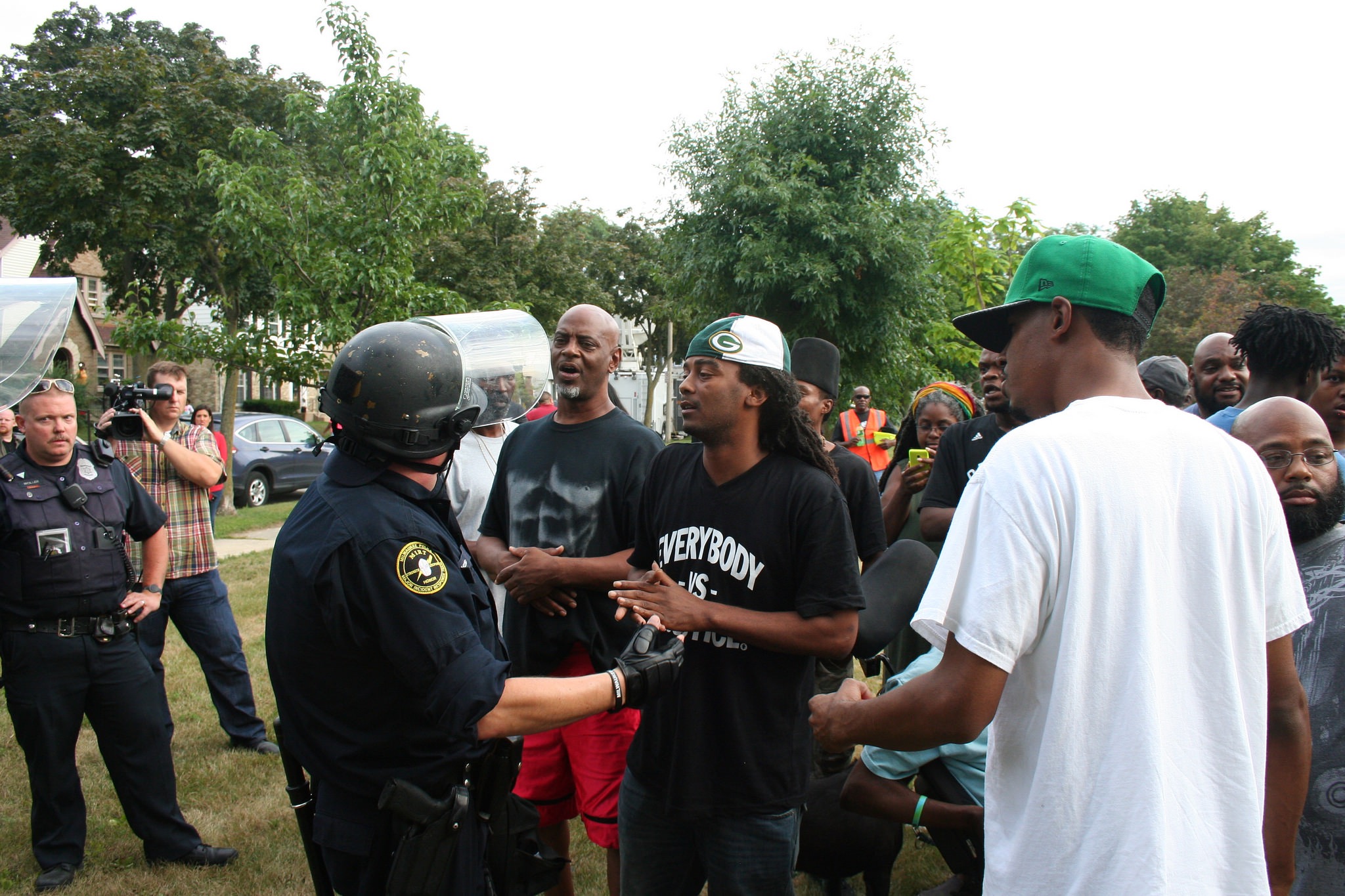 Overpolicing of North Side neighborhoods harms efforts to improve relations between police and the community, according to Milwaukee NAACP President Fred Royal. (Photo by Jabril Faraj)

On Friday, the Common Council will be voting on a resolution supported by Schuldt, Royal and others that would provide $55,000 to fund legal representation for defendants in municipal court cases. Schuldt said that having an attorney consistently in court to represent defendants would serve as a reminder to judges about their obligation to inform defendants if they qualify for alternative sentences.

“Putting people who can’t afford to pay fines in jail is a violation of their rights,” Schuldt said.

Ald. Terry Witkowski, a member of the city’s Outstanding Debt Task Force, said he is voting against the resolution. Witkowski said defendants already have avenues for representation. These include JusticePoint, which provides financial evaluations to the court to identify individuals who are indigent; facilitates community service referrals; and helps establish links to services such as mental health or addiction treatment for defendants already convicted of municipal ordinance violations.

The debt task force was created to help collect money owed to the city, including from municipal court cases, said Witkowski. Part of the problem, he said, is that defendants are not showing up to court. They are being found guilty without having an opportunity to set up payment plans or be sentenced to community service.

Witkowski added that when it comes to traffic, parking and other citations, individuals have a choice.

“They’re choosing a behavior that is contrary to what the code or ordinances said and what has been decided on as conduct for society. It’s a matter of ‘don’t get fined in the first place,’” Witkowski said. He argued that the Tax Refund Intercept Program demonstrates that even defendants who live in high-poverty areas have the means to pay fines.

“If they get their taxes intercepted to pay off what’s owed to the city, that’s proof that they do have income,” he added.

Still, he said, it’s not the Common Council’s role to determine who can or cannot pay fines. The job of the task force is to collect what is owed to the city for outstanding citations. He added that he is concerned about the issues that arise when defendants lose their access to a driver’s license, and said he supports a free driver’s education pilot program being offered in some Milwaukee Public Schools. 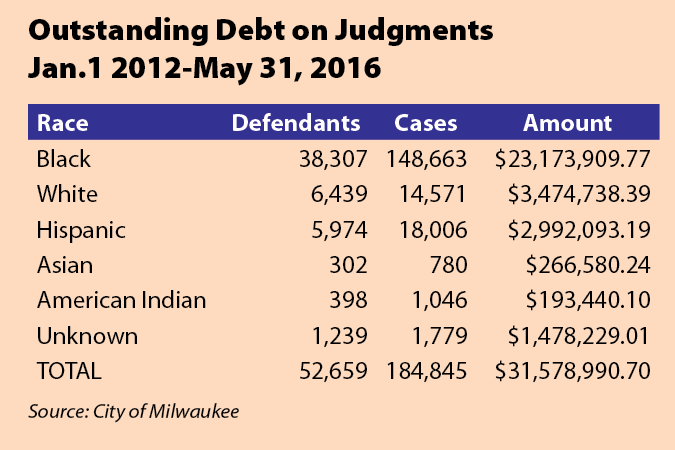 That the majority of municipal citations affect low-income African-American neighborhoods undermines efforts to improve relations between law enforcement and community members, according to Royal.

“When you feel like you’re an occupied community you have resentment and anxiety that build up in you, which diminishes the amount of trust you can place on law enforcement,” Royal said.

Policing strategies, such as saturation efforts in high-crime communities are not effective, he added. More effective would be looking into root causes of violence rather than looking at everybody as a potential criminal.

According to Molly Collins, associate director of the ACLU of Wisconsin, Milwaukee policing strategies appear to be disproportionately targeting communities of color, particularly the African-American community. The huge disparity in tickets is the result of concentrated police presence in particular neighborhoods, she said.

Collins said millions of dollars are being removed from communities where the average annual income is often less than $21,000. “It is unfair and unjust to target poor residents of color for multiple and excessive fines that they are often unable to pay.”

The city’s three municipal court judges recently offered anyone with a City of Milwaukee municipal warrant an opportunity to come to court on the first three Wednesdays in November to have their warrants lifted. The subjects of these warrants may face the threat of arrest, loss of their driver’s license, debt from paying tickets or even unemployment because of their status, according to a press release issued by Ald. Khalif Rainey. Defendants will still be responsible for their fines, but aren’t required to make a payment when they come in that day, the judges said.

The overall number of municipal court cases has fallen 47 percent, from more than 127,000 cases in 2012 to 67,000 in 2015. Total judgments against city residents decreased 38.5 percent, from $16.6 million to $10.2 million during that time period. But the amount of money owed by city residents dropped only 9.4 percent, from $7.25 million in 2012 to $6.57 million in 2015. According to Royal, the decrease in the number of cases can be attributed to fewer traffic citations being issued in the city. That isn’t stopping police from issuing other types of tickets though, he said.

“They still have their hot spot, broken windows theories of policing, which focus on quality-of-life issues,” Royal said.

The end result for defendants is that they are caught up in a flawed municipal court system, according to Schuldt. Resolving those multi-faceted problems will necessitate a response from municipalities, the county, law enforcement and others, she said.

Editor’s note: Milwaukee Neighborhood News Service is partnering with the Wisconsin Justice Initiative to report on the Milwaukee Municipal Court.