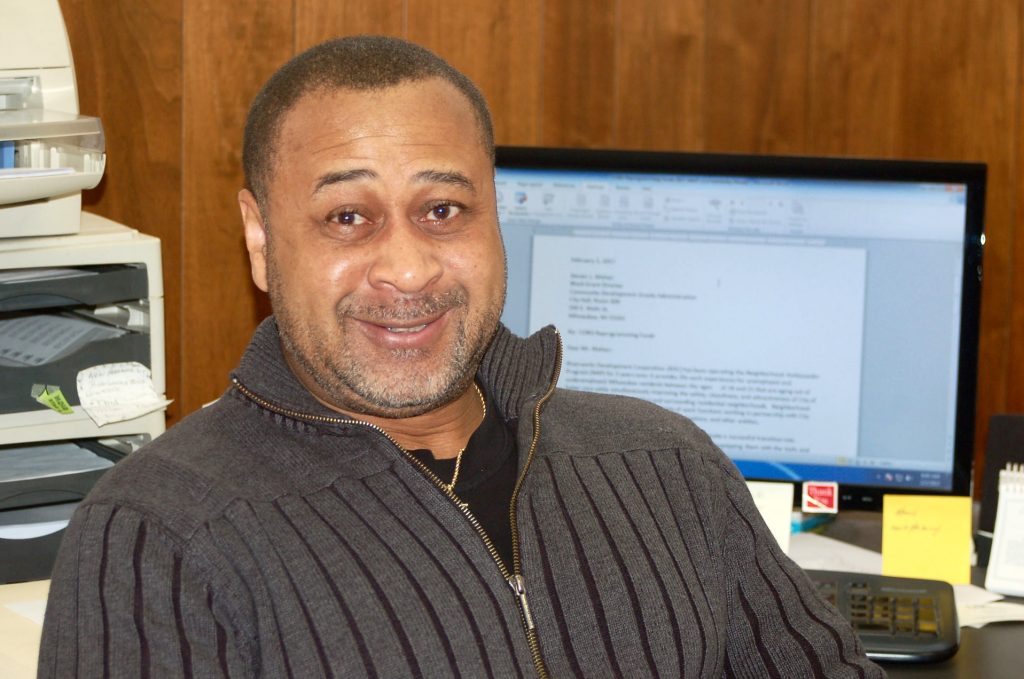 Darryl Johnson, executive director of Riverworks Development Corp., heads an effort that has resulted in millions of dollars in development and initiatives that have improved the quality of life in the Harambee and Riverwest neighborhoods. (Photo by Edgar Mendez)

Editor’s note: This article is one of an occasional series profiling the 15 finalists for the Milwaukee Awards for Neighborhood Development Innovation (MANDIs). Darryl Johnson is a finalist for the Northern Trust Navigator Award, which recognizes an individual for leadership and collaboration.

Like other neighborhoods in Milwaukee, the North Side neighborhood of Harambee was devastated by the departure of major industrial companies in the 1990s. The mass exodus left thousands jobless and a glut of empty industrial buildings in the neighborhood.

Two decades after the collapse of the area’s industrial economy, Darryl Johnson, who grew up in Harambee, is guiding its revival as executive director of Riverworks Development Corp. (RDC), the development wing of Riverworks Center, 526 E. Concordia Ave. The two-pronged entity also includes the Riverworks Business Improvement District (BID).

Among Johnson’s accomplishments was working to secure a major grant from the Kresge Foundation, along with the Greater Milwaukee Committee (GMC), to fund art and cultural programming for the area’s most influential project, the Beerline Trail.

The Beerline Trail, a multi-use recreational trail, started as a trash-strewn railway corridor. The trail was extended into Harambee and Riverwest in 2015. The two neighborhoods had previously shared a border, but little else, before being connected by the trail, Johnson said.

“The neighborhoods were isolated from each other. It was almost like the haves and the have- nots. We needed to find ways to engage residents of both areas with each other,” said Johnson, 57.

The trail has become a catalyst for several other projects in the area including the ARTery, a blighted plot of land along the trail that is now an active public space that hosts art exhibits, performances and other events that connect residents from both neighborhoods. The ARTery project is a partnership among Riverworks Center, Greater Milwaukee Committee (GMC), Greater Milwaukee Foundation, Still Waters Collective and several other organizations. 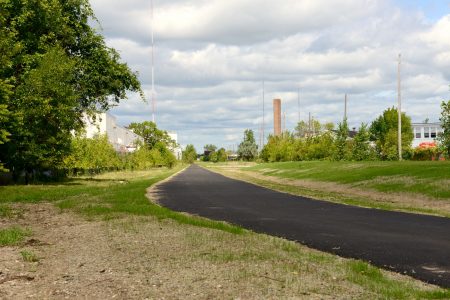 The Beerline Trail was extended into Harambee and Riverwest in 2015. (Photo by Sue Vliet)

Julia Taylor, president and CEO of GMC, said Johnson fits the definition of an unsung hero. The GMC has been working with Riverworks Development Corp. to establish a creative district by developing programming and entrepreneurship opportunities along the Beerline Trail.

“The work he’s done over the past 10 years to stabilize and grow that community has been one of those success stories that nobody knows about because it’s taken so long,” Taylor said. She said Johnson has been a key force for urban development in the area.

His ability to build partnerships with other organizations has brought more than $15 million in investments into Harambee and Riverwest, according to Steve Adams, RDC board chair. Those investments include the creation of the Riverworks Lofts, 3372 N. Holton St., a former spaghetti factory.

“His success in spurring investments and building partnerships has helped create high-quality housing options for local residents,” said Adams, who also pointed out the addition of several new businesses in the area.

Johnson, who previously founded the Parkside Housing Cooperative and was executive director of Lisbon Avenue Neighborhood Development, also has prioritized the growth of human capital by creating a Financial Opportunity Center within Riverworks. The center provides personal and career coaching, workforce development training, and financial and benefits coaching. According to Johnson, the services were created after leaders realized that creating job opportunities in the area wasn’t enough.

“When we started workforce development we were placing people in jobs but we weren’t preparing them to be successful,” he said.

Through partnerships with the City of Milwaukee, Employ Milwaukee and other nonprofits, Johnson also helped launch Neighborhood Ambassador and Youth Ambassador Programs in Harambee. The ambassadors are tasked with street cleaning and facilitating resident engagement, while receiving job training. The programs help remove employment barriers and build soft skills for unemployed or underemployed individuals and those aging out of the foster care system.

“He’s mastered an understanding of the strengths of Riverworks, so he knows when to take the lead on projects, and also what types of complementary pieces are needed,” said Carl Nilssen, Riverworks BID chair. The organization’s staff has grown from five to 19 since Johnson started there in 2003.

Another jewel in Johnson’s plan to improve the quality of life in the neighborhood is the 14,000-square-foot Riverworks City Center, 3334 N. Holton St. In 2016, Riverworks closed on financing to develop the new retail center, which will eventually house the organization, other nonprofits and retail businesses including Family Dollar.

The development also will allow for expansion of the Financial Opportunity Center and Riverworks Cleans, a social entrepreneurship project, Johnson said. The first business to be launched through Riverworks Cleans is a laundromat, which is set to open in April and will employ four people, he added.

Despite the many positives recently, Harambee continues to face many challenges, Johnson said. “There’s still not enough activities for young people; too many boarded-up houses and commercial buildings.”

But the vibrancy is returning. It’s coming back as jobs become available, and as residents receive job training, have access to better housing and become more engaged, he explained. As he sat in his first floor office, Johnson pictured himself walking down the street and chatting with people in Harambee seven years from now.

“I want people to say, ‘I live in the Harambee neighborhood,’ and say it with pride,” Johnson said.