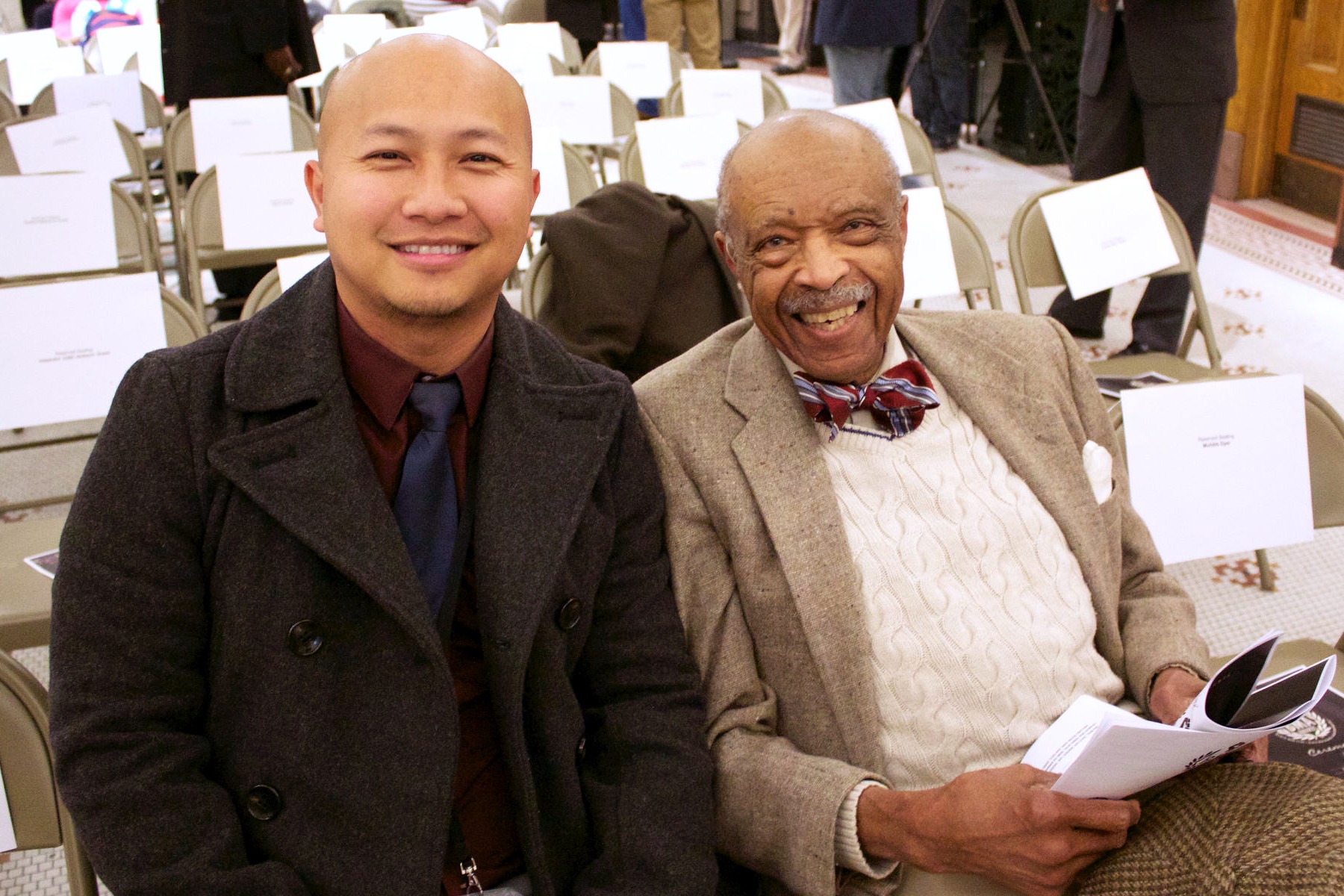 “Doctor” Lester Carter (right), seated next to Bon Her, received a Black Men Achieve Award on Feb. 23. Carter was presented with a Living Legacy Award the next day. (Photo by Emmy A. Yates)

I went to the inaugural Black History Month celebration in the City Hall rotunda on Friday, Feb. 24, at the urging of my daughter who recently re-connected, thanks to Facebook, with her middle school classmate, Chantia Lewis. In their recent conversations, they realized what they hadn’t realized in middle school: both their mothers had been members of the 1967 NAACP Youth Council that marched for 200 consecutive nights for national and local open housing legislation. I went to another event, the 32nd Black Excellence Awards dinner, the evening of that same day to join in honoring another person important to those open housing marches, Fred Reed.

I’m glad I went. Though the full-capacity attendance at each event prevented me from greeting either person I came to see, I saw something equally important: an impressive showing of the depth of talent in Milwaukee’s African-American community. It also showed me how celebrations build community.

The brainchild of my daughter’s friend, now Alderperson Chantia Lewis, the Black History Celebration began with a spirited drumming procession from the second floor down to the crowded rotunda. Lewis and Milele Coggs served as moderators for the afternoon-long event and were praised by Mayor Tom Barrett as being women who put talk into action. The mayor also noted how buoyed he felt at the event’s joyous spirit.

Performances by the Nefertari African Dance Company made that spirit of joy palpable. Members of the Milwaukee Youth Council, a city-wide group including one representative from each aldermanic district, furthered that spirit as they portrayed national figures from African-American history, including Carter G. Woodson, the founder of African-American history month, and delivered speeches affirming the values of freedom and racial justice.

Also part of the program was the presentation of Living Legacy Awards, recognizing local African-American civic leaders. Spencer Coggs, recipient of the first of these awards, shifted attention from his own 35 years of public service as an elected official to other members of the Coggs family, Isaac, Marcia, Elizabeth, and Milele, who served or are serving in public office as well. Lewis’ mother, Deborah Tatum, was also an honoree for her life of active participation in community issues begun when she was a member of the 1967 NAACP Youth Council.

The Black Excellence Awards, the more formal evening event held at the Italian Community Center, honored 39 people this year, adding to the more than 900 individuals honored in the previous 31 years. This year’s honorees represented 16 areas of achievement, including business, education, law, health, media, social services, sports and religion. The mayor, county executive, lieutenant governor, and superintendent of Milwaukee Public Schools each offered their welcome and congratulations, but the honorees were the stars of the evening.

Most had experienced twists and turns in their career paths. Lynda J. Jackson Conyers, publisher of the Milwaukee Times, which supports this awards program, said the “program has been fascinated with the desire to comprehend what compels African-Americans, who have been faced with extreme social injustice, unfairness and abuse, to rise above these conditions and succeed beyond anyone’s expectations.”

Fred Reed, my friend for 50 years, honored for extraordinary achievement, serves as an example. Fired from a welding job after participating in the open housing marches, he went on to sales positions and then, after earning college degrees, worked for the Wisconsin Department of Health and Human Services and the Department of Financial Institutions.

I happened to be seated at a table where I knew no one. To start a conversation, I asked the person sitting next to me if she came because she knew one of the honorees. “Oh, no,” she said. “I came because my friend offered me a free ticket.” Though not personally connected with anyone receiving an award, she was among those applauding most vigorously, especially for the high school seniors awarded Louvenia Johnson Scholarships.

Concerned as it is with recognizing the full range of talent and achievement, the Black Excellence Awards program encourages the development of new talent with these scholarship awards. As each student was called forward to receive the award, the student’s grade point average and college plans were projected for all to see. Distinctive accomplishments — ranking first in the high school class, for example — and far-reaching career goals like biomedical research received particularly enthusiastic cheering. The person seated next to me vigorously applauded a student whose goal was to be a doctor and one who wanted to be engineer. “You go, girl!” she exclaimed.

Her enthusiasm convinced me of what I had first thought during the afternoon program. Applause not only honors the applauded, but it also rewards the applauder. It creates one audience from a gathering of separate individuals. Our applause also identifies us with what and with whom we applaud, no matter the different reasons that brought us to the same time and place. It is a way of building community, of creating an environment in which we all can thrive. We applaud, therefore we exist.