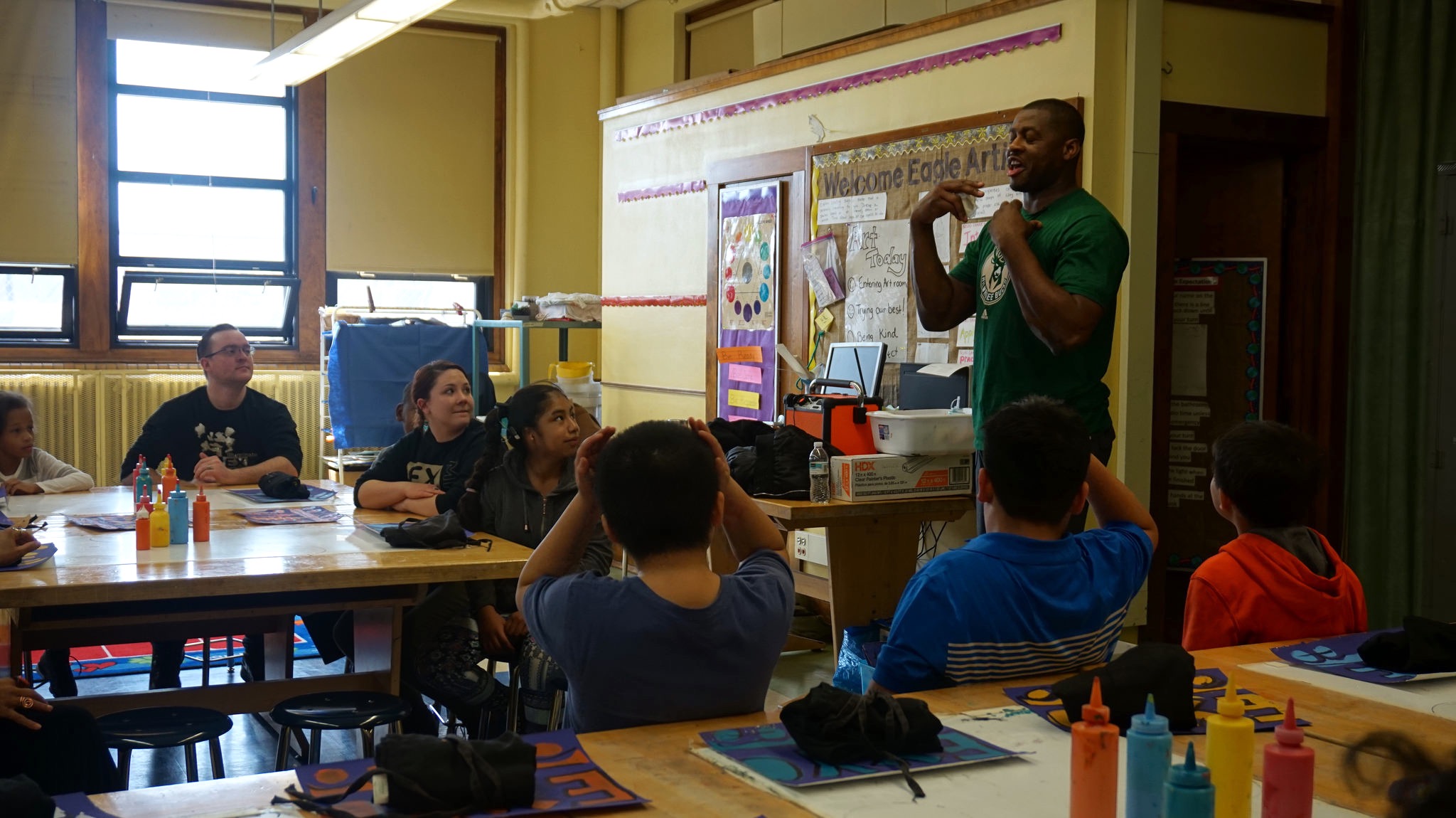 When Desmond Mason played for Oklahoma State University-Stillwater, his father told him to keep a 3.0 grade point average or he would be grounded.

“We had to get all As and Bs on our report card, a 3.0,” said the former Milwaukee Bucks player, referring to high school. “If we didn’t, we would be grounded for nine weeks, or until the next report card came out.

“One day, I heard a knock on my door and when I answered it was my dad,” he said. “He told me that he had seen my grades and he was taking my car. I watched from the window as he hitched my car up on a trailer and drove it away.”

Mason recently recounted the incident to a group of fourth graders working with Express Yourself Milwaukee at Neeskara Elementary School, 1601 N. Hawley Road. Students gasped when Mason told them that his father took away the car, a 1972 Nova that Mason bought his sophomore year of college, but they understood the lesson that performing well in school is important.

Mason has been working with ExYo since January to help create props for the organization’s 15th annual performance on May 4.

“I was involved with art organizations during my basketball career and I was on board after 10 minutes of hearing about them,” Mason said. “It’s few and far between that organizations like this exist in this country and kids get this type of positive reinforcement in life and the opportunity to express themselves, no pun intended.” 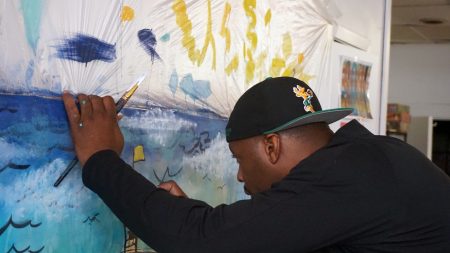 Mason has been working with Express Yourself Milwaukee since January through the Milwaukee Bucks Legends program. (Photo by Camille Paul)

Lovie Clayton, a student in Elizabeth Shoone’s class, said she appreciated the visit. “I feel grateful that [Mason] thought [enough] of us young people to come to our school and work with us through art,” she said. “I didn’t know a famous basketball player could like art so much.”

Before Mason began his career as a professional basketball player, he had an interest in art as a boy growing up in Waxahachie, Texas.

“I love being creative,” he said. “I started doing ceramics when I was 11, but I couldn’t take my art classes and draw and paint where I lived because there really wasn’t a place to do it, so I had to travel to the other side of town.”

Mason works with students at the ExYo studio and visits community centers, such as SaintA, to work on props and influence young people. He tells students his life story to help them open up to him and participate in activities.

While growing up, Mason’s father went to prison for selling drugs and his mother became addicted to crack, leaving him to raise his brothers and sisters.

“A lot of kids don’t know my story and it isn’t a good one. It’s a story of a lot of violence, guns, drugs, parents doing and selling drugs and prison,” he said. “So, when I tell that story I see a lot of them go, ‘Really? My uncle like that, my daddy like that, my momma do drugs.’ It’s all of these things that drops their guard and allows you to get through to them.”

Anwar-Floyd Pruitt, a local artist, has worked with youths at ExYo for the past five years.

“Working here has opened my eyes to some of the realities of Milwaukee that are easy to overlook,” said Pruitt. “Working with the kids has put a human face to those statistics and affected my ability to…help individuals make change for themselves.”

Pruitt added that he has enjoyed having Mason around to help encourage students. “Desmond’s story has similarities to the stories that some of our youth face and he is able to make a connection with them that way,” he said. “He’s fun. If he wanted a job, we would hire him.”

ExYo has worked with other high-profile people, such as award-winning poet Jimmy Santiago Baca and Stomp, a percussion group that uses the body and ordinary objects to create a physical theater performance.

“I’m hoping to continue to have the opportunity work with Desmond again,” said Lori Vance, founder and executive director of Express Yourself Milwaukee. “When you bring in someone that is recognized or a star, it helps light up the star in each of us and inspire us to reach higher.”

Vance found Mason’s story to be inspiring to youth and saw the surprise on students’ faces when they heard what he and other celebrities had been through.

“These people are amazing and have been widely recognized and yet they are also people who struggle,” said Vance. “I think it’s inspiring and it makes us believe that we can be more than we actually think.”

Mason said he wants to continue to work with ExYo and similar organizations through Milwaukee Bucks Legends, a program that connects alumni players as ambassadors to nonprofit organizations in Milwaukee.

“This is not a one-year thing for me with the Bucks,” said Mason. “We are already talking about doing things in the 2017-2018 season.”