You are here: Home / Home / Carousel / Millennials meet to discuss vision for Near West Side
Share this... 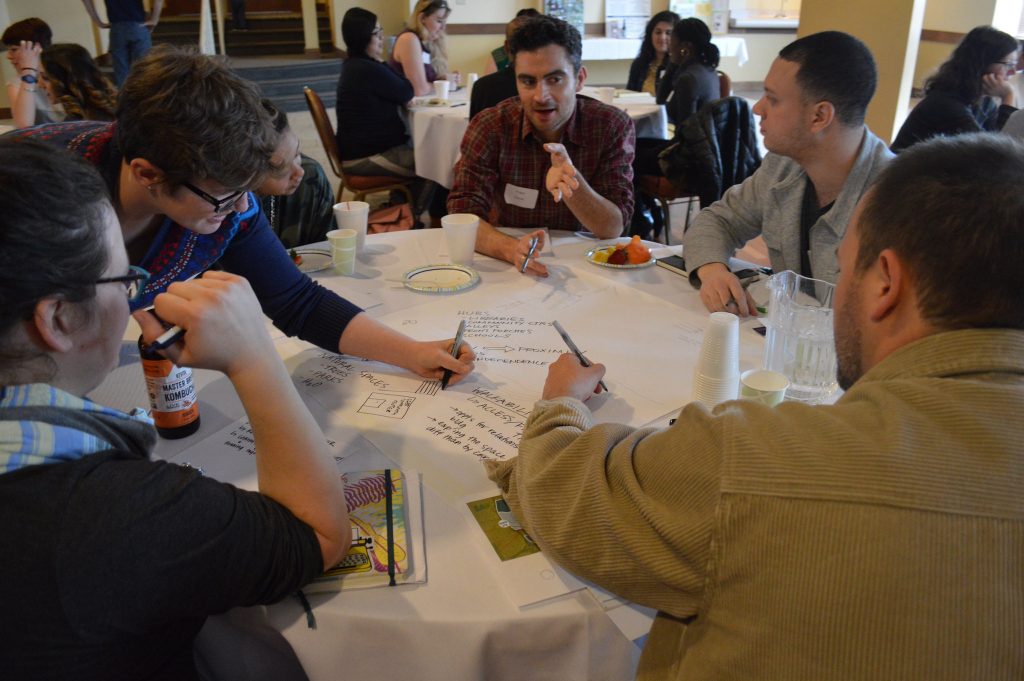 Near West Side residents brainstorm the assets and concerns about the area. (Photo by Alexandria Bursiek)

Millennials who attended a recent brainstorming session about the Near West Side said that they want improvements to be implemented in the area, but emphasized the need to avoid pricing out current residents.

“I do see a lot of change happening,” said Cold Spring Park resident Tiffany Miller, 37. “I want to make sure people of color are included in that process and remain in the neighborhood.”

Miller, who is African-American, said she attended the event because she wanted to know what the vision is for her neighborhood and to help shape it.

Area homeowners and renters between the ages of 17 and 45 were invited to discuss the future of seven neighborhoods on the Near West Side: Avenues West, Cold Spring Park, Concordia, Martin Drive, Merrill Park, Miller Valley and Piggsville. About 30 people who live or work in the neighborhoods attended.

The discussion was moderated by Christine Hill, executive director of Marquette University’s Future Milwaukee program, and the only baby boomer allowed at the event.

Among the major assets participants identified were the diversity of the neighborhoods, natural spaces and parks, local businesses and the historic buildings. MillerCoors, Harley Davidson, Aurora Health Care, Marquette University and the Potawatomi Business Development Corp. are all located in the area. 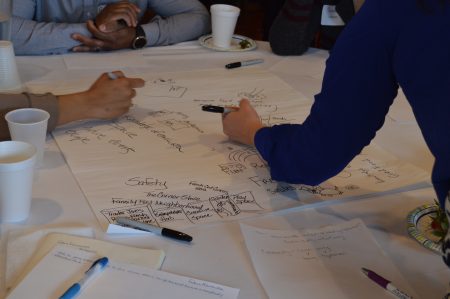 Participants write down and illustrate their ideas for the Near West Side. (Photo by Alexandria Bursiek)

“I have always thought, ‘Wow this place is so diverse. Why don’t more people know about it and how can we do better?’” said Martin Drive resident LaToya Dennis. “I am here to do better.”

Jordan Donald, 28, said that although he does not live on the Near West Side, he attended because he wanted to participate in the conversation about what Milwaukee could be. “It needs a lot of fresh ideas and fresh perspectives. I think a lot of the things we’ve been doing aren’t necessarily working and it’s time to think outside the box a little bit and listen to the people who are most impacted by decisions,” added Donald. “Nobody knows the community better than the community itself.”

In addition to concerns about gentrification, the attendees raised issues of crime and the perception of crime in the Near West Side neighborhoods. They also spoke about empty storefronts and vacant lots as well as the lack of a strong sense of community.

“Safety is one of my biggest concerns right now,” said Miller. “There are a lot of children in my neighborhood and it would be awesome to have ‘safe space’ weekends where the streets are blocked off so kids can really play.”

Martin Drive resident Heather Braatz shared her concern about vacant lots. “There are a lot of vacant lots and if left vacant for a long time that becomes a problem,” she said, adding that residents should take the opportunity to invest in the properties.

Participants proposed building a community center that could be used to bring together diverse members of the community and serve as a place to exchange ideas and grow relationships.

“The community center would have resources for both homeowners and renters and be inclusive of different ethnic groups and maybe have a small-business focus,” said Braatz.

The event was sponsored by the Near West Side Partners, Community Connections Small Grants Program, the Marquette University Office of Community Engagement and the Near West Side Percolator, a handful of Near West Side residents who meet to discuss local issues. The idea for the meet-up came from Concordia resident Sally Maddick, who has lived on the Near West Side for more than 30 years. Maddick organized the event along with Pat Mueller, another longtime resident of the area. However, since they are not millennials, they were not present during the discussion.

Mueller explained that the meeting focused on millennials because residents want to hear new opinions and ideas on how to improve the area. Mueller said that newer residents have been less involved.

After the discussion, participants were asked to rank their confidence in the Near West Side on a scale of one to five, with five being the most confident. According to Hill, the average ranking was four, compared to three before the event.

Maddick noted that she plans to pass on the participants’ thoughts and ideas to Near West Side Partners and the Marquette Office of Community Engagement. Maddick added that she would like to see the participants remain engaged in the community.

“It was a wonderful group of individuals that seemed to reflect the neighborhood,” said Hill. “[They are] diverse, energized and clearly interested in staying in this area and in enhancing what they see as assets.”