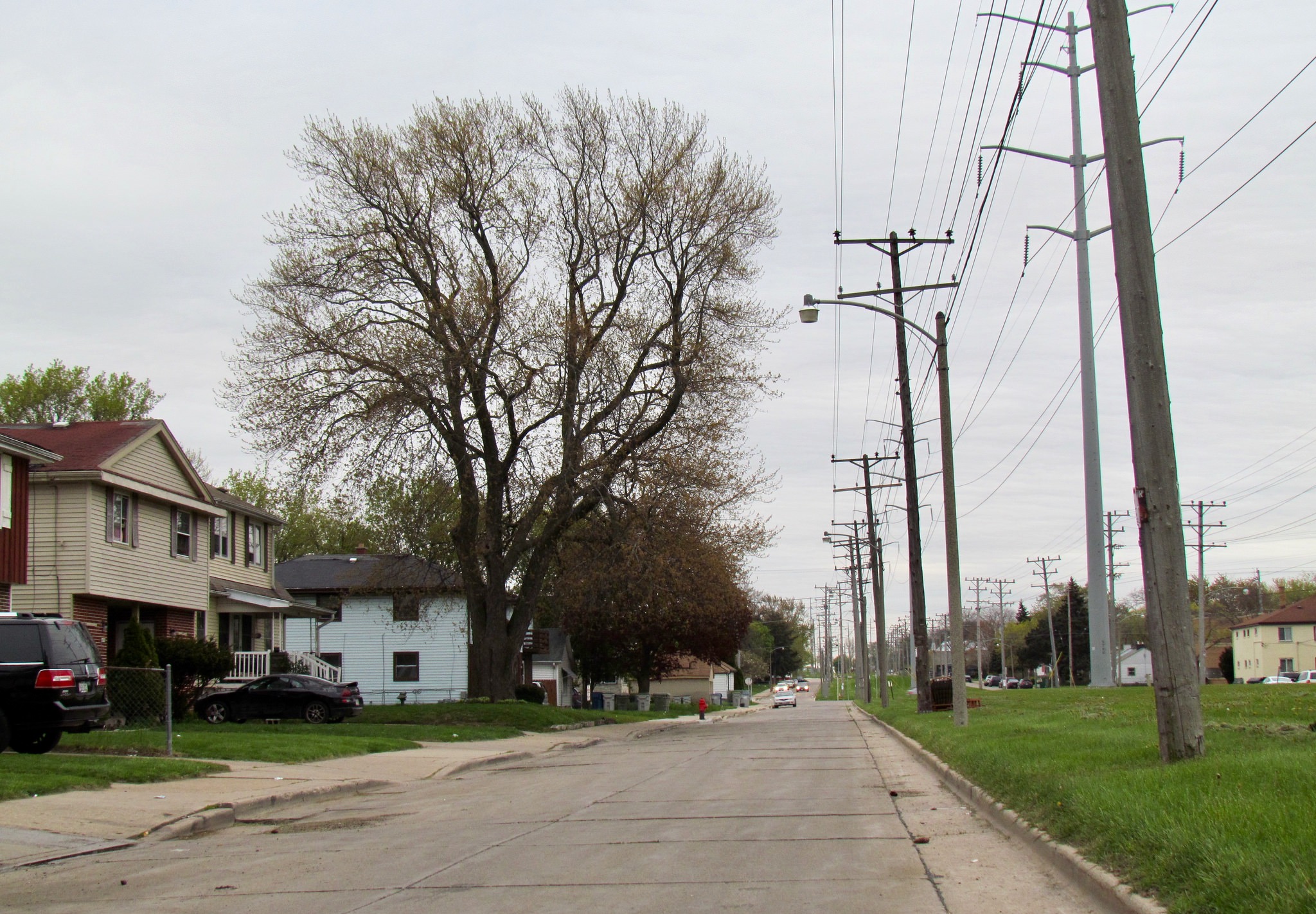 According to accounts from area residents, the confrontation between Jermaine Claybrooks and police began on North 20th Street, just north of Hampton Avenue. (Photo by Jabril Faraj)

Many questions still remain in the police killing of Jermaine Claybrooks. But, according to an investigator working with the family, it is likely Claybrooks was unconscious by the time a hail of bullets from law enforcement officers sealed his fate. Claybrooks, 32, was gunned down on the 4900 block of North 19th Place on March 16.

Milwaukee Police Department Chief Edward Flynn said the night of the shooting that Claybrooks was a subject of a High-Intensity Drug Trafficking Areas (HIDTA) investigation. When attempting to approach Claybrooks’ vehicle, Milwaukee, West Allis and Drug Enforcement Agency (DEA) officers were “confronted by an individual with a firearm in his hand.” Shots were fired and a chase ensued. After crashing his vehicle into a tree on North 19th Place, Claybrooks did not respond to orders to surrender. Flynn stated that a gun was recovered from Claybrooks’ hand at the scene.

According to an eyewitness, plainclothes officers who were on the scene then fired 15 to 20 shots into Claybrooks’ car.

Daniel Storm, a former State of Illinois employee and private investigator with more than 40 years’ experience, said Claybrooks was knocked unconscious and sustained serious injuries as a result of the crash, despite most likely having his seat belt on. After recently inspecting Claybrooks’ vehicle, Storm stated that the airbags were intact, and did not deploy. Fractures inside Claybrooks’ skull are “consistent with him striking the steering wheel,” Storm said, adding that a medical professional, also present when examining the body, pointed out the fractures. Claybrooks’ shoulder was “completely separated” and there was “a tremendous amount of (internal) bleeding,” most likely caused by the separation.

According to eyewitness testimony and a video taken at the scene of the crash, large amounts of smoke, created by the still-spinning front wheels, billowed into the car.

“I photographed his (Claybrooks’) lungs, and there are black spots consistent with him breathing in that acrid smoke,” said Storm. “The only way that you could remain inside of a car like that is if you were unconscious.” 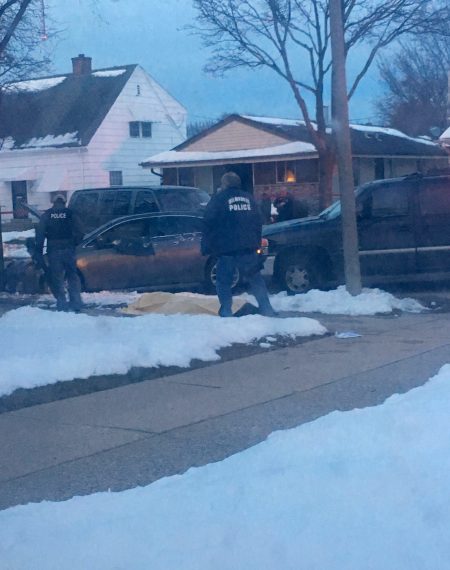 A cell phone photo taken by an area resident shows Claybrooks’ damaged car, in the immediate aftermath of the shooting.

MPD denied a request from NNS for the police report of the incident, citing that the record “is the subject of a pending criminal investigation or prosecution.” The Wauwatosa Police Department, which is heading the investigation into the police-involved shooting, did not respond to requests for comment.

In addition, Storm made a formal request on March 24 for the report from Claybrooks’ autopsy but said MPD instructed the medical examiner not to release the records. Storm, who is also working on the case of Terrill Thomas — who died in the Milwaukee County Jail of dehydration last year — said it is the only autopsy, over his long career, he has not been able to obtain.

“A lot of this doesn’t make any sense,” said Walter Stern, an attorney representing the Claybrooks family. “You have tinted windows in the car. You also have a potentially unconscious person. How in the world is that person a danger to the police?”

He added, “All the witnesses who we interviewed, including the man that took the whole video, did not see any weapon, at any time.”

According to accounts from residents of the immediate area, the confrontation began on the 4800 block of North 20th Street in front of a vacant lot on the east side of the street, which is divided by a large grassy median.

Eboni Conn, who has lived on the block for about a year, said she and her three children were watching a movie in the early evening of March 16 with the surround sound on, and that she didn’t see or hear anything. However, she said police came by later that night asking if she had heard any talking, arguing or gunshots.

Conn, who works third shift, said that for the next two or three days, she saw officers searching the area for shell casings. “It was like 5, 6, 7 o’clock in the morning and I would be coming from work … and I would just see them out there searching on the ground, looking on the ground,” she said. “There [were] just the same three [or] four police officers.”

A longtime resident who lives on the west side of 20th Street and did not want to give her name, said she heard screaming and then, after about 10 or 15 seconds, between five and six gunshots.

“I watched the whole thing when they turned the corner,” said Nate Beverly, the man who shot the video on North 19th Place. “I think he (Claybrooks) was out of it before, because you could see he was like — the car was swerving and it was slowing down, and that’s when [police] started bumping the car … You could see a little hole in the back of the window, you know, so I think he was shot before they even shot him over here.”

Others neighbors refused to talk or said they didn’t know anything.

“They’re scared,” said Storm, who has interviewed many residents but said they have been hesitant to get involved. “I saw, in that neighborhood, a real distrust and a fear for a black and white car.”

Vaun Mayes, who helped to initially identify Beverly and bring his recording to the attention of local media, said often police engage in behavior that is intimidating to witnesses while carrying out an investigation. He added that recent cases where police have killed individuals and not faced charges factor in, as well.

Mayes said, “They have legitimate fears — they have a legitimate reason to not want to get involved.”

Milwaukee Police Department officials did not immediately respond to a request for comment.

Beverly said he may be jeopardizing his well-being, but it’s more important that people know what happened. “I kind of wish I’d never seen this, because there’s just so much to this.” But he added, “It wasn’t right. You know, if the guy would’ve got to shooting, I would’ve said, ‘Hey, there’s a guy out here shooting at the police and they got him.’ But that’s not the case.”

According to Storm, the police investigation team’s report was delivered to District Attorney John Chisholm’s office last week. Chisholm’s office did not return a request for comment. Storm said he and Stern have a meeting scheduled with Chisholm soon and that they hope presenting the evidence they have collected will help him to make a timely decision on whether to bring any charges.

Regardless of the result, Stern said he just wants to get to the bottom of the situation, adding that the family has “been really hurt by this whole incident.”

“I want to find out: ‘What is the truth?’ Is there a case or is there not?” he said. “There’s a lot of questions and I want them answered.”