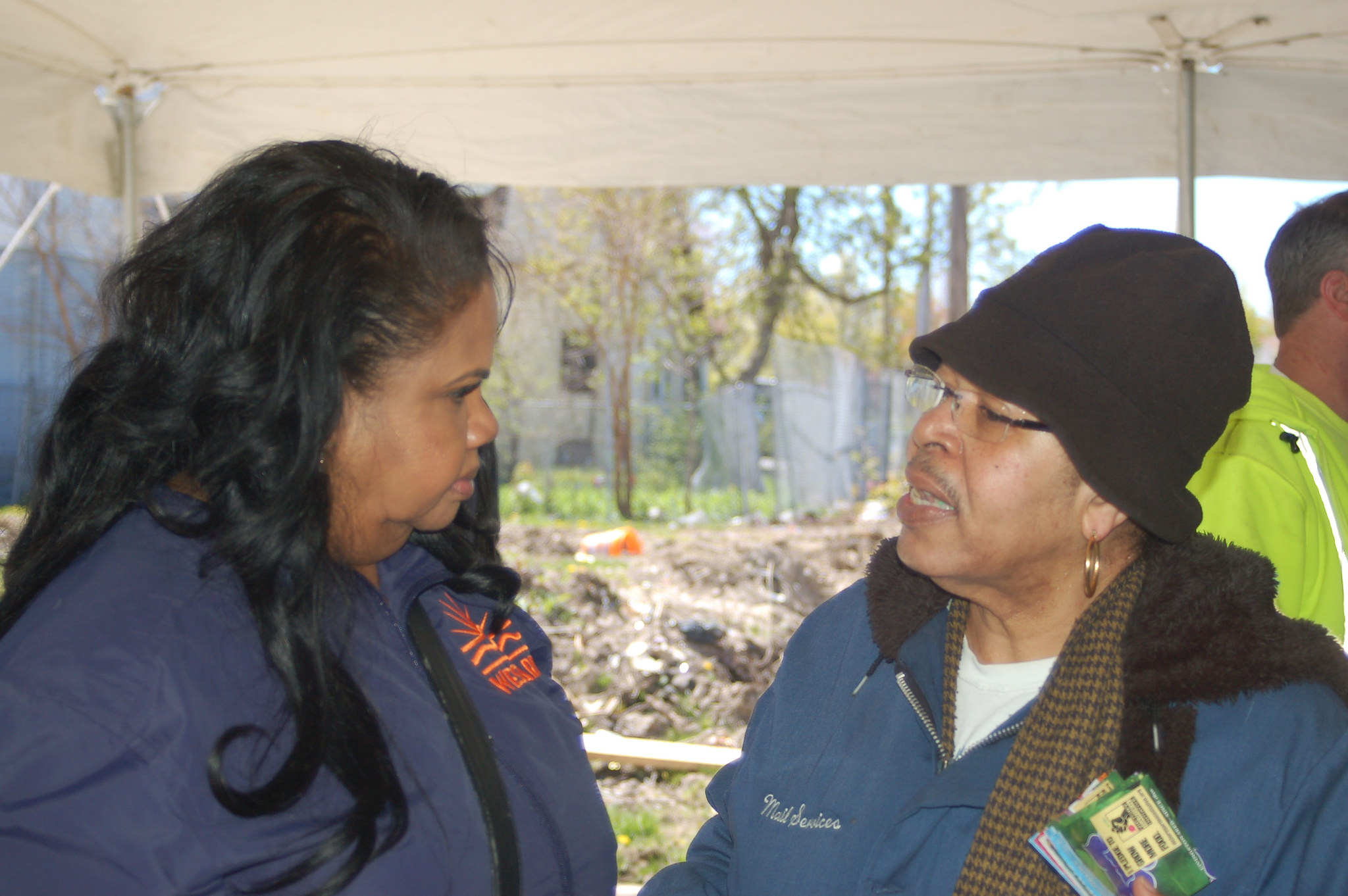 Stephanie Kendrick, 62, sported a sunny smile as she bustled around an enormous white tent on a bright spring morning in the Harambee neighborhood.

Grinning and chatting enthusiastically with neighbors, local business people and city officials, Kendrick said she is thrilled that Bader Philanthropies, Inc., is breaking ground on its new worldwide headquarters in the area she has called home for 49 years. She lives just blocks from the Bader site.

“This is a welcome change,” she said. “We need this. Thinking about it, I just get happy!”

Neighborhood residents recently gathered with city officials, including Mayor Tom Barrett and Alderwoman Milele A. Coggs, representatives of nonprofit organizations and business owners at a ceremonial groundbreaking for Bader Philanthropies at the site of its new global headquarters, 3318 N. Dr. Martin Luther King, Jr. Drive in the Harambee neighborhood.

Harambee resident Mike Hardison, 57, lives just a few doors down from the construction site and also supports the project. 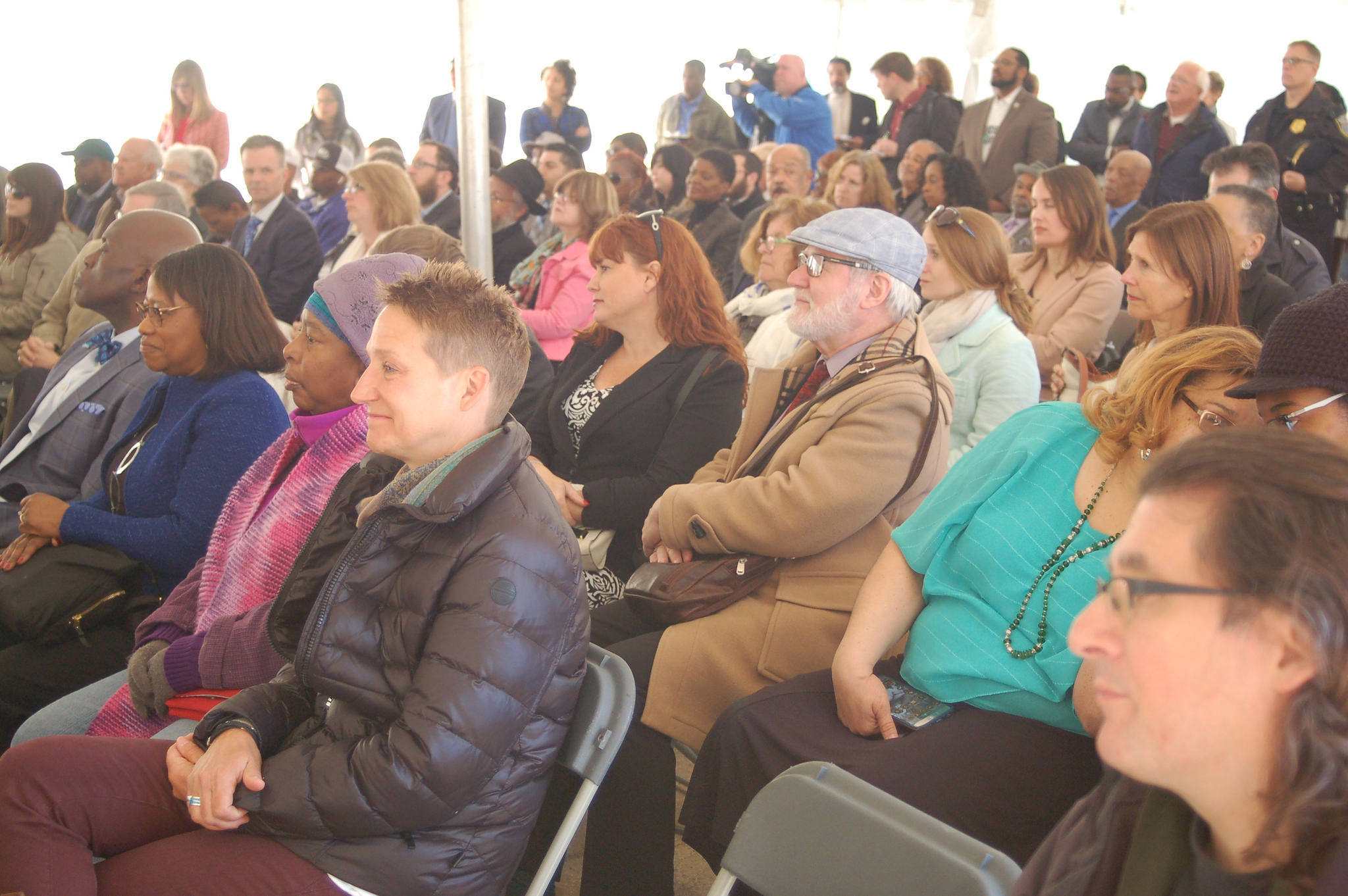 Neighborhood residents, city officials and others gathered to mark the groundbreaking for the new Bader Philanthropies headquarters. (Photo by Naomi Waxman)

“I’m interested to see what they’ve got to offer to the community,” he said. “We need this here to make [Harambee] a better and safer community.”

Hardison, who moved to the neighborhood at 11 years old, is particularly interested in employment opportunities for youth.

“We’ve got to give the kids something to do,” he added. “Bader might be a big change for the neighborhood and I’m happy they’re here.”

Bader announced its intention to relocate from Milwaukee’s Historic Third Ward to Harambee in August 2016 with the goal of developing and expanding its commitment to the neighborhood.

The renovated facility, first built in 1927, will allow the foundation to host twice the number of guests in meeting spaces and includes plans for a landscaped area and 50 parking spaces. Bader has contracted with a number of African-American-owned businesses to participate in the renovation, including JCP Construction, Spann & Associates, LLC, Spencer Renovation & Construction, Zoe Engineering, LLC and White Glove Group. Bader plans to complete the project by May 2018.

For Pamela Morgan, 63, the new Bader headquarters is literally the answer to her prayers.

“I prayed that more life would be brought to the neighborhood,” she said. “I’m so impressed at [Bader] coming in here and giving hope to a lot of hopeless people.”

Morgan recently moved into Heart & Hope Place, just down the street from the new Bader site, and has already observed how Bader’s decision has affected the area.

“Every time you see somebody pass here they smile and take pictures,” she said. “Even I take pictures! It’s like having a big birthday cake in here.”

Coggs said that until recently raising citywide interest in developing the north end of Dr. Martin Luther King Jr. Drive has been a struggle, but Bader’s decision is a harbinger of change.

“It is easy to sit in glass towers and serve the peasants,” she said, “but it is another thing entirely to put your headquarters where the community needs you.”