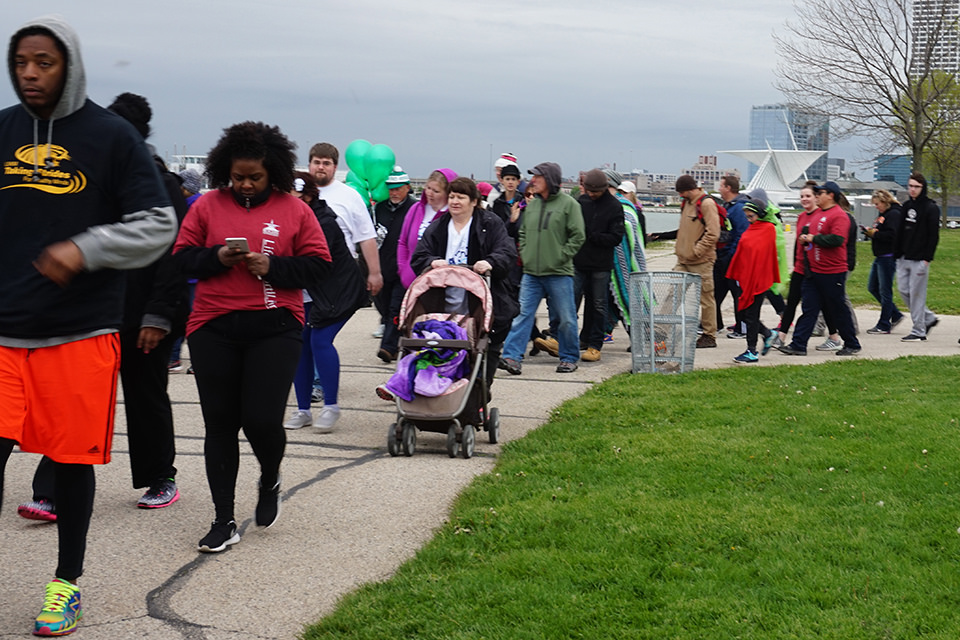 Participants in the NAMI walk begin the 5K at Veterans Park. (Photo by Hailey Richards)

A red and white tent shakes back and forth as a gust of wind hits volunteers’ backs. Glancing out at the heavy rainfall, walk manager Susan Schoenmarklin shares her personal journey as a caregiver for her son, who struggled with a mental health condition.

“I felt isolated. Really, there was little to no support. It was a ‘no casserole issue.’…No one is going to show up to your house offering a casserole when you’re really in need. That’s just the reality,” said Schoenmarklin.

On the eastern edge of Veterans Park, hundreds of participants and volunteers stand and chat, waiting for the 5K fundraiser for NAMI Greater Milwaukee to begin.

NAMI Greater Milwaukee is part of the national nonprofit organization National Alliance on Mental Illness (NAMI), which works to support, educate and improve the lives of those who live with mental illness, as well as their families and caregivers, and to reduce societal stigma.

To provide free services such as peer support groups and 12-week classes, NAMI relies on help from sponsors and fundraising events. NAMI Greater Milwaukee enlisted Schoenmarklin, once a board member, to take charge of the 15th annual NAMIWalks 5K, which raises funds for the organization.

Schoenmarklin said she felt people were judging her as her son struggled with severe depression at a young age.

“He was 5 years old when he was diagnosed, and I didn’t know what to do or how to help him. I felt like a failure as a parent,” said Schoenmarklin. 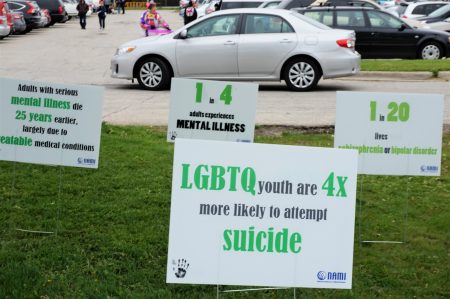 Another gust of wind rolls off Lake Michigan, as heavy rain pours down on the walkers. Zipping up her pink jacket, Schoenmarklin adjusts her cold-weather headband.

Schoenmarklin said she was working at Children’s Hospital of Wisconsin when someone told her about NAMI. “I looked into it and decided to take a 12-week course intended to educate caregivers about mental illnesses. It was such a phenomenal resource. I decided to volunteer and teach the class. Ever since then my heart has been in it for NAMI,” she said.

While the bad weather decreased attendance, Schoenmarklin is one of 2,000 people who registered for the Milwaukee NAMIWalks. NAMIWalks, which take place in 80 cities throughout the country, is the largest and most successful mental health fundraising event in the country, according to the NAMI website.

Participants pass signs stating “One in four adults experiences mental illness” and “One in 20 lives with schizophrenia or bipolar disorder.”

“A lot of people here are walking for those in need, those they love, and those they lost to suicide,” said NAMI Executive Director Peter Hoeffel, speaking to the crowd congregating at the gazebo before the walk began.

“They are our mothers, fathers, sisters, brothers and our soldiers,” said Hoeffel.

For 22-year-old walk participant Amanda Smith, NAMI offers more than support. The organization has encouraged her to be open about her mental health.

“I heard about NAMI when I was volunteering for a suicide walk,” said Smith, surrounded by a group of women wearing neon green shirts with the words “Manda’s Pandas.”

Sitting in a wheelchair with her legs in two boots, Smith said she brought her support group and caregivers to her first NAMI walk.

“These are the people who have supported me and help me take care of myself. In the beginning of my mental wellness journey I felt that I couldn’t be open. I wish I had known about the resources available to me,” said Smith.

“It takes months and months to get doctors to understand and listen to you. It’s even worse when you don’t know where to go or who to turn to. I felt like no one wanted to listen to me and what I was going through,” Smith added.

“The black community …has made mental illness either a butt of a joke or something you can pray away: nothing you can really openly discuss,” he said. “And as a man, if you are showing any kind of emotion it’s automatically considered weak. No wonder people don’t want to share; they’re too afraid of what society will say.”

NAMI helps people living with mental illness to create a wellness recovery action plan, and operates a crisis intervention team. The group also visits high schools to perform a play, “Pieces, In My Own Voices,” to humanize those with mental illnesses.

“While it is better now than when I was a kid, we are still not where we need to be,” said Smith. “I work hard every day to live a normal life.” She volunteers with high school peer groups to offer support.

Schoenmarklin, whose son is now a junior in college, added, “My story had a happy ending, but so many don’t, especially because society refuses to talk about it and quite frankly we are all hiding.”

An hour earlier at the start of the 5K, Hoeffel stood on a 3-foot platform and stated, “My name is Peter Hoeffel. I’m the executive director at NAMI Greater Milwaukee. I suffer from an anxiety disorder and diabetes, and I should be able to talk about that in the same sentence.”