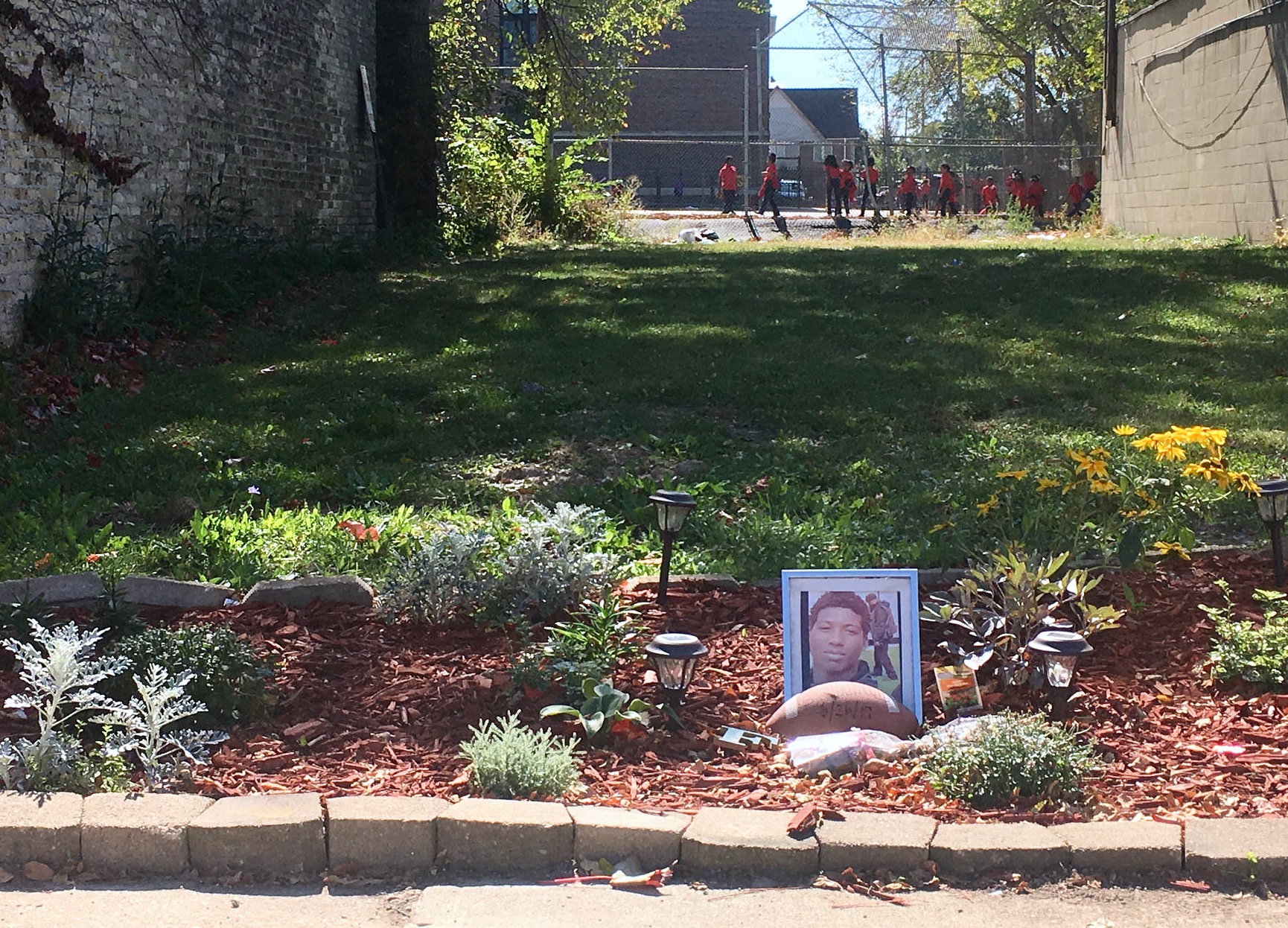 Behind the garden honoring Emani Robinson near 39th and Center streets, students at Milwaukee College Prep play in the school parking lot. (Photo by Elizabeth Baker)

In a small lot next to a convenience store on the corner of 39th and Center streets lies a bed of tiny bushes, purple and yellow flowers and four lanterns, all surrounding a photo of Emani Robinson, a 16-year-old boy shot and killed on that corner this summer.

The little garden sprouts life in a place that holds the memory of cruelty, violence and death for so many in the neighborhood. Since Robinson’s murder, family, friends and neighbors have gathered near the corner to honor and remember him.

For a while, a photo and decorations hung on the stoplight as a tribute to Robinson, but Quick Food Market manager Greg Powell said the “morbid, melancholy” reminder of the death caused fear and discomfort among customers.

Camille Mays, founder and coordinator of Peace Garden Project MKE, said she worked with Robinson’s family to move the memorial from the roadside to what was then a vacant lot next to the store and plant a garden. The Peace Garden Project MKE is dedicated to “changing the landscape of our communities by adding art, landscaping, and replacing makeshift memorials throughout our city,” according to its Facebook page.

Unlike memorials with teddy bears and paper decorations, which essentially become litter, the garden is a permanent and beautiful fixture in the community, Powell said. “We definitely got a little bit of our traffic back, and customers are more comfortable.”

The move from the public sidewalk to a designated area where a crowd can gather solved a problem that a proposed policy change aims to prevent. 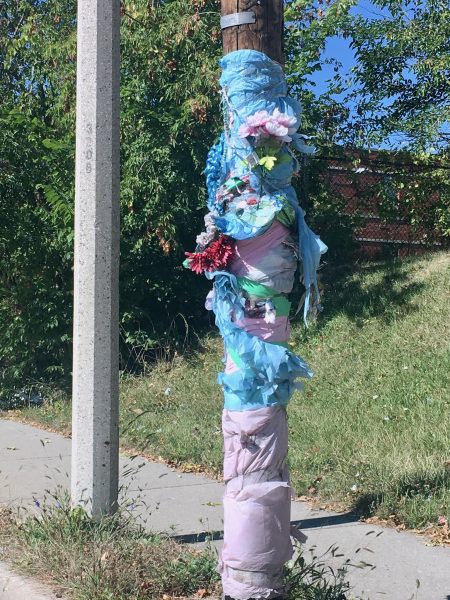 A memorial on a utility pole near 32nd and Burleigh streets. (Photo by Elizabeth Baker)

At a City Public Works Committee meeting last month, Ald. Cavalier Johnson put forth a policy that would limit roadside memorials to stand no longer than 10 consecutive days and would allow people to visit only between 7 a.m. and 7 p.m. Currently these memorials can remain for 30 days.

Roadside memorials are shrines along streets and sidewalks honoring someone who has died with photos, balloons, teddy bears, flowers and other decorations. They are common in central city neighborhoods, and many of the lost loved ones are victims of gun violence or car accidents. These memorials often serve as gathering spaces for people to mourn the loss.

Johnson’s proposal was in response to complaints from citizens in his district who pleaded with him to remove a memorial on their street.

“Some of these memorials turn into, essentially, unpermitted block parties,” Johnson said.

Where people gathered at the memorial, they left behind muddy lawns, garbage, empty beer bottles and blunt wrappers. They parked their cars on neighbors’ private lots, hung out near the memorial late into the night and even grilled out in the street, Johnson said.

“The first young lady I spoke to had an infant child,” he said. “It’s hard enough to get some sleep at night because the baby keeps her awake, but now the baby can’t even sleep because folks are there at all hours of the morning.”

Johnson added, “We respect, of course, people’s wishes to go and mourn the people who have been lost, but we also have to respect the people in the neighborhoods.” He said the updated policy would give people a chance to reclaim their neighborhood after the incident.

Local activist Dennis Walton, outreach coordinator of the Milwaukee Fatherhood Initiative, said he understands both sides of the issue, but he thinks Johnson’s proposed legislation would fail to address the root problem.

“Telling someone that they can’t grieve after 8 o’clock at night is not going to solve the real problem,” Walton said. “Band-Aid policies like this aren’t going to do anything; it’s just going to cause more division among people.”

He said that especially with a complex issue such as gun violence, local elected officials should mediate between the parties and develop empathetic, proactive strategies to meet their needs.

Johnson’s proposed policy update also mandates that the city’s Office of Violence Prevention approach the family of the deceased when a street memorial is erected and inform them of the time limit.

Mays said she thinks the updated policy would be a compromise that takes into account both sides of the issue.

“This becomes really sensitive for certain families, and it can be part of their grieving process,” Mays said. “But you have to set a boundary in respect of the neighbors.”

Mays and other volunteers landscape projects such as the Robinson garden to make neighborhoods look nicer and honor someone who has died.

“The gardens are more of a representation of what we really mean with those (roadside) memorials. They should call her (Mays) over every time they take another memorial down,” Powell said. “The garden brings happier feelings to the area in these trying days.”

Johnson represents the 2nd District — bordered mainly by Mill Road on the north, Appleton Avenue on the west, Capitol Drive on the south and 60th Street on the east. When he first proposed the policy change, some aldermen opposed it because it would force removal of peaceful, long-standing memorials.

The proposal was amended to allow individual aldermen to override the policy and allow a memorial to stand longer. Aldermen Mark Borkowski, Robert Bauman, Nik Kovac, Jim Bohl and Bob Donovan then recommended adoption of the ordinance. However, the city attorney’s office determined that the most appropriate approach would be to change the existing Department of Public Works policy rather than enact the proposal into law.