You are here: Home / Community Voices / Silence and inaction regarding MSDF must stop
Share this... 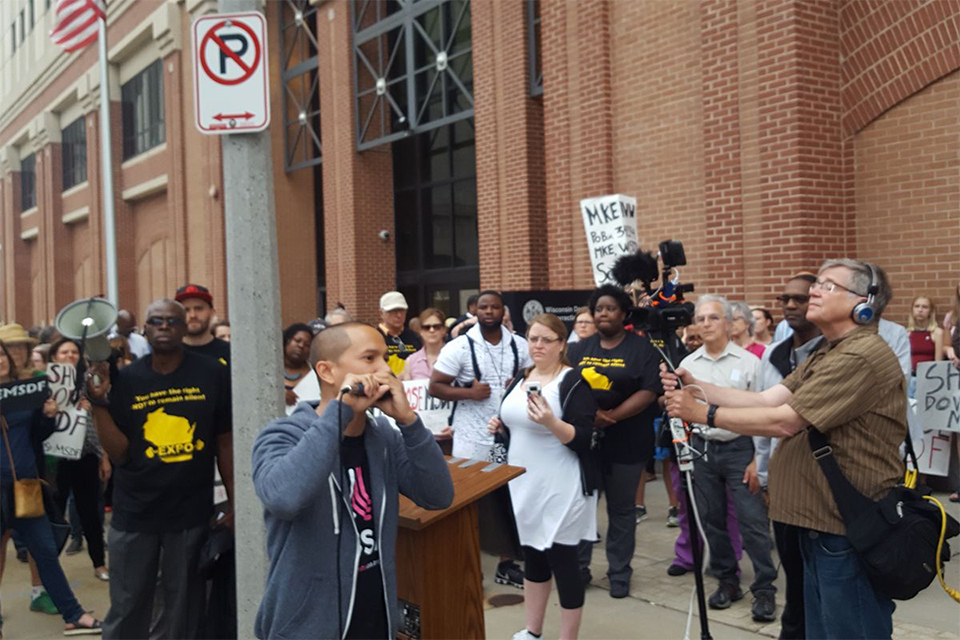 Mark Rice, a Wisconsin statewide EXPO organizer and #CLOSEmsdf Campaign lead organizer, writes that it’s time for public officials to speak out about the need to close the Milwaukee Secure Detention Facility (MSDF).

Tragically, at a time when Milwaukee and Wisconsin need bold leadership on human rights issues, nearly all public officials in Milwaukee and throughout the state have remained silent about Milwaukee’s high-rise torture chamber. This is not acceptable.

The very existence of MSDF violates Milwaukeeans’ belief in humanity and fairness. Problems facing people incarcerated at this facility include extreme heat, poor ventilation, no access to outdoor recreation or sunlight, being locked down over 20 hours a day, no in-person visits and other abuses. All of this is for people who have typically not even been charged with new crimes. These inhumane conditions and the neglect of staff members played a role in the deaths of several individuals at this institution.

The state of Wisconsin built MSDF in 2001 to house people who have allegedly violated rules of probation, parole and extended supervision. The state continues to use this facility to needlessly incarcerate thousands of people each year who have not been convicted of new crimes.

MSDF is beyond reform and must be shuttered in order to build the kind of strong neighborhoods that Milwaukee deserves. The more than $50 million that the state wastes on incarcerating people at this facility each year should be re-directed to ensure that more people have opportunities to be connected with community-based treatment programs that work, living-wage employment, stable housing and high-quality educational programs. A substantial body of research demonstrates that connecting people with these kinds of opportunities will reduce recidivism and make communities safer, stronger and healthier.

What makes the silence and inaction of public officials in Wisconsin even more disturbing is that seven states enacted policies more than five years ago that enabled them to close prisons and greatly reduce both levels of re-incarceration for revocations and rates of violent crime. You can read about this in a Council of State Governments report entitled “Reducing Recidivism: States Deliver Results.”

I learned about the atrocities that frequently occur at MSDF when the Department of Corrections forced me to spend six months there in 2007 for allegedly violating a rule of supervision that did not involve a new crime. I saw the devastating impact this institution has on people who are struggling with addiction and mental health issues. While I was there, one man attempted to commit suicide, a few men severely mutilated themselves, and several other men had to be put under suicide watch.

The very notion of locking up people struggling with parole and mental health issues is at odds with common sense approaches to justice.

Governor Scott Walker has said, “Incarcerating people for relatively low offenses is not a significant issue in the state of Wisconsin.” Actually, it is a huge problem.

It is time for Walker to face the fact that crimeless revocation — the practice of re-incarcerating people on supervision for minor rule infractions — is more than significant. It is a failed policy, a waste of money and an embarrassment to Wisconsin.

Crimeless revocations exacerbate racial inequities in Milwaukee and the cruel and unusual conditions at MSDF violate basic human rights and defy our notions of freedom and justice. A Health Impact Assessment conducted by Human Impact Partners, EXPO and WISDOM found that although only 6 percent of people in Wisconsin identify as black, 40 percent of people sent to prison for crimeless revocations in the state identify as black.

Wisconsin’s current approach to dealing with people who have allegedly violated rules of supervision is not working. No one should be forced to stay in an inhumane environment. MSDF often has a devastating impact on the health of people who are already struggling with addiction and mental health issues. Research demonstrates that relying more on community-based alternatives to incarceration like the state’s TAD (Treatment Alternatives and Diversion) Program will reduce recidivism and build communities.

Red and blue states across the nation have enacted policies that enabled them to greatly reduce levels of incarceration for minor infractions and close prisons. These states have often reinvested resources saved into programs that help to build safer, stronger and healthier communities. Wisconsin cannot afford to wait any longer to enact similar policies. It is time for Walker and Wisconsin legislators to transform the state’s unreasonable revocation process, shut down MSDF and reinvest resources in the communities that have been the most disproportionately harmed by mass incarceration.

The silence and inaction of elected officials regarding Milwaukee Secure Detention Facility is not acceptable. We must hold those who continue to ignore this human rights crisis accountable.

Visit https://closemsdf.org/ to learn about how you can get involved with the movement for change.