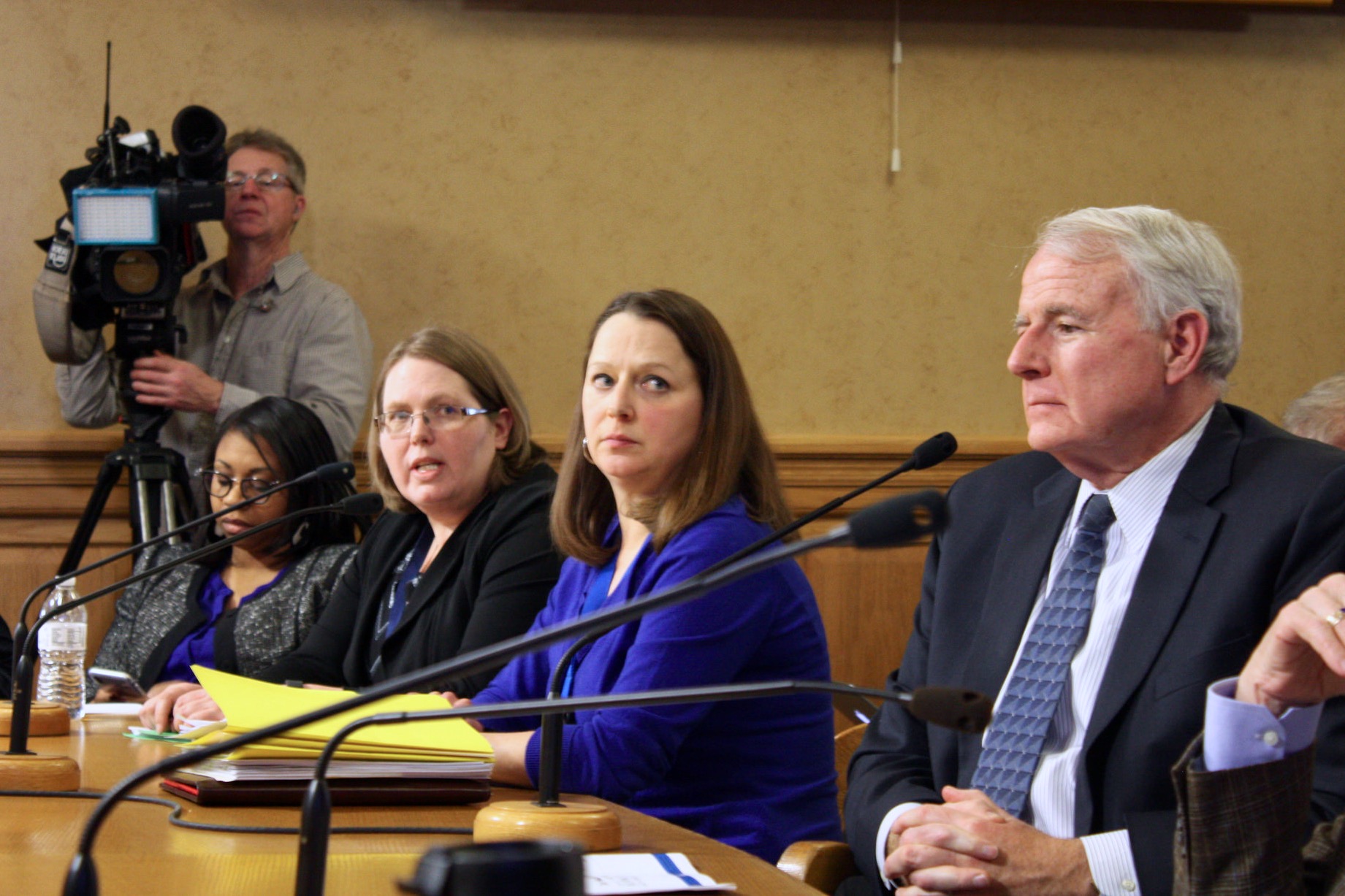 In the wake of revelations that point to mismanagement of the Milwaukee Health Department’s Childhood Lead Poisoning Prevention Program, community advocates and aldermen are asking for an independent review of the department.

Ald. Tony Zielinski, who authored a resolution passed unanimously at the end of last year calling for transparency on issues related to lead in drinking water, said he and two other alderman will sponsor legislation to have an operational audit of the Milwaukee Health Department (MHD) conducted by an independent group. Mayor Tom Barrett agreed that an audit is needed during a special hearing of the Steering and Rules Committee last week, but said he wants to see the language before committing to it.

Zielinski, who is running for mayor in 2020, said the call for an audit comes in response to “a whole series of problems,” including transparency concerns and the pace with which officials are addressing the lead poisoning crisis.

Former Health Commissioner Bevan Baker resigned on Jan. 11 after Barrett learned that MHD did not follow up with the families of at least 577 children who tested positive for lead poisoning in 2017. Barrett said he believes the total number, including the two prior years, to be more than 1,700. The gap in documentation dates back to 2015 when there was “a significant service level drop,” according to Sarah Zarate, the city’s Legislative Fiscal Manager.

The families should have received additional information on lead hazards and prevention. In addition, 281 children whose lead blood levels were high enough to warrant an in-home followup by a Public Health Services Assistant to assess lead risks in the home may not have received those visits. 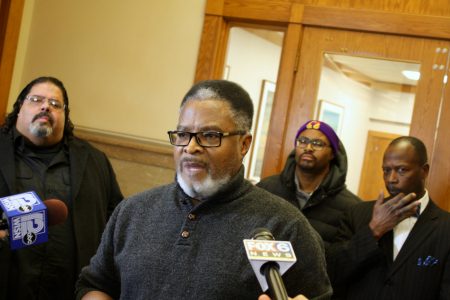 Earl Ingram, an AM Radio talk show host, speaks during a news conference at City Hall. (Photo by Jabril Faraj)

Zarate, who presented results of a preliminary investigation into the matter at the special hearing, said, since 2015, the Childhood Lead Poisoning Prevention Program (CLPPP) “had deficient documentation practices and was providing inadequate, or inconsistent, services to children with elevated blood lead levels.”

It was also recently revealed that Benjamin James, a former MHD employee, sent an email to Barrett and all 15 aldermen on Dec. 28 detailing concerns about a retaliatory work environment at MHD and “the lack of water testing at lead-poisoned children’s homes despite MHD Administration’s multiple comments of its occurrence through the summer of 2017.” MHD officials confirmed no in-home testing occurred at the homes of children whose blood tested high for lead during the summer.

Barrett testified that he notified the public less than a week after receiving confirmation about the documentation issues. However, he said lack of progress regarding abatement of lead paint hazards, the issue that initially piqued his interest, came up in a meeting with Health Department officials as early as August.

“I think what is absolutely critical is that faith in the honesty and the integrity of government be restored here,” said Ald. Bob Donovan, who ran for mayor against Barrett in 2016 and chairs the Public Safety and Health Committee. “I think we’ve got a real can of worms here, and we’ve got an obligation to … look under every rock and turn over every stone.”

Barrett addressed a number of questions about what he knew and when he knew it and defended his response to lead poisoning. “This is an issue where I feel very, very strongly that the public needs to know what I know,” he said.

MHD Director of Disease Control & Environmental Health Angela Hagy did not respond to emailed questions asking when she was informed of the documentation issues and when she informed superiors.

Marc Edwards, a Virginia Tech professor and national leader in lead-water issues, called it “shocking” and “a major breach of the public trust” for MHD to not have been testing water in lead-poisoned children’s homes. “I mean, without trust, what do you have?” he said.

And community advocates are saying the City of Milwaukee has a long history of delivering misinformation when it comes to lead in water, which casts doubt on current statements.

For example, at a Jan. 28, 2016, Steering and Rules Committee meeting, Baker said MHD has been “extremely aggressive” in abating lead paint hazards (MHD has remediated 18,000 of 130,000 homes at risk for lead paint hazards since 1997) and Department of Public Works Commissioner Ghassan Korban testified that Milwaukee’s water was “very, very safe.”

At that same meeting, former Milwaukee Water Works (MWW) Commissioner Carrie Lewis testified that partial lead line replacements disturbed the lead in the private portion of the line and caused higher levels of lead at the tap for up to a month. Nevertheless, in that year, Milwaukee partially replaced 330 lead laterals, the highest number in any one year.

According to MWW spokesperson Sandra Rusch Walton, residents “subject to partial replacements in 2016” were given pour-through (not on- or under-faucet) filters and information regarding lead hazards. Residents at the 330 homes were also asked to participate in sampling and were given information on financing options to replace the private side of the lead line (from house to curb), which according to MWW is the property of the homeowner.

“What I can tell you is that all water filters were distributed prior to lead service lines being replaced,” Rusch Walton said. She did not respond to an emailed question asking how many filters were delivered to residents.

The city suspended replacement of partial lead service lines in late 2016 under pressure from community groups, including the Freshwater for Life Action Coalition (FLAC).

MHD did not respond to emailed questions about whether it supported the partial removals, or whether it suggested that those residents be tested for lead poisoning.

In 2017, though Milwaukee remained in compliance with the federal Lead and Copper Rule, a sample taken in one of the homes contained 130 parts per billion (ppb) of lead, more than eight times the EPA limit of 15 ppb. According to the EPA and Centers for Disease Control and Prevention (CDC) there is no safe level of lead in the body.

During a news conference last week multiple individuals said Barrett should step down, calling the risk to children “a divine violation of law” and “genocide.” The percentage of children who have blood lead levels above 10 micrograms per deciliter (µg/dL) has dropped substantially, from almost 40 percent in 1997 to 3.3 percent last year. However, 11.6 percent of children still tested above 5 µg/dL — the federally recognized level for lead poisoning — last year.

“The failure to take action on this matter, and to communicate with the public about the risks and solutions is not a failure that can continue,” said Common Council President Ashanti Hamilton, noting that poor communities of color are some of the most vulnerable.

Robert Miranda, spokesperson for FLAC, called for Barrett to issue a water advisory, and for the U.S. Attorney’s Office to investigate the situation. A public information officer for the Department of Justice’s Milwaukee office said investigations are not made public until charges are brought, and declined to comment further.

“Until the citizens get together and get outraged … nothing will change,” said Kweku Akyirefi, a psychologist who has worked for Milwaukee Public Schools and the Wisconsin Department of Corrections. “You will get new leaders who will do the same thing. It’s up to the people.”

Jamaal Smith, a local activist and father added, “We’re going to continue standing here. You’re not going to be able to get away from us.”