You are here: Home / News / Arts and Recreation / AWE provides opportunity for student artists to ‘feel successful and connected’
Share this... 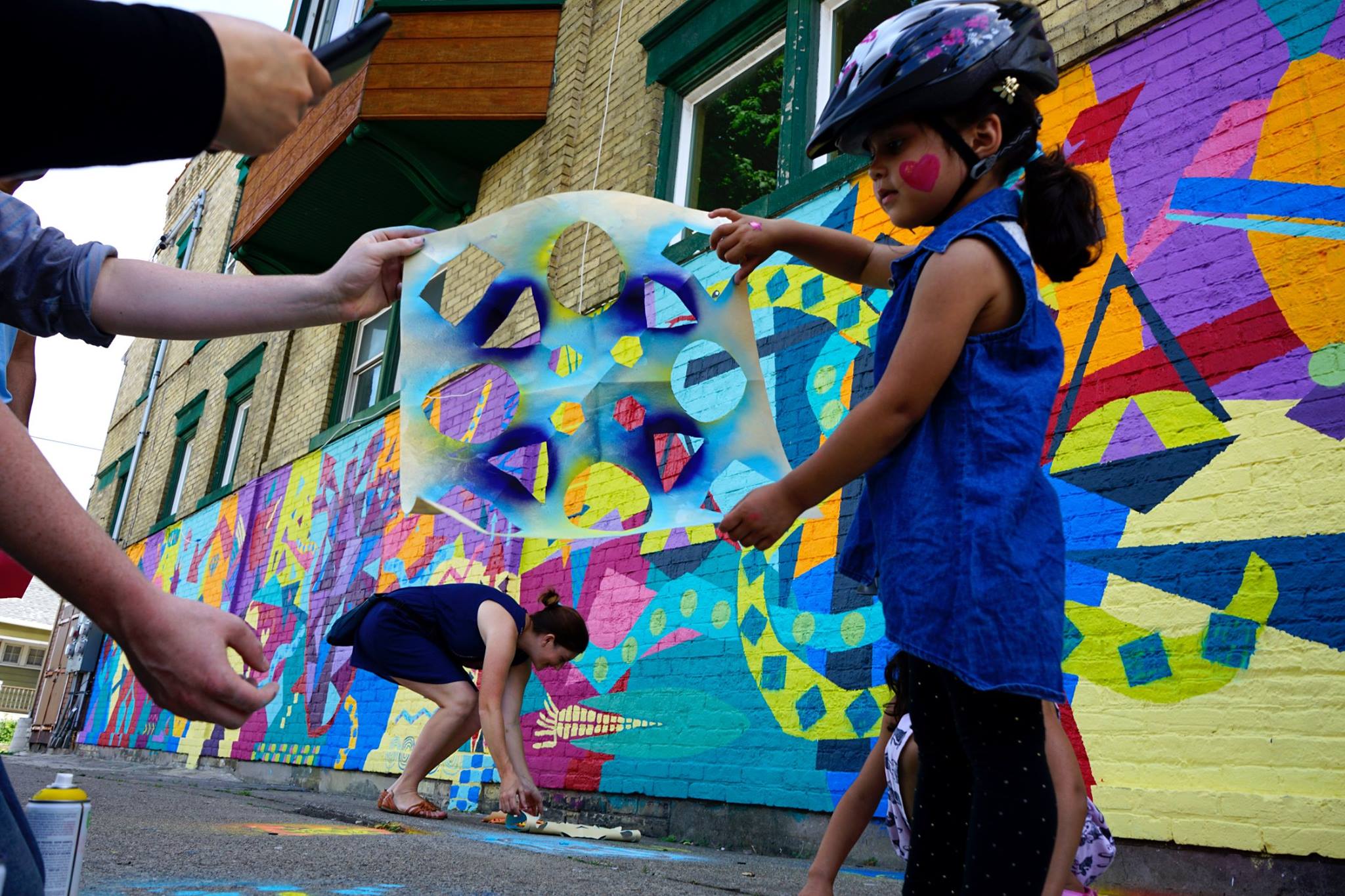 Editor’s note: This article is one of an occasional series profiling the 12 finalists for the Milwaukee Awards for Neighborhood Development Innovation (MANDIs). Artists Working in Education is a finalist for the BMO Harris Cornerstone Award, which recognizes commitment and effectiveness over time.

John Kowalczyk spread out papers on tables littered with colored pencils, glitter, sequins and other supplies. Kowalczyk, Artist-in-Residence program director at Artists Working in Education, sat down next to a teenager busy drawing a mandala.

“I absolutely love working with students and the youth. They totally inspire me and make me happy,” Kowalczyk said, as he surveyed the students working in the bottom-floor art room of Riverwest COA Youth & Family Center. “I believe in their voice and I believe in their potential and what they can do. I like being able to help them see that in themselves.”

In AWE’s Artist-in-Residence 5 x 3 program, a professional team of artists is paired with a small group of students to work on public art projects. It is named 5 x 3 because it works in five neighborhoods — Clarke Square, Silver City, Washington Park, Lindsay Heights and Harambee — and the program is in its third year.

Raina Johnson, AWE donor stewardship and storytelling manager, said the project’s goal is for young people to create something that is meaningful to them. It also gives youth opportunities to make decisions about land use, public space and neighborhoods by creating public art. The project is funded by a grant from the Greater Milwaukee Foundation. 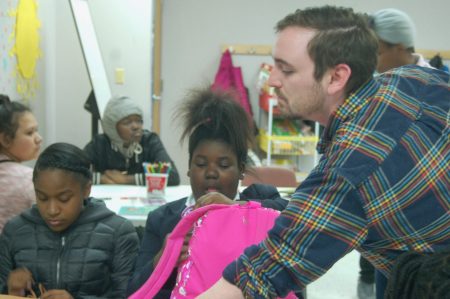 John Kowalczyk passes out art supplies for an activity. (Photo by Rachel Kubik)

Kowalczyk said that the Artist-in-Residence program offers about 15 residencies a year at schools, youth centers, parks and libraries.

One of Kowalczyk’s favorite AWE projects is the Health Equity Mural at the corner of W. Scott Street and S. Chavez Drive. “I loved the collaboration there between a doctor, a church, a youth center in the neighborhood and then (they became) a team of artists all coming together to create something great and give back to the community,” Kowalczyk said.

AWE worked with the Clarke Square Neighborhood Initiative and other partners on the Health Equity Mural. Ian Bautista, executive director of CSNI, said that creating art helps students explore a medium of communication that they might not have the opportunity to practice at home or school.

Another recent AWE project on the South Side was the creation of a mosaic along the staircase at Arlington Heights Park, at 35th and Pierce streets. The park already had been renovated with a new band shell and playground. “There was this ugly staircase kind of forgotten about in the corner of the park that was going to collect some litter, graffiti and stuff like that,” Kowalczyk said.

Johnson said AWE is celebrating its 20th anniversary this year and the organization has reached more than 60,000 youth.

“We don’t really make people come to us, we go where people are, wherever the need is, and I think that is important,” Johnson said.

Kari Hanson, turnaround arts manager at Milwaukee Public Schools, said she was involved with AWE since she was in college. When she was supervisor for the MPS Partnership for the Arts & Humanities, which supports after-school and summer programming, AWE received a grant from the partnership.

“I think our students in school don’t get enough opportunities to find their own way; it’s like there’s almost always a right or wrong answer. In the arts, they get to explore, work through challenges and figure things out for themselves,” Hanson said. “They can always be right in the arts and have an opportunity to feel successful and feel connected to one another.”

Hanson said she loves that AWE’s work is connected to neighborhood development. “I think the arts definitely also help us create an environment that is welcoming to us, stays with us and expresses who we are as a neighborhood and makes it a joyful place,” Hanson said. “There aren’t a lot of organizations doing it the same way they are.”

Kowalczyk said AWE is more than just an art education organization. “We really work on developing stewards of our city and turning youth into amazing citizens that want to share their voice, share their ideas and create change in their community,” he said.

AWE lead artist Megan Zimont was at Anna F. Doerfler Elementary School, a K-8 school located at 3014 W. Scott St., for a recent after-school program. She helped students to make drawings and watercolor design ideas for a 30- to 40-foot section of a mural for the school.

It will eventually cover most of the circumference of the building and a wall that separates the playground from the sidewalk.

Julissa Chavez, 15, an eighth grader, said she enjoys the social part of making art in the after-school program. She painted five bands of color horizontally across her paper, with a quote about money and love. “I draw (at home), and like painting and mixing colors. I (also) like to write,” she said.

Damarious Taylor, 13, an eighth grader at Doerfler, drew a mouse with red eyes and a line of blood extending down from each corner of its mouth. “I don’t really like art but I’m doing this right now and I’m kind of surprising myself. I didn’t used to draw and I can draw.”