When Angela Smith injured her back eight years ago, she discovered a new form of healing. At Milwaukee’s CORE El Centro, she participated in massage therapy, reiki and acupuncture, and to her surprise, found that her body was healing itself. She said she did not want to take traditional pain medications.

“I was amazed by the reiki,” said Smith.

Reiki is an alternative Japanese healing technique in which practitioners use their energy to restore areas of physical and emotional pain. Smith described it as “massaging someone without touching them.” As she became more passionate about reiki, she noticed that there were few people of color participating in this type of healing. This inspired her to bring it to the North Side of Milwaukee.

Smith is now the owner of The Zen Dragonfly, 302 N. 34th St., an alternative wellness business where she offers a variety of holistic classes benefiting the mind, body and spirit. She founded The Zen Dragonfly in 2011 and partnered with Walnut Way Conservation Corp., 2240 N. 17th St., in 2015.

Born in Alabama, Smith and her family moved to Milwaukee when she was a young girl. Smith said that living in a segregated city never stopped her from pursuing new experiences.

“I don’t ever want to have a fear of where I live,” said Smith. She said her parents instilled in her the drive to do whatever she wanted to do in life. “That was my thing: I can go wherever I want to go.” 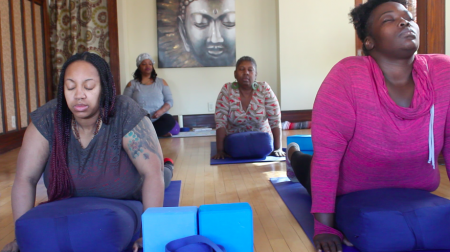 In addition to teaching classes at her home in Merrill Park, she teaches at the Walnut Way Center, and is a facilitator of Women’s Healing Circles, where women gather to learn about healing methods and for emotional support. Smith said working with Walnut Way has allowed her to do a job that she loves in multiple locations and in multiple ways.

“[Walnut Way] has been so supportive of my business and other yoga businesses too, that it’s a win all the way around,” said Smith. “It’s a flow of abundance.”

Abundance was Smith’s focus at a recent SOWFUL Sunday restorative yoga class. She asked the women in the class to focus on their own version of abundance and keep it with them as they go through their week.

Brittiny Qualls is a regular at Smith’s yoga classes.

“I had never done yoga prior to three years ago,” said Qualls. “I never thought I could do yoga; I didn’t think that people of size could do yoga.”

Qualls said she tries to attend as many classes taught by Smith as she can. “I was inspired by Angela; seeing her made me feel comfortable with her,“ said Qualls.

As a working mother, Qualls said coming to yoga allows her to be calm and get in tune with herself. “One of my favorite things after class is the ride home, because I’m so relaxed and I don’t care that people are driving crazy around me,” said Qualls.

Qualls said The Zen Dragonfly is important for the community.

“I think that if people are calm and able to understand themselves, they are better able to deal with the … stresses that are going on in the world and the community,” said Qualls.

“When you take control of your own wellness, it changes everything,” she said.

According to Smith, this type of healing is more rewarding than traditional medicine because participants do the work to heal themselves.

“We are in a society that says it’s quick to do it this way [with drugs],” said Smith. “But a pill will never heal you.”

She also offers beginner yoga classes just for men. She said it’s beautiful to watch them learn and come back.

“When they are by themselves, they are vulnerable, they are more open, they are focused on their healing, and they don’t have these distractions of women in the room,” Smith said.

Shami Lock, a Harambee resident, recently began participating at The Zen Dragonfly. She heard about yoga classes through attending Healing Circles. She said Smith’s classes are different from other yoga classes because they allow participants to “be where you are” without feeling intimidated by difficult poses.

“I feel beautiful and more connected to my body,” said Lock.

Smith said her goal is to expose people who feel stuck and lost to her methods of healing. “We live in a difficult world, but we can make it simple.”