Volunteers of all ages swooped in to rid Washington Park of fast food bags, plastic and glass bottles, candy wrappers and other trash on Saturday morning as part of the Earth Day of Service at the Urban Ecology Center Earth Day.

The event, co-hosted by the Urban Ecology Center and Sierra Club-John Muir chapter, invited volunteers to spend time inside browsing educational tables and outside cleaning up the park.

For Erick Anderson, community program coordinator at the Urban Ecology Center, the Earth Day of Service represents the beginning of the organization’s land stewardship season.

For example, the center is focusing on eliminating buckthorn (an invasive plant species originally from Europe, which releases chemicals that inhibit native plant growth) and establishing an oak woodland along the lagoon near Lloyd Street.

In addition, Anderson noted that the center will continue to focus on encouraging environmental awareness in youth.

“People are less likely to litter if they’re in a place they care about . . . especially kids,” Anderson said. 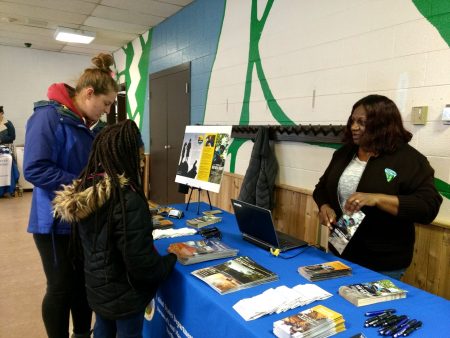 Martha Malik talks to a young volunteer and her mother at the U.S. Bureau of Land Management table. (Photo by Talis Shelbourne)

Passing down good environmental habits to the next generation is something Martha Malik, a public affairs specialist at the U.S. Bureau of Land Management, learned as a young girl.

During the summer, Malik and her sisters traveled to Tennessee to stay with their aunt in the country.

“We would pick berries, make jelly and jam and it was fun!” Malik said. “To this day, I would rather be outside pulling weeds and picking up paper than in here,” she added. Malik was staffing the bureau’s information table at the event.

Although the Bureau of Land Management mainly focuses on subsurface concerns, such as mining, in Wisconsin, it also sponsors programs such as Every Kid in a Park and National Public Lands Day to motivate land stewardship.

“We try to introduce youth and families to the outdoors and how much fun it is, whether you are fishing, looking at butterflies, bird watching or [anything],” she said.

Malik admitted that there are many challenges in the Washington Park neighborhood, and inspiring interest in environmentalism can be difficult. However, Malik said consistently reminding people about the importance of environmentalism encourages them to care.

Sierra Club member and volunteer Janet Anderson agreed, adding that service outings such as these can be a template for addressing other challenges.

“It gives a good example to encourage people in the community to work together for a common goal,” she said.

For example, Malik’s son, Harold T. Carson Jr., and her grandson, Amillion Mills, came to support her by helping clean Washington Park’s lagoon. Carson, who lives on 41st and Hampton, wants to set a good example for those in his neighborhood.

“I don’t like littering at all — that’s a pet peeve of mine for real,” Carson said. “I like to sit and walk out here and listen to my music — and I like it to be clean.”

Littering was also described as a “pet peeve” for volunteers Mary Schmidt and her daughters Jordan and Holly.

“You see [trash] go out the car door and into the street; it’s bad,” Jordan said.

The Schmidts were volunteering as part of Mount Carmel Lutheran Church’s service program; they opted to participate in the Earth Day of Service when their original project fell through.

“We don’t want the ducks to eat little pieces of plastic,” she said.

Erick Anderson is hoping that programs such as the center’s Young Scientist Club will encourage more children and parents to see the parks as a valuable resource.

“We’re an environmental center but we’re also a community center,” Anderson said. “By focusing on that positive experience, the environmentalism grows organically.”

“More than anything, we want people to make a connection with the parks and take ownership of the parks in their neighborhood,” he added.