You are here: Home / Home / Carousel / Activists honor past, imagine future at March on Milwaukee 50th finale
Share this... 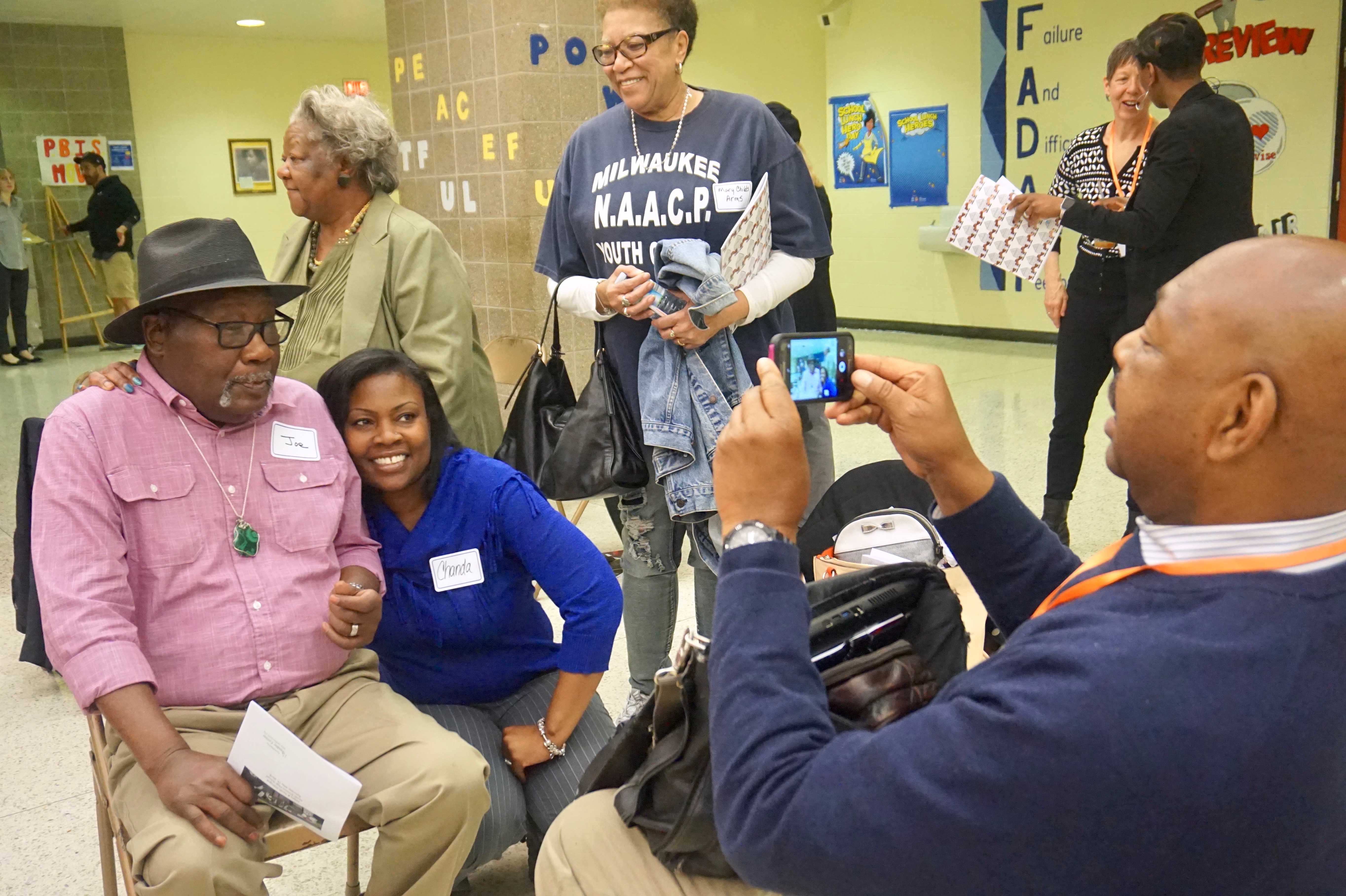 Joe McClain (left) and Chanda Wheeler pose for a snapshot after an intergenerational discussion at the March on Milwaukee 50th final celebration last weekend. (Photo by Robyn Di Giacinto)

It was a Saturday afternoon at North Division High School. In the lunchroom, the tables that usually dot the linoleum floors had been pushed aside, partially hiding the hand-painted inspirational phrases lining the beige walls and concrete columns. In their place stood 14 tight circles of metal folding chairs filled with activists, young and old.

A very different kind of learning experience was about to begin.

The attendees were gathered to participate in an intergenerational dialogue and bus tour to mark the end of a nine-month celebration of the 50th anniversary of Milwaukee’s fair housing marches.

“They marched for 200 consecutive days [in 1967 and 1968]—and when I say ‘they,’ I mean the people who are sitting in this room,” event organizer Adam Carr said to the group.

Soon after, participants settled into their conversation circles. At first, they were a bit tentative; but as time unfolded, their passion came through.

Ed Wingard, an organizer and poet affiliated with Urban Underground and Still Waters Collective, said that to have an impact, different generations of activists need to learn how to work together while also respecting each other’s differences. 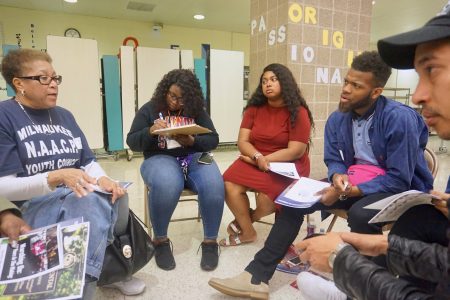 “We can’t move forward without each other,” Wingard added.

To his right, Donna Lewis, an Alverno freshman and member of the newly restarted Milwaukee NAACP Youth Council, nodded in agreement.

“We’re forgetting the value of our elders,” Lewis said. “I click on my Facebook page and I see someone disrespecting an elder and it makes me angry.”

“Is that me now? The elderly?” Arms chuckled.

“In that time, we had…to bow down a lot more to try to get a step forward,” Arms explained. “At least we saw that you don’t have to do that now.”

Before the hour was over, the group was bantering about the meaning of Childish Gambino’s new single “This is America” and bemoaning the absence of cursive instruction in today’s K-12 classrooms.

“That’s what happens when you grow up,” observed Betty Harris Martin, a former Youth Council member wearing an olive-green blouse and carrying a wooden cane. “When you come down the pipeline, what do you have to offer?”

Lewis paused thoughtfully before responding, “I think that’s what activism is. Not just holding in that knowledge, [but] using [it].”

Later, a yellow school bus gently swayed as activists loaded in for the bus tour to retrace the route of the open housing marches. A light breeze trickled in through the partly opened roof exit. The pops and crackles of opening chip bags and water bottles mixed with ‘80s chart toppers filtering through the speakers.

Projecting over the cacophony, Carr reminded participants, “I’ve asked [the younger folks] to sit with the marchers…so you can learn from them first-hand…what happened on this very route.”

As the bus motored along the streets activists walked in 1967, original marchers periodically stood up to share their stories. Pairs of activists also continued to develop the intergenerational relationships that had started earlier that morning.

“Do you feel like you guys were always enduring?” Ryeshia Farmer, 23, asked Lyneria Childs McGhee, the former Youth Council member who was sitting in front of her. “I imagine at some point you knew [that violent counter protestors] were waiting for you.”

McGhee later acknowledged, “It felt so good to have some kind of recognition after all this time.”

Soon the bus arrived at Kosciuszko Park, where 50 years ago marchers were met with a violent crowd of white rioters. McGhee noted that she had been hit with tear gas there.

Where there had once been a seething mob, now a small, smiling contingent of mostly white Milwaukeeans had gathered to surprise former marchers. They held signs hand-lettered with phrases such as “You are appreciated” and “Thank you, commandos!”

Toward the front of the bus, former Commando Fred Reed exclaimed, “This is a now-and- then moment.”

A chorus of “We Shall Overcome” began to swell up as the original Youth Council members and Commandos stared out the half-cracked bus windows.

“I thought it was amazing [to see something like this],” said Thomas Leonard, 21, the emcee of the official celebration ceremony to follow.

He noted that in the years following the open housing movement, many activists lost their jobs and garnered negative reputations because of their involvement. “[So] it’s great to finally say thank you.”

“Recognition and Re-ignition” was the theme of the celebration that followed the bus tour. Congresswoman Gwen Moore delivered the keynote address, sharing personal memories of the open housing marches and reflections on her mentor, Vel Phillips, a leader in the movement who passed away on April 17.

Other speakers included members of the NAACP Youth Council and Commandos, elected officials and other leaders of Milwaukee’s black community.