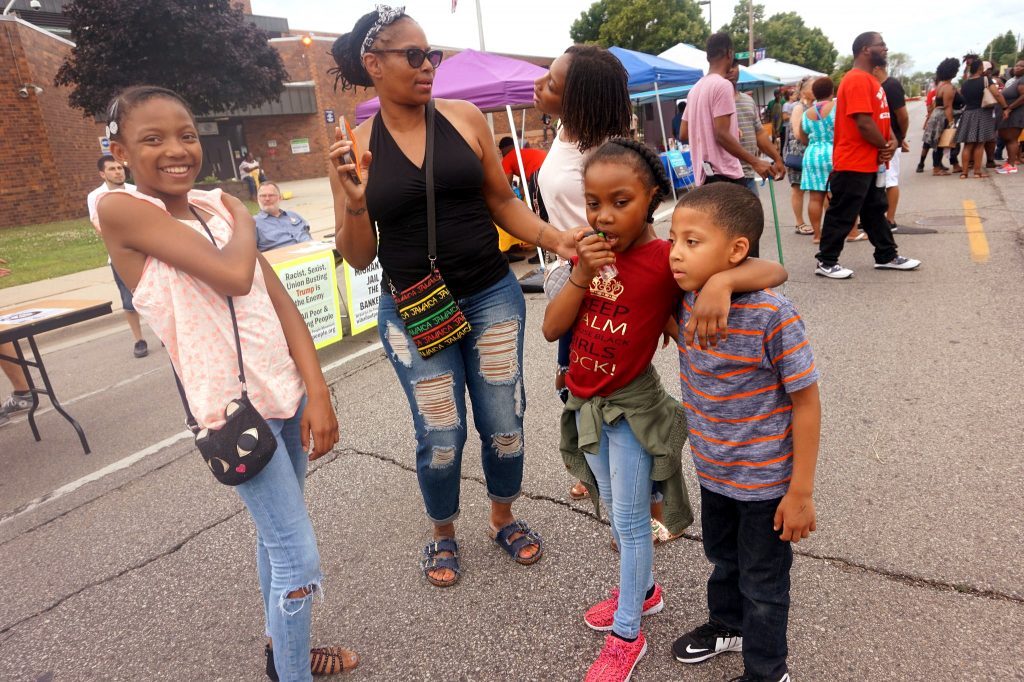 Vanessa Britton-Winston dances and chats with children at the Heal the Hood MKE block party and resource fair. (Photo by Ryeshia Farmer)

The first time Vanessa Britton-Winston attended a Heal the Hood MKE block party and resource fair, she had accidentally driven through a street barrier while heading to the grocery store. She found herself in the midst of a crowd of community members, when Ajamou Butler, founder of the event, approached her and explained its purpose. Britton-Winston parked her car and stayed until the fair ended.

Britton-Winston was one of about 450 people who attended the second of three Heal the Hood summer block parties last Saturday. She has volunteered to work at other Heal the Hood events, and was standing by in case Butler needed help.

“This event is something that I feel that Milwaukee needs,” Britton-Winston said. “We hear so much negativity, and this is just an opportunity for our people to get together and celebrate life, support one another’s businesses and show our children that we can do something with people whose only commonality with us is wanting to be together.”

Among the 25 volunteers were a half dozen of Butler’s students from Grandview High School, Milwaukee Collegiate Academy High School and Running Rebels, who helped out for the full day. Butler teaches spoken-word poetry at several schools and after-school programs.

“That to me means that it’s working, because the youth would rather be helping out at Heal The Hood than driving stolen cars [or] smoking weed,” Butler said.

The purpose of Heal The Hood MKE block parties is to share resources and promote anti-violence efforts throughout Milwaukee. Dana Smith, known as Ms. Lotus Funk on stage, said it gives “people who support non-violence a space to come together.”

Jason Ragland attended the block party, because “I figured I would make it my business to show my presence at the events of others who want to redirect the community by expressing love and hope.”

Added volunteer Atau Malik, “Six hours out of a weekend day, people are able to network, [share] fellowship and eat a meal with others in Milwaukee who have positive energy and are productive citizens.”

Butler, who coordinates Heal The Hood MKE’s operations, said that attendees could find information about housing, voting, medical or family and children’s resources at the block party.

Last year Heal the Hood hosted four block parties, with the help of an anonymous donation. A second donation from the same source helped fund three this year. The third is scheduled for Sunday, Aug. 26, and will take place on 24th and Burleigh Street. 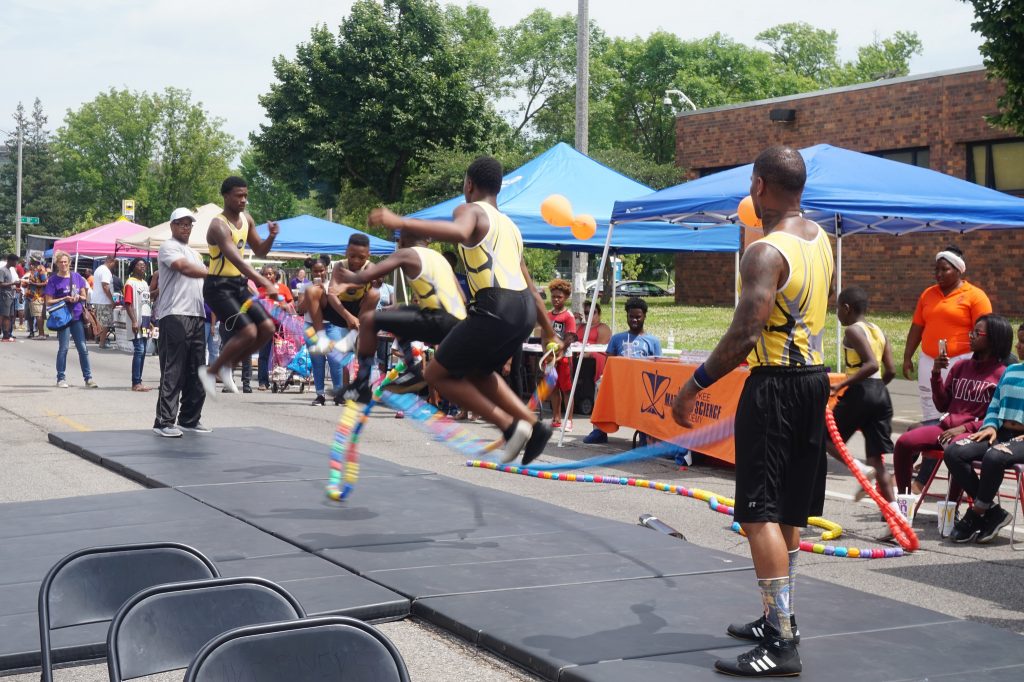 The Milwaukee Flyers stunt team performs with ropes at the Heal The Hood block party and resource fair. (Photo by Ryeshia Farmer)

“We’ve all been entertained, reconnected with loved ones and been exposed to beautiful artists and artisans that are here in the neighborhood…You’ve got your mind, body and soul being taken care of right here, today,” said Ingrid Smith, a Milwaukee native and performer.

Added Britton-Winston, “We don’t want our children to be afraid of their neighbors. We don’t want to have to go out [of the neighborhood] to have a good time and feel safe.”

Butler also teaches African drumming, self defense, team building, and audio and visual recording. He partners with Running Rebels on a program for youth re-entering the community from the Lincoln Hills School for Boys, which is slated to close and offers classes at the Next Door Foundation and City on a Hill.

Butler noted that the block parties and his work in schools complement and strengthen each other.

“The block parties are amazing, and I love this aspect of it,” Butler said, “but getting into schools and teaching anti-violence, character and leadership development, and spoken-word curricula is my favorite part.”

Editor’s note: This story has been updated to correct the date of the third Heal the Hood block party. It is on Aug. 26.