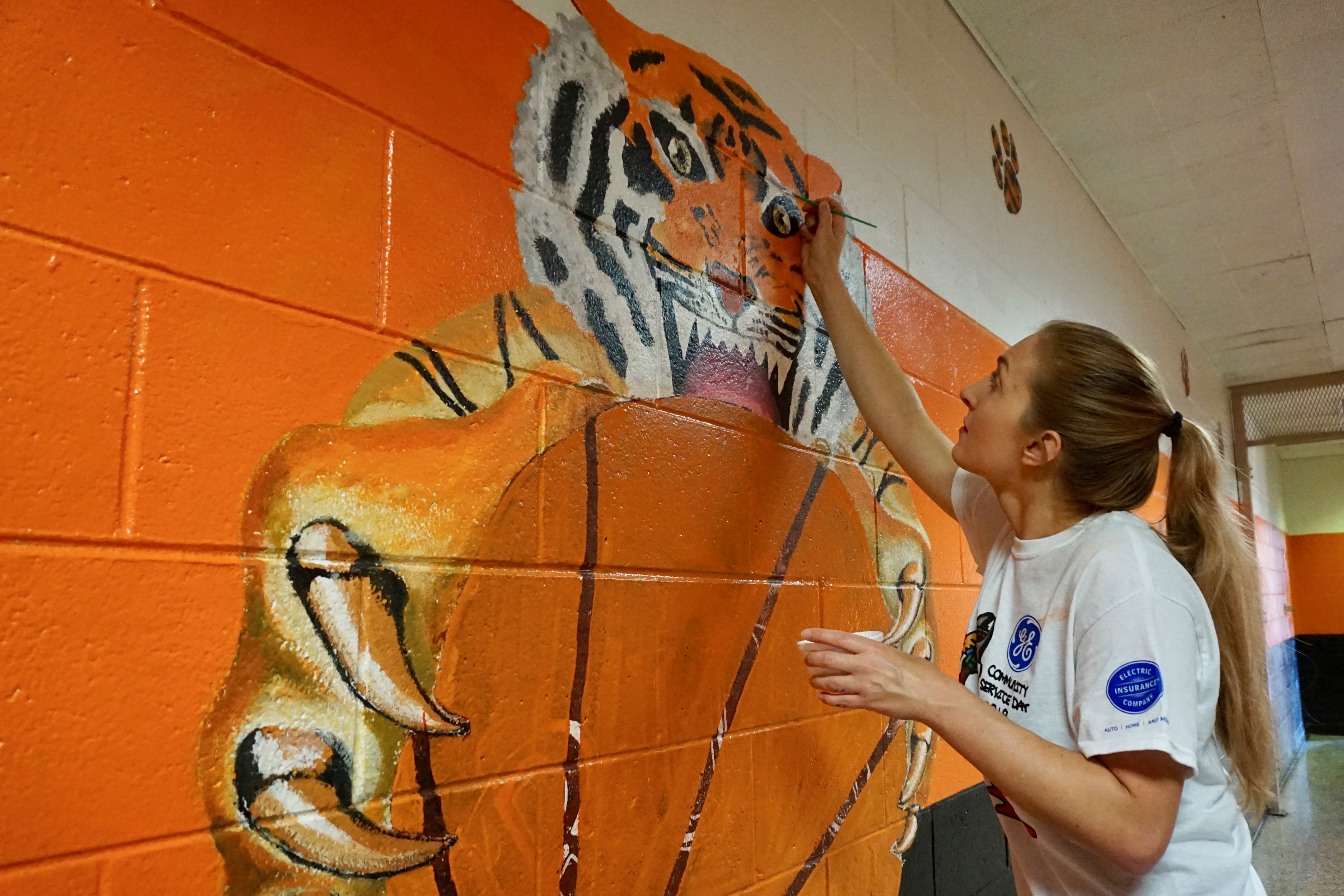 A surprise tucked away at the end of a basement hallway awaits students at Riverside University High School, 1615 E. Locust St. In a room slightly larger than a walk-in storage closet, a serene sunset mural peeks through a doorway. A small fountain bubbles in the corner. A plush couch exudes a cozy feeling. Designed as a stress-free oasis, this room is aptly named the Zen Den.

A space exclusively dedicated to emotional de-escalation has been years in the making for special education teachers Elizabeth Bart and Drew Rittgers. Before, when students caused a disruption or could not focus in the classroom, they were either sent to the office or sent to roam the halls with Bart and Rittgers. Now, with the help of donations and volunteers from General Electric (GE), students have a designated area to cool down.

“We’re so excited that we finally get to make this happen,” Bart said.

“It is a nice synchronicity that the year we decide to implement this, we get the help of GE,” Rittgers added.

Bart and Rittgers worked closely with GE volunteers to create the Zen Den. They spent months planning, and the Zen Den was finally implemented during GE’s annual community service day. GE donated a couch and a small fountain, and brought in a volunteer artist to paint a mural.

The Zen Den is targeted toward students with patterns of behavioral difficulties. The main goal of the Zen Den, according to Rittgers, is to refocus students on their classwork and increase their productivity and academic success. He said he hopes to see an increase in classroom participation and a decrease in incidents such as suspensions and office referrals during the next few years. 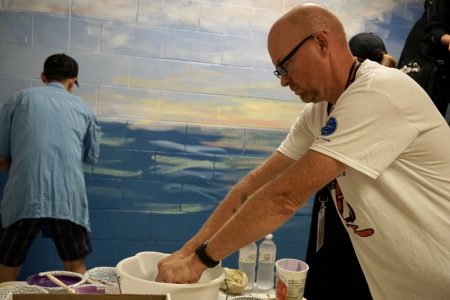 Teacher Drew Rittgers squeezes out a sponge while helping with the mural in the Zen Den. (Photo by Abby Ng)

With dimmed lights and soft music playing in the background, students can color, meditate, journal and do yoga. Schoolwork is not allowed in the Zen Den because it is meant to provide a break from academics.

One full-time teacher will work in the room to monitor students and teach them coping skills. After 20 to 30 minutes, they can return to class.

“What we don’t want to do is take them out of the classroom permanently,” Bart said. “We want them to be here. They need to know they are wanted here, and they need to be in the classroom learning, whatever that may look like.”

Teresa Buss started the concept of Zen Dens at Casimir Pulaski High School, and although the school will no longer continue its Zen Den this year, she said it made a huge difference. Students were able to build a community with a positive outlook on mental health and diversity, and she said parents told her their children would not have graduated without the Zen Den.

Buss commented that it warms her heart to see her idea spread to other schools.

“I applaud any school that is taking on this amazing concept,” Buss said. “It’s a venture worth going into and worth investing in. … I wish them all the best in creating a space that identifies that students need to deal with their mental health and emotional selves.”

Chad Miller, GE volunteer team leader, said he was excited to help make the Zen Den a reality with Bart and Rittgers.

“It gives you an appreciation for how many people are working to make this city great and keep it great,” he said.

“This is something (teachers) don’t have to do now,” said Keith Posley, interim superintendent at Milwaukee Public Schools. “Now they can focus on the true mission of what we’re here to do, and that is to educate young people.”

Displaying art not just in the Zen Den, but all around the school, Posley said, offers moments of beauty throughout the day, making students smile and uplifting their mood.

“You’re working side by side (with teachers), and making their start of the school year better,” Steffen said. “To me, that’s contagious.”

“We want to see the students succeed,” Miller added. “They’re the future, and we’re investing in them the same way Milwaukee has invested in us (GE).”

Nearly 2,000 GE employees participated in the service day at public schools across Milwaukee, Waukesha and Wauwatosa.

“We want to strengthen and preserve those communities that we live and work in,” said Holly Mancusi-Hand, Steffen’s co-leader.

Jeni Pearson, a GE employee who helped at Riverside and has been participating in the service day for eight years, said this year was especially meaningful for her because her nephew attends the school.

Students can begin enjoying the new Zen Den and other improvements when classes start on Sept. 4.

“This puts us in a great place to move forward,” Posley said.