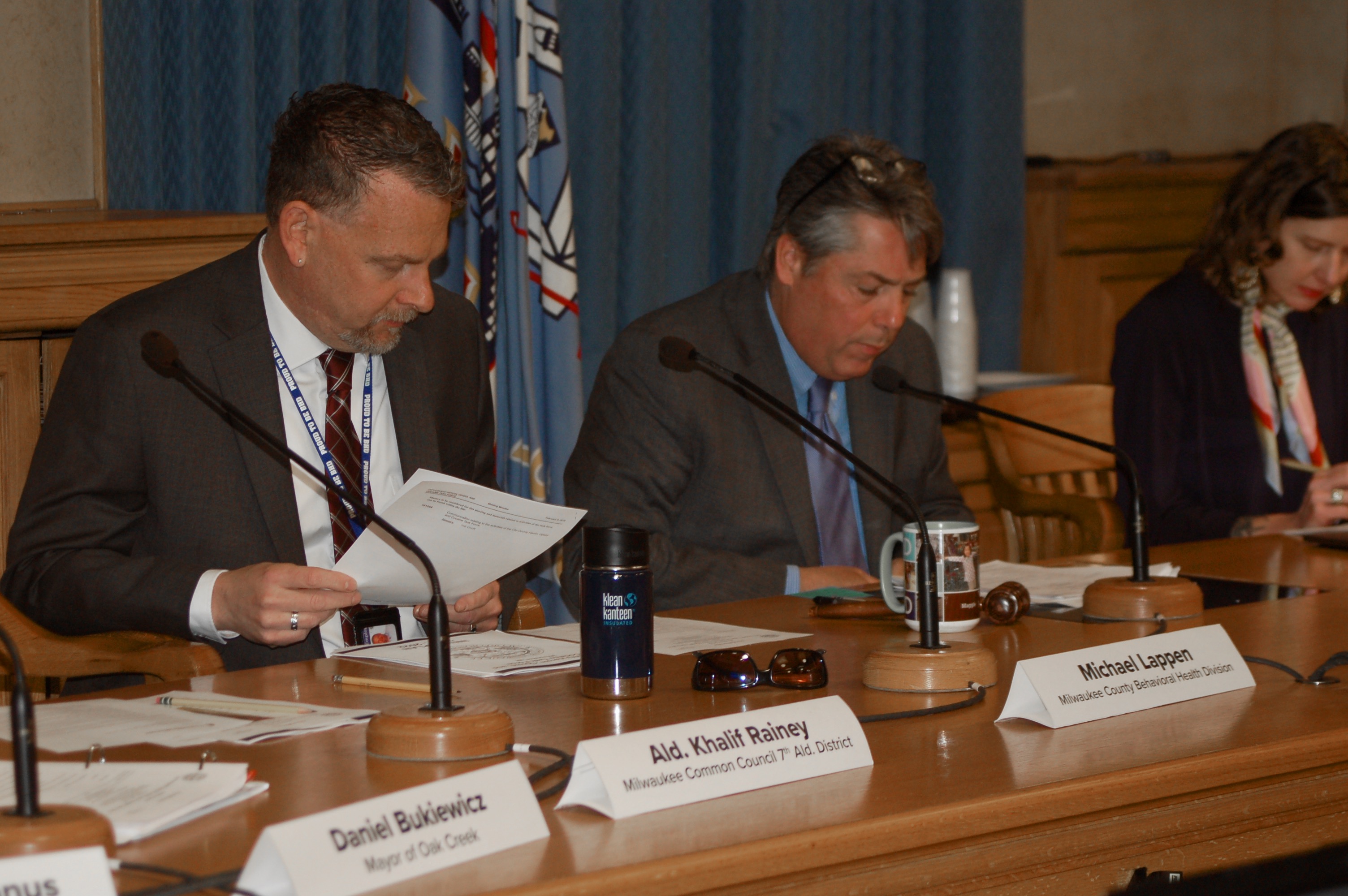 Michael Lappen (left), administrator of the Behavioral Health Division (BHD) for Milwaukee County, and Ald. Michael Murphy co-chaired a meeting of the City-County Heroin, Opioid and Cocaine Task Force in May. (Photo by Edgar Mendez)

Paul Mozina, a retired IT professional and an activist who has opposed the War on Drugs since the early 1980s, calls out the Milwaukee City-County Heroin, Opioid and Cocaine Task Force for failing to follow up on a DEA whistle-blower’s testimony that “physicians are pumping pills on the street.”

The Milwaukee City-County Heroin, Opioid and Cocaine Task Force is wrapping up nearly two years of effort with its final report due by year end. The last Task Force Community Brainstorming Session is scheduled for Tuesday, Nov. 27 from 5:30 pm to 7:30 pm at St. Ann Center, 2450 W. North Ave. The last regular meeting of the Task Force will be on Friday, Nov. 30 at 9 a.m., Room 301-B, Milwaukee City Hall.

Ald. Michael Murphy has been the driving force behind a diverse team of city and county departments, and their partners in the community — even taking on the role of chairman of the task force after former Health Commissioner Bevan Baker’s sudden departure. Many lives will be saved as a result of the efforts of everyone involved with the task force. They will be implementing new and creative strategies in the areas of emergency response, supply reduction, treatment, education and mental/physical health to help reduce the harm caused by the consumption of illegal substances.

Given the sincerity, integrity and intelligence of the task force members, I’m having a hard time reconciling their response to the whistle-blowing testimony provided to them by DEA Diversion Control Division Supervisor Kathy Federico, at the July 21, 2017, meeting of the task force. Federico, a 28-year DEA veteran, testified (my emphasis):

…And you did talk about some of the administrative proceedings that we can take against our physicians that are over prescribing and not prescribing in a legitimate manner, that puts oxycodone and hydrocodone on the street. And we do have a lot of those.

And I mean the other issue we have is, is having prosecutions of physicians that are pumping pills on the street without people having legitimate medical problems. And that’s an issue we address all the time because nobody wants to put a doctor behind —in jail.

…You talk about the PDMP (prescription drug monitoring program) and having this big impact. The PDMP has been out there for a long time and we had some impact initially when it started. I don’t know exactly what issue you want me to address but some of the PDMP issues, is, yes, it’s very true that the doctor is going to have to check, it’s going to be mandatory, but there are no consequences if the doctors do not check. And we have a lot of the doctors that are not looking at the PDMP.

A PDMP is a state-based electronic database that tracks the prescribing and dispensing of controlled substances.

There were no follow-up questions for Federico from the task force. I thought that was a pretty serious confession coming from the DEA Diversion Control Division Supervisor and I spent the following year sending emails and letters to task force members, the Common Council, the Mayor, County Board Supervisors, the County Executive, the District Attorney and many local media outlets — there was almost no interest. Ald. Bob Donovan did ask Murphy about this at the March 8, meeting of the Public Safety and Health Committee, at which time Murphy pledged to follow up with the DEA.

On Aug. 27, Murphy did send a request for information to Paul E. Maxwell, DEA Assistant Special Agent in Charge, in which he mentioned the issues with the Prescription Drug Monitoring Program, but he did not quote Federico’s statements explaining that the DEA knowingly had a lot of doctors who were “pumping pills on the street.”

Thus, in his reply, Maxwell did not address obvious questions like: How many physicians were/are involved? How frequently were/are they prescribing illegally and in what quantities? What are you doing to stop the pill pumping? According to the DEA’s Criminal Cases Against Doctors website, there were only two cases in the last four years reported in Wisconsin. Why are there so few criminal prosecutions of physicians given Federico’s testimony? Did the DEA report any physician that it was aware was not using the PDMP to the Controlled Substances Board? What action is the DEA taking now when it becomes aware that a physician is not using the PDMP?

I appreciate the effort of Murphy and his staff to follow up with the DEA. But I think that a golden opportunity to open a constructive dialog with the DEA was missed back in July 2017, and that the DEA still has not been held accountable for what I consider to be malfeasance in its oversight of physicians that were/are “pumping pills on the street.”