Chartena Nicholson was playing hide-and-seek with her cousins one day in a dark basement. On the verge of being caught, she made a dash for a new spot when she tripped over something. That something turned out to be a pool table, and at that moment, Nicholson discovered the game of pool.

Nicholson, along with several other Dr. Martin Luther King, Jr. Elementary School students, shared their discoveries during a recent Ex Fabula StorySlam hosted at the school.

Deaduri Gales, the parent coordinator at MLK Elementary, reached out to Ex Fabula earlier this year and together they began putting together a series of six workshops led by Blanche Brown, an Ex Fabula fellow and storytelling coach.

“For us, it’s really important that the coach matches the background of the individual served,” said Megan McGee, a founder of Ex Fabula.

MLK Elementary has a predominantly black student population and it focuses on African-American heritage. During the school’s morning meeting – called a mbongi in African tradition – the students were introduced to Brown. She shared her story and encouraged students to sign up for the workshops.

“Everybody relates to stories and stories are a part of our lives,” said Brown. 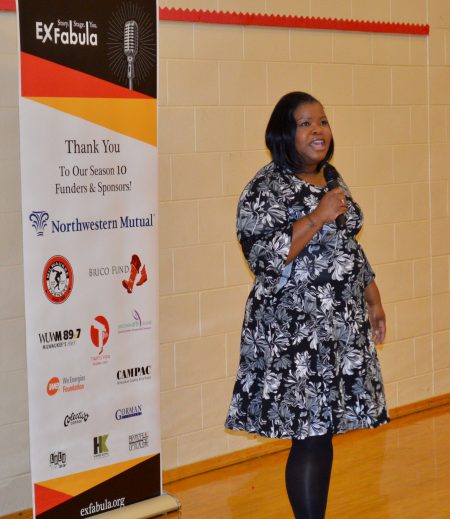 Tamara Hogans tells the story of how the unrest in Sherman Park in 2016 led to her current position as community engagement coordinator for Bader Philanthropies. (Photo by Ana Martinez-Ortiz)

“When people tell a story, they’re sharing a piece of their personal life with the audience, she said. A story may resonate with an audience member because it is similar to his or her own, she added.

Ex Fabula began in 2009 as a grassroots program, when five strangers decided that Milwaukee needed a storytelling initiative. Megan McGee, one of the founders, explained that they had all been to storytelling events in other cities and they listened to podcasts. So they organized a story slam and eventually that turned into Ex Fabula, which is Latin for “from stories.” In 2014, Ex Fabula began hiring staff members.

“Once we started having staff, that started allowing us to do more of these collaborations,” said McGee. “At first we were just doing these story slams for adults in bars.”

While the events were successful, Ex Fabula recognized that it was only reaching a small percentage of the city. The goal was for people to not only share their stories but to listen to what others had to say, McGee said. Eventually, Ex Fabula began creating workshops and organizing storytelling events for adults and teens.

Brown said each workshop at MLK began and ended with an icebreaker to encourage the students to relax. Each week, five different students — known as scholars — participated in the workshop. As time went on, Brown noticed that more children became comfortable with the process, and helped each other formulate their stories.

Eventually, nine students were selected to perform their stories, although only five chose to participate. Brown said that the students were excited and nervous.

“It’s a story about discovery [and] all of us have had a discovery,” she told them. “You just have to figure out which one you want to talk about.”

The magnitude of the discoveries varied. DahiyJa Scott, a fifth-grader, discovered that she had a nut allergy after eating some pecan pie. Imani Trummell discovered that if she put forth the effort she could shuffle — a type of footwork — and then teach the skill to her friend.

Although not all the students who participated in the workshop shared their stories, Rubie Mizell, secretary of arts at MLK, said the students learned a lot, including how to speak and how to weave a theme throughout a story. During the workshops, students also learned how to focus, write, enunciate and project their voices.

According to Mizell, MLK is part of a national program started by former first lady Michelle Obama called “Turnaround Arts.” The purpose is to boost academic achievement through integrating art into the curriculum.

Editor’s note: This story has been updated to correct Tamara Hogans’ last name. We apologize for the error.