You are here: Home / Home / Carousel / Forum surfaces ongoing controversy over prime cause of lead poisoning in Milwaukee
Share this... 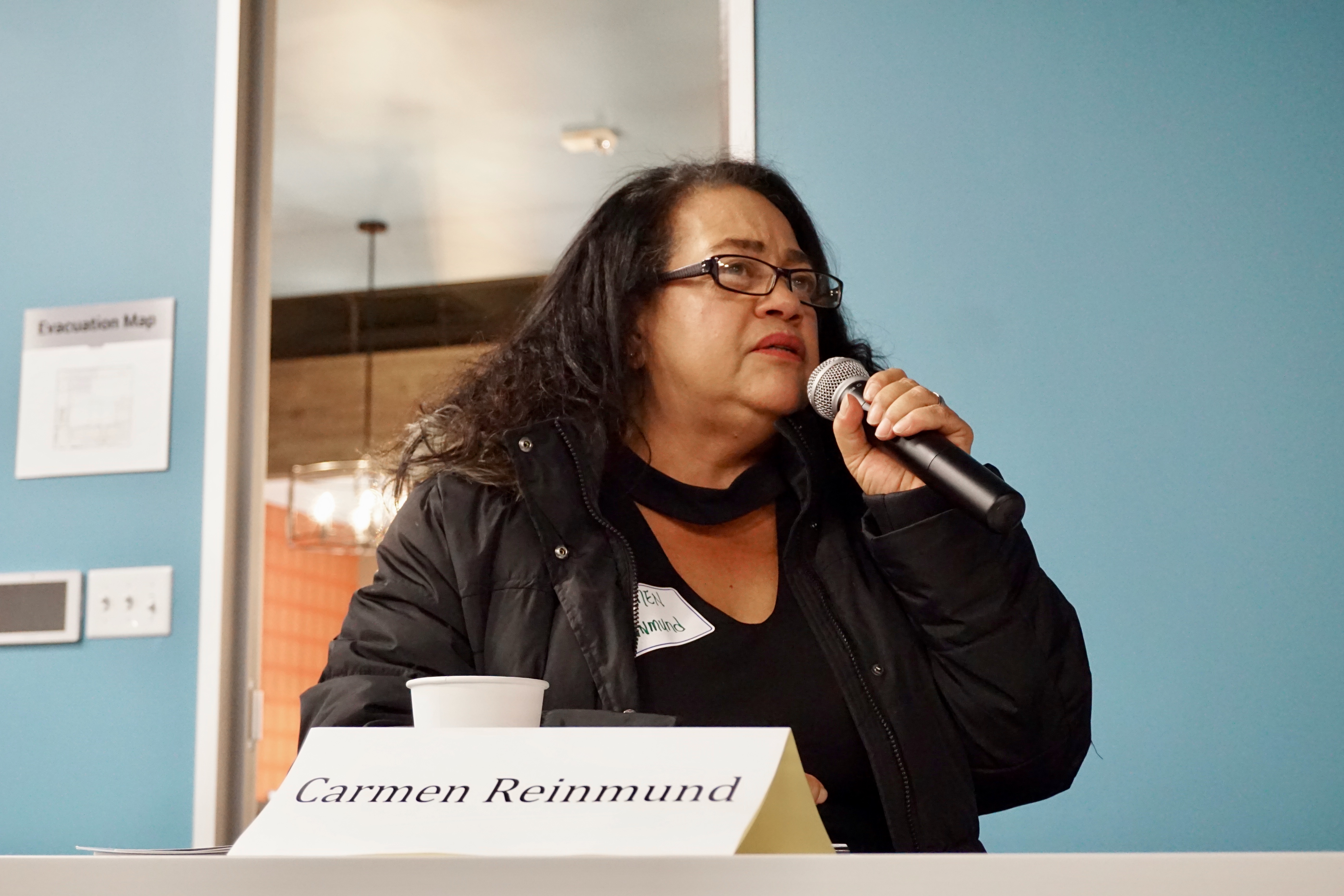 Carmen Reinmund answers a question from the audience. (Photo by Abby Ng)

Wisconsin is 48th out of 50 states in per capita public health spending, which makes it challenging to address the problem of lead poisoning in Milwaukee, according to Helen Meier, an assistant professor at UW-Milwaukee’s Zilber School of Public Health.

“How are we going to address serious health inequities when we’re 48th out of 50?” she asked, speaking to a group of about 50 people at a recent public forum on lead issues hosted by the League of Women Voters (LWV).

Lack of sufficient resources is among the barriers to lead poisoning prevention in the city, Meier said, noting that community members and the local government must work together to address these barriers.

In addition to LWV members, the audience included representatives of the Freshwater for Life Action Coalition (FLAC) and Get the Lead Out Coalition. With presenters from the Milwaukee Health Department (MHD), Sixteenth Street Community Health Centers and UW-Milwaukee, the goal of the forum was to provide information from a variety of perspectives and encourage lead prevention advocacy.

“We wanted to bring together groups to move forward on the lead issue,” said Carol Diggelman, who organized the event. “We all need to advocate for evidence-based actions and policies.” 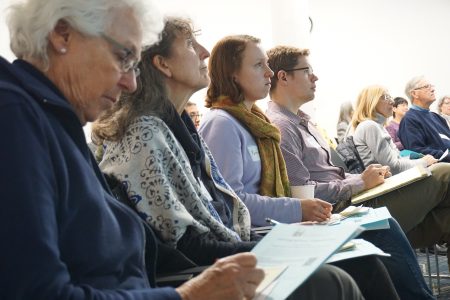 Forum attendees listen and take notes during the presentation. (Photo by Abby Ng)

Residents should also advocate for more research in Milwaukee, Meier recommended. Researchers have studied causes of lead poisoning nationwide, statewide and in Madison, but not as extensively in Milwaukee, considering how prevalent the issue is in the city, she said.

At least 2,851 children under the age of 6 in 2016 had elevated blood lead levels, according to city data. A 2014 Wisconsin Department of Health Services report shows that nearly half of the children who tested positive for lead in the state are black.

The Milwaukee Health Department estimates that removing every lead service line and making every building in the city lead-safe would cost nearly $2 billion. Without that much money available, the city has taken a targeted approach, focusing on children under 6, lead paint hazards, areas with high poisoning burdens and those with lower incomes, according to MHD public health planner Michael Stevenson.

The city has allocated $20 million in its 2019 budget for lead-risk reduction. In the short term, MHD plans on abating lead-based paint hazards and providing cleaning kits to the most at-risk areas.

“We need to be coming from a health equity framework and focusing our resources on the most vulnerable among us,” Meier said.

She added that institutional trust must be improved. Former Health Department commissioner Bevan Baker resigned after it became known that thousands of residents were not contacted when their children tested positive for lead. Now with a new health commissioner and case tracking systems in place, MHD is hoping to regain the public’s confidence, said Stevenson.

“We are doing our best to rebuild this program,” Stevenson said. Jeanette Kowalik was confirmed by the Common Council as the city’s health commissioner in September.

Robert Penner, a member of the Get the Lead Out Coalition, said he thinks the department’s efforts “are a good step forward,” but he remains skeptical about the city’s intentions.

“What concerns me most is that we don’t all necessarily share all the same information,” she said.

The Health Department has long argued that lead paint is the main cause of lead poisoning in the city, while advocacy groups such as FLAC and the Get the Lead Out Coalition believe that lead in the water is the primary cause

According to the city, in February 2018, there were 76,244 lead service lines in Milwaukee. The city has replaced 764 lines so far this year.

Of 121,240 houses that were built before 1978, when paint containing lead was banned, the city has made 18,147 of them lead-safe. Homes built before the 1950s are reported to likely have lead-based paint and lead laterals or plumbing.

In an opinion piece for the Milwaukee Neighborhood News Service, Yanna Lambrinidou and Paul Biedrzycki wrote, “Framing the argument as ‘paint vs. water’ reduces a complex problem to distracting finger-pointing, obfuscates what is known and not known about different exposure pathways, and leaves residents sub-optimally equipped to protect themselves, their families, and their communities from preventable exposures.”

They also point out that “a growing body of evidence suggests that both paint and water are implicated in childhood lead poisoning.” Lambrinidou is a founding member of the Campaign for Lead Free Water and Biedrzycki formerly served as a director at the City of Milwaukee Health Department.

Everyone agrees that no amount of lead exposure is safe. Elevated blood lead levels are associated with permanent neurological and behavioral disorders, especially in young children. Lead also poses a risk to pregnant women and women of child-bearing age.

“There needs to be more cooperation between people who think paint is the issue and that water is the issue,” Penner said. “We need to come together to come to a consensus.”

Reinmund added, “It’s everyone’s problem. We have a lot of work to do.”