You are here: Home / Home / Carousel / Nearby Nature encourages neighborhood kids to explore outdoors
Share this... 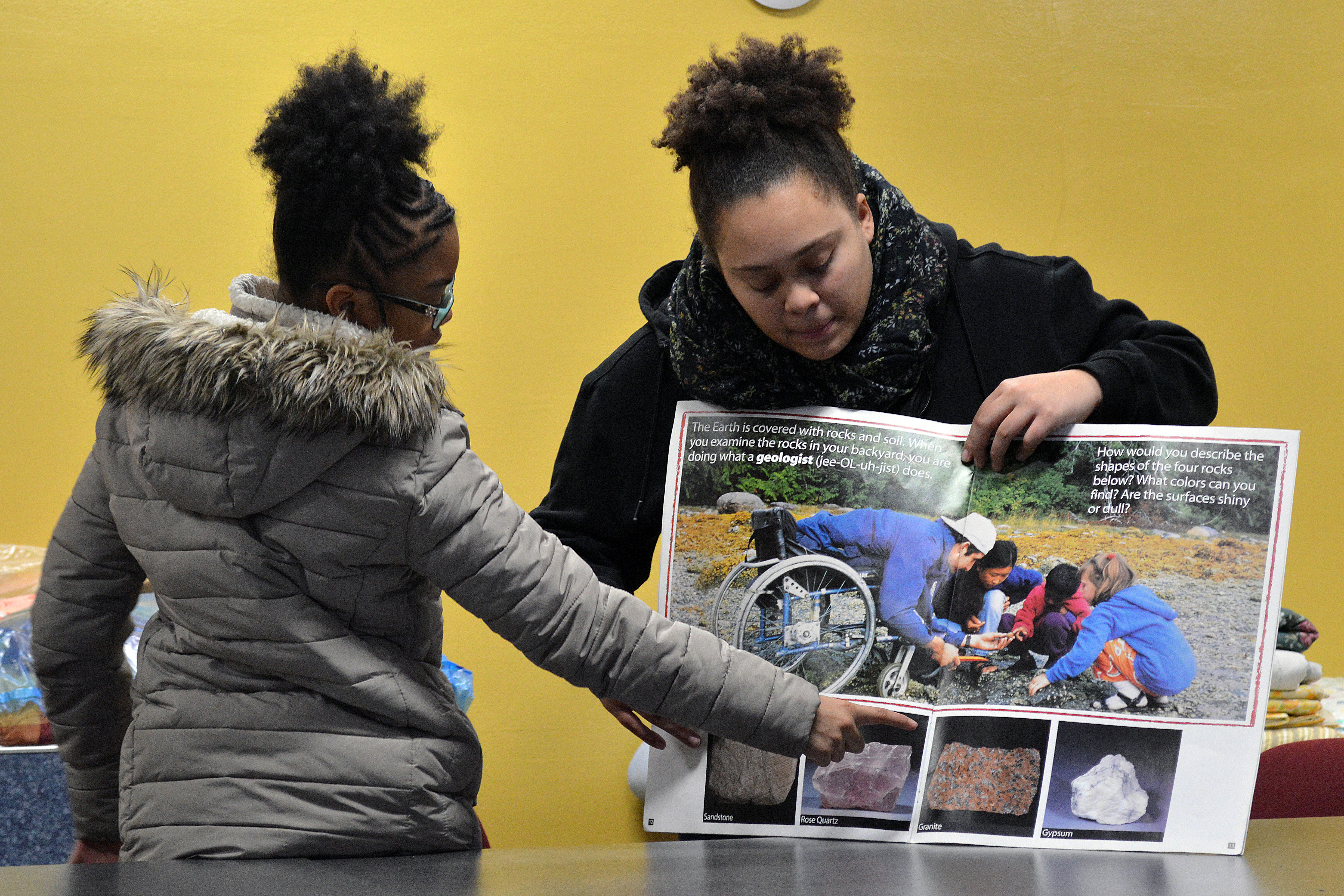 Madison Campbell (left) informs instructor Olivia Raasch and classmates how to classify rocks based on texture and appearance. (Photo by Ana Martinez-Ortiz)

Ten-year-old Madison Campbell thinks she wants to be a doctor when she grows up. She’s also interested in meteorology and has some knowledge of geology. While she learns some science during school, she takes advantage of other opportunities to learn more. One such opportunity is Nearby Nature, an after-school program at the Lighthouse Youth Center, where Madison and other students can dive more deeply into the realm of science.

Nearby Nature was established by the Great Waters Group, part of the Sierra Club of Wisconsin’s John Muir Chapter. It began last year when the Sierra Club awarded six $20,000 grants to certain cities to make environmental action more inclusive and diverse. As one of the winners, the Milwaukee group decided to use the money to create youth programs, and Nearby Nature was born.

David Thomas, one of the founders of Nearby Nature, is a longtime member of the Sierra Club and other organizations including Friends of Lincoln Park. Thomas had noticed a lack of diversity in environmental programming. A lot of effort was made to engage people in suburban neighborhoods, while impoverished neighborhoods were often ignored, he said.

Thomas noted that while neglected land could become a nature preserve, an area such as Lincoln Creek within the 30th Street Corridor was used as a dumping ground for spare tires, empty water bottles and other trash. Through the grant, Thomas created a partnership with the Urban Ecology Center. In exchange for approximately half the grant money, the UEC would curate and teach science and nature classes. The rest of the grant went towards community outreach. 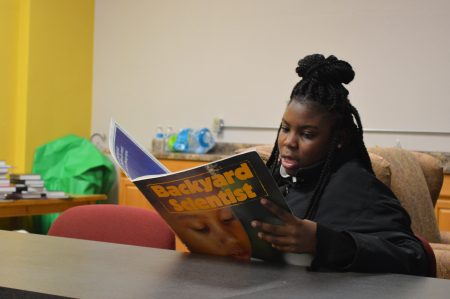 Nyllah Allen wants to be an astronomer after reading about astronomy during a Nearby Nature class. (Photo by Ana Martinez-Ortiz)

Meghan Forseth, the interim branch manager for UEC’s Riverside Park location, explained that the classes and programs depend on the season. During the summer, UEC takes kids on bike rides to Lake Michigan or rock climbing at Riverside. During the winter, the children might go snowshoeing or sledding.

Amariona Barbee, who participated in the pilot summer program, said she particularly enjoyed bird watching. Instructors helped the children look through books and choose a bird to look out for. Amariona chose a bluebird. Although she didn’t spot one, she said it was her favorite activity.

“Our goal is always to get kids outside in nature and enjoying it,” Forseth said. “By taking them regularly it becomes woven into the fabric of their lives.”

Often educators bring native animals to the classroom so that students can engage with them and learn more about their habitats. According to student Da’Bresha Cobbs, one time she and her friends were able to touch snake skins. This fostered her interest in snakes and spiders; her favorite is the daddy long legs.

Instructors such as Olivia Raasch work hard to get the children excited about the program so that they are more likely to participate each week. Games and activities that call on the children’s knowledge keep them engaged.

Madison said part of the reason she participates in Nearby Nature is the fun games. She particularly enjoys playing charades, where the children mime animals such as sharks and lions or celebrities such as Beyoncé and Cardi B. During the program, Madison also enjoyed sharing her knowledge about different cloud classifications and specific rocks.

After reading “Backyard Scientists,” the students drew a picture of themselves studying different sciences. Nyllah Allen, who attends Nearby Nature at the Lighthouse Youth Center, drew herself as an astronomer because she enjoys looking at the night sky and studying the stars.

Several of the young participants said they don’t learn a lot of science during school and Nearby Nature gives them the opportunity to learn more. Da’Bresha recalled learning about hibernation techniques for bears and squirrels. The kids also learned how to tap a tree for sap.

“Ultimately, we’re teaching our next generation of what we hope are stewards of the earth,” Forseth said.

Amariona said she always makes an effort to clean up the yard and street by her house. She added that she would like people to be more considerate by not throwing their trash into bodies of water. Likewise, Da’Bresha called for people to think twice before clearing away trees, since animals live in trees.

Thomas isn’t sure if the Sierra Club will award another grant. In the meantime, he’s doing all he can to raise money to continue the program. Nearby Nature recently became part of the Milwaukee Environmental Consortium. Under the MEC, it can continue into 2019, hire personnel and apply for more grants.

“We’ve got these opportunities waiting to happen if we get the funding,” he said. “There’s a very vibrant movement in the central city.”

Editor’s note: This story has been updated to correct which organization established Nearby Nature. We apologize for the error.