You are here: Home / Home / Carousel / Historic designation for Washington Park sparks spirited conversation on public land use
Share this... 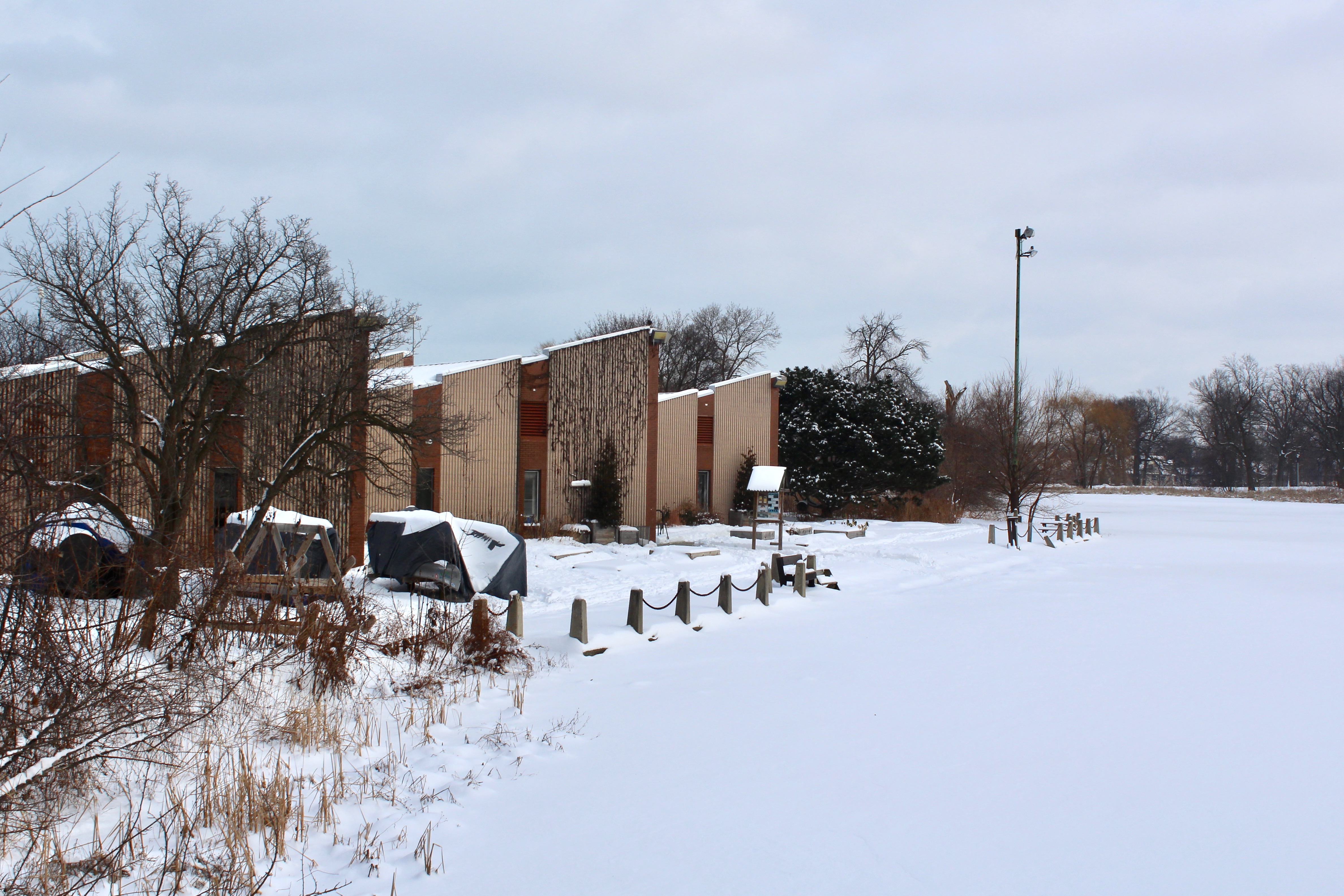 Snow covers the lagoon behind the Urban Ecology Center in Washington Park. (Photo by Allison Dikanovic)

While strolling through the rolling vistas that wind throughout Washington Park, one might encounter people kayaking on the lagoon, attending a nature class or viewing the abundant wildlife such as warblers nesting in tree groves during an early morning bird walk.

A lesser-known aspect of the park is that it was designed in the late 1890s by renowned American landscape architect Frederick Law Olmsted, whose parks have historic designations in cities around the nation, including Milwaukee’s Lake Park on Lake Michigan.

A proposal to secure a permanent historic designation for Washington Park has evolved from what Ken Leinbach, executive director of the Urban Ecology Center (UEC), initially called “an awkward situation,” into a conversation about how public land should be used.

UEC, a nonprofit that serves neighborhood schools and community members with a wide variety of programs and activities, opened its facility within the park in 2007. During the past two years, UEC and District 5 County Supervisor Marcelia Nicholson organized a series of public community meetings with neighborhood residents to discuss UEC’s plans to invest in the park.

“We’re a community organization and we’re a transparent organization so we sought community input in terms of … what we do…in Washington Park,” Leinbach said.

In July, county supervisors tentatively approved the terms for a 25-year lease that allows UEC to expand its existing building — originally a boathouse — at 1859 N. 40th St. UEC is leasing the building and the land beneath it. 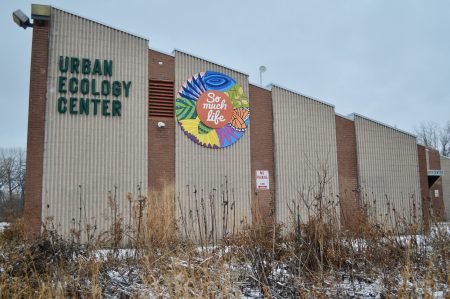 The lease terms include two automatic renewals, as long as both parties are in compliance. UEC intends to raise $12 million to renovate and expand the building, and $2 million for other improvements such as repairing the lagoon footbridge and building a new parking lot, according to a news release from Nicholson.

Terry Evans, UEC branch manager at Washington Park, noted that the boathouse building is not just for UEC; “it’s a building for the community.” Expanding it would allow UEC to increase the number of schools it works with from 14-16 to close to 40, he said.

The proposal to designate Washington Park a historic site was submitted by Dr. Michael Carriere, an urban historian and Washington Heights resident, to the Milwaukee Historic Preservation Commission (HPC) in December.

He said he wants the historic designation to honor Olmsted’s vision for the park, create guidelines for organizations investing in the park and potentially leverage funds.

If the park is granted permanent historic status under the 42-page set of guidelines developed by the Historic Preservation Commission, UEC may have to alter its plans.

UEC representatives said at the initial HPC meeting in December that they were concerned the language in the proposal would prohibit them from expanding the boathouse building. The guidelines set limitations on the height and “footprint” of expanded structures.

Carriere said he worries about the park’s future if it continues to lack a historic designation because the County Parks System has publicly stated that it does not have enough money to maintain it.

“I’m not suggesting that historic designation is a silver bullet,” Carriere said. “But it does provide some stability for a park and it also can be used as a fundraising mechanism.” 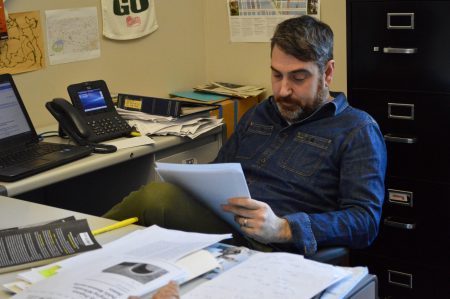 An article by Carriere published by Urban Milwaukee in August questioned the county’s decision to “cede” land to UEC “for redevelopment without any stated intent to retain existing elements of Olmsted’s design.” However, Leinbach said the article included misinformation; specifically that the county was ceding land to UEC, and that UEC was carrying out its plans without public oversight.

“The [county] park isn’t giving us any land,” Leinbach said, adding, “We don’t do anything without approval and public oversight.”

“I love Urban Ecology Center,” Carriere said. “My intent was never to stop UEC’s efforts in Washington Park.” However, he said the terms of the lease were “very open ended, and my concern was that it would become a template for other potential groups to offer partnerships with the park system and do things that may not be as nice.”

Ald. Russell Stamper, whose district includes the park, said he began receiving calls from residents expressing the desire for a historic designation about four months ago, including from Carriere, the Historic Preservation Commission and others.

He added that UEC has been an asset to the community, especially with youth in the summer. “They [UEC] want to upgrade and make it better, but we want to make sure that we respect [all] the residents,” Stamper said.

According to Leinbach, UEC staff walked Carriere through the park and explained the plans to expand the boathouse facility, implement a land restoration plan to restore natural species and fix the footbridge over the lagoon.

“I wanted to make sure that the history of the park was present during all of these discussions,” Carriere said. “That doesn’t mean that I think UEC disparages that history. I’m talking with them now about ways we can do this collectively.”

Retired social worker Mike Howden has lived with his wife across from Washington Park for 50 years and calls the neglected park paths and bridges “break-a-leg walkways.” He said he has been involved in neighborhood organizations, including Washington Park Partners. Despite his commitment to the park, he said that he, like some other residents, does not know what a historic designation would mean and to what extent it would limit UEC’s plans.

“I know some of the people who are historians and history buffs on the Olmsted Parks and I can certainly agree with them and a lot of what they do,” Howden said. “But it would be very sad if the UEC would leave because they couldn’t come to terms.”

Dave Boucher, who has lived in Walnut Hill, an adjacent neighborhood, for more than 20 years and has a degree from UWM in urban studies, sent a letter to the preservation commission supporting the designation. He also served on the Steering Committee for the “Washington Park Revitalization Plan” in 2000. He said many of the goals to improve the park haven’t changed in the last 19 years.

Boucher raised concerns about the potential consequences of UEC’s land management plan to restore some of the natural species. He said that changing the original “low-maintenance landscaping,” may invite invasive species such as buckthorn, nightshade or garlic mustard to take over. UEC has “naturalized” eight acres of land and the new county-approved restoration plan would add 12 acres.

According to Evans, “We want to keep that Olmsted feel, but we also want to bring back a lot of the natural insects and plants, that are no longer there due to man.”

Leinbach noted that the 20 acres managed by UEC make up less than one-fifth of the park.

Leinbach, Nicholson and County Executive Chris Abele, among others, initially wrote strong letters of opposition to the historic designation. However, Leinbach now says, “We would like to be able to support this [historic designation] concept because we are proponents of Frederick Olmsted; because we feel like we’ve been honoring his work.”

The preservation commission has postponed making a decision so that all parties can collectively discuss the best way to balance the historic, social and ecological aspects of the urban public space.

“It’s very exciting what’s happening now because there is a means by which it is possible to have communications instead of just setting up battle lines,” Boucher said.

The fact that Washington Park meets the requirements for permanent historic designation is uncontested among all parties.

“Under our ordinance, if one or more of the criteria for historic designation are met, this commission has essentially no choice but to grant historic designation,” said Ald. Robert Bauman, chair of the HPC. The decision would then go to the Zoning, Neighborhoods and Development Committee and ultimately to the Common Council, which has a broader set of criteria by which to examine historic designation, Bauman added.

Sarah Toomsen, manager of planning and development at Milwaukee County Parks, added that the park system is willing to work cooperatively with UEC and supporters of the historic designation to create guidelines for plans in Washington Park.

Evans said that community members want to see UEC’s work move forward. “Maybe we just need to set up those guidelines together as a group and then move forward: Mr. Carriere, the county, the city and UEC.”

According to Leinbach, UEC is looking for the best way to make Washington Park “sing in a way that it accomplishes both social and ecological good and honors the history: the whole history.”

Editor’s note: This story was updated to reflect that the 42-page set of guidelines was developed by the Historic Preservation Commission, not by Michael Carriere. We apologize for the error.