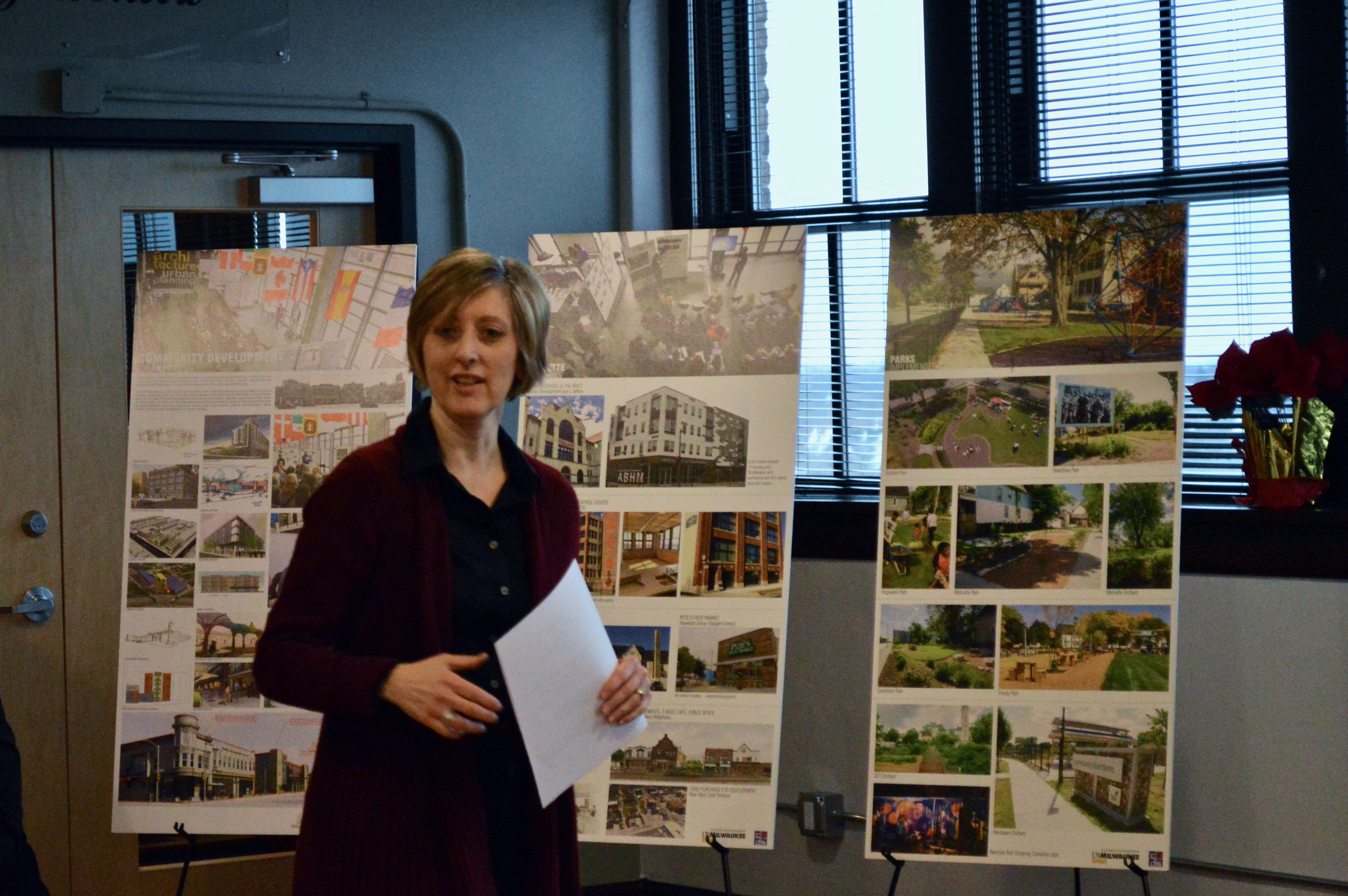 Carolyn Esswein explains her process of charrette, where she brings together residents, funders and designers for community-based development planning. (Photo by Analise Pruni)

Editor’s note: This article is one of an occasional series profiling the 12 finalists for the Milwaukee Awards for Neighborhood Development Innovation (MANDIs).

When Kelsey Otero first met Carolyn Esswein while working for Near West Side Partners in 2015, she said she knew nothing about real estate or redevelopment.

“Carolyn really took me under her wing,” said Otero, co-chair of the Commercial Corridor working team for NWSP, a nonprofit dedicated to revitalizing the Near West Side. “She didn’t just tell me: ‘this is what you need to do.’ She helped me to understand the process and that’s helped me overall become a better leader.”

Esswein has been an architecture and urban planning consultant in Milwaukee for more than 26 years, as well as an adjunct professor at University of Wisconsin-Milwaukee since 2002. In 2012, Esswein left a corporate job at GRAEF for the director’s position at Community Design Solutions (CDS) and a permanent teaching position at UWM.

As director of CDS, whose mission is to provide preliminary design and planning services to underserved communities, she has been instrumental in helping residents envision the potential of their neighborhood.

Esswein’s charrette process for community-based development distinguishes her from other planners. Charrettes allow all stakeholders in a project the opportunity to resolve conflicts as well as forge solutions.

Esswein’s development charrettes engage with residents of underserved communities to determine what they would like to see in a project, park or other development.

“The process of charrette is an interactive design day, but there’s a lot of work that comes before a charrette,” Esswein said.

Otero noted that she worked with Esswein on the Near West Side charrette for six months before the actual design day in April 2016. They identified six key properties that had potential for mixed-use development and revitalization and held focus groups with funders, developers and more than 100 residents to brainstorm ideas. 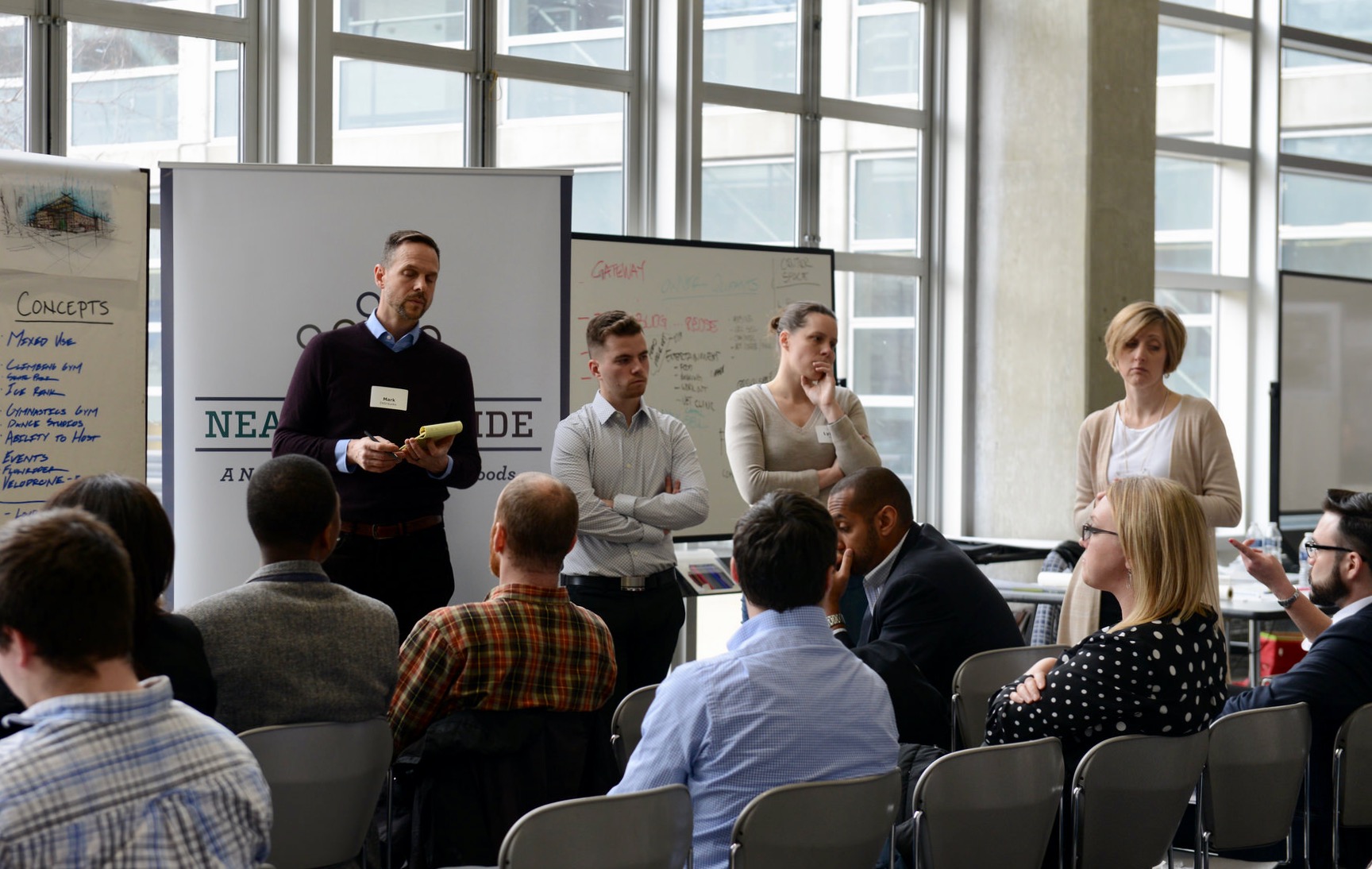 Mark Debrauske, Nate Waddell and Lyssa Olker of HGA Architects and Engineers, and Carolyn Esswein, director of Community Design Solutions at the UWM School of Architecture and Urban Planning, listen as an audience member suggests an idea at the Near West Side charrette. (Photo by Sue Vliet)

Esswein’s charrettes have guided the vision, investments and implementations of many projects throughout the city, including the previously vacant Garfield Avenue Elementary School that was converted into housing, along with mixed-income apartments at The Griot and America’s Black Holocaust Museum, in the Bronzeville neighborhood.

The mixed-use Welford Sanders Historic Lofts, in the Harambee neighborhood, was also envisioned at a charrette.

Her later involvement with the Lindsay Heights redevelopment plan led to the construction of 165 new homes, 100 homes being rehabbed and more than $70 million in investments.

“We select sites that are the most catalytic and have the opportunity to spur additional investment,” Esswein said.

Deshea Agee, executive director of the Historic King Drive Business Improvement District (BID), has worked with Esswein on numerous occasions, including the Bronzeville and MLK Drive charrettes. He said that when she organizes a charrette with all the stakeholders it is like she is conducting an orchestra.

“[She] knows all of the sounds and knows when they need to play and [is] able to put it all together at the right time,” Agee said. “It gives community residents a way to understand how development happens.”

Esswein said it is important to connect residents with local developers and architects and to understand the nuances of each neighborhood.

Esswein employs about a dozen of her UWM students annually through Community Design Solutions, where they work with client groups on their projects.

Bill Noelck, who worked with Esswein at CDS while in graduate school, said planners can “put our blinders on and just do design in a vacuum.” Esswein’s process allows them to connect with people they don’t work with very often. Community members are “some of the most passionate people with the best visions, addressing some of the most challenging problems,” he said.

Otero said that Esswein is involved with projects well past the initial design process.

“She kicks a project off, she sees it through the charrette, and then she continues to stay involved with the progress at each and every site,” she said.

One of Esswein’s favorite projects is the first HOME GR/OWN in Ezekiel Gillespie Park, which was a product of the Lindsay Heights charrette. HOME GR/OWN, an initiative of Mayor Tom Barrett and the City Environmental Collaboration Office (ECO), was designed to create access to greenspace development, grow healthy, local food and repurpose vacant city lots.

Nancy Frank, who teaches with Esswein at UWM, said she shows her students how to trust and listen to the community, rather than think they are the experts.

“She has inspired a number of students to see their future, not in designing great skyscrapers, but to really work at a grassroots level; working with communities that really need design services,” Frank said.