You are here: Home / Community Voices / OPINION: A year after Parkland shooting: ‘I feel like my school doesn’t trust me’
Share this... 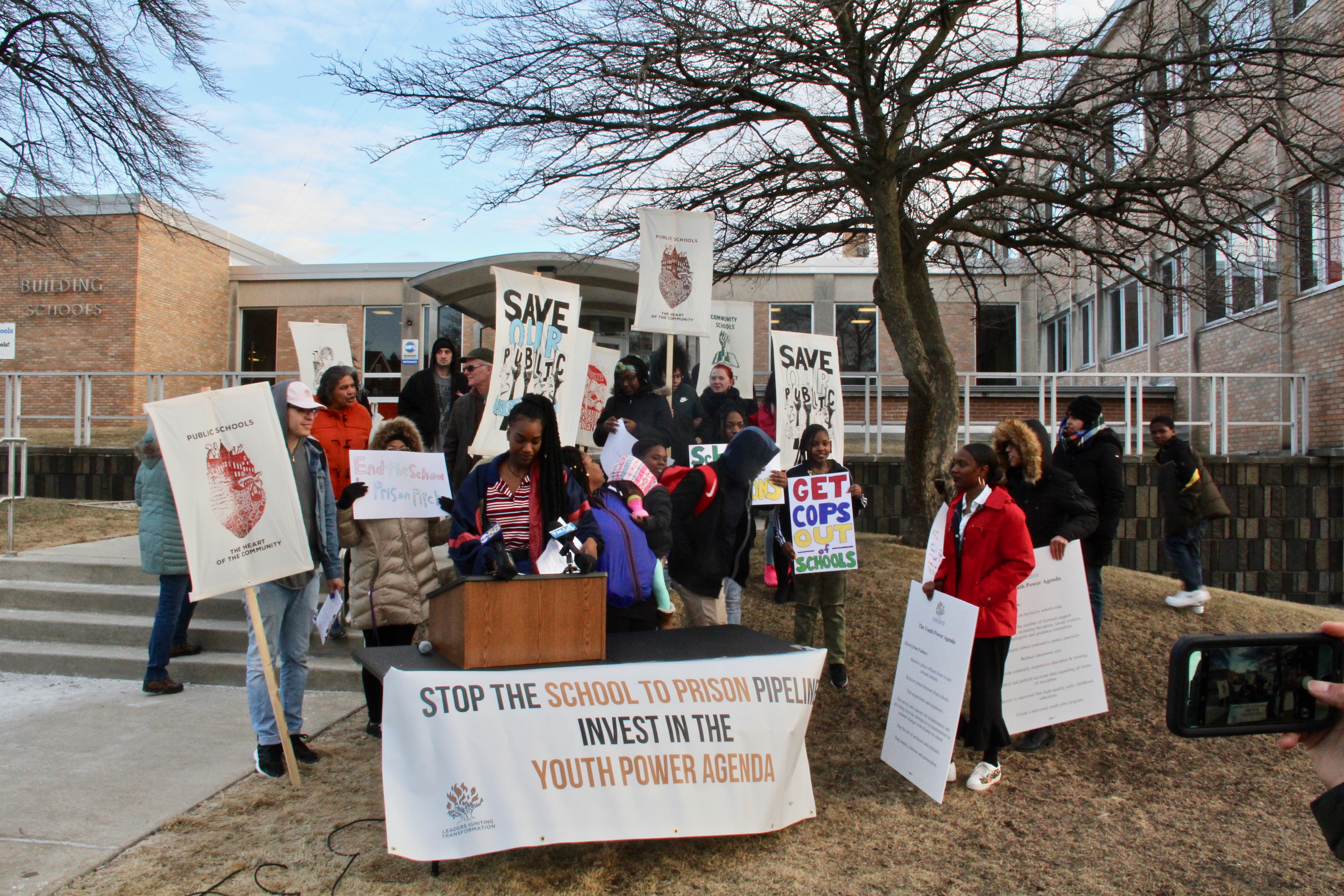 Students gathered outside of an MPS board to protest in March 2018. (Photo by Dean Bibens)

Leticia Alavez-Lopez, an MPS student and Youth Fellow at Leaders Igniting Transformation, reflects on what she’s seen at her school in the year since the Parkland shooting in Florida.

A year ago today, 17 people’s lives were taken far too soon during the tragedy at Marjory Stoneman Douglas High School. In Milwaukee, young people grieved for the students and the community in Parkland, Florida.

As the year went by, we saw the rage of desperate parents and terrified students grow as they watched elected officials respond by refusing to address the public’s rampant access to guns and instead exploited the tragedy to criminalize students of color. Young people across the country, including here in Milwaukee, demanded action! We saw no change.

Instead, we saw money being brought in to Milwaukee Public Schools (MPS), not to fund our education or invest in our students by providing the resources we need to learn and grow, but instead to make our schools even more like jails. After the tragedy, MPS applied for a grant for “school safety” investments. When it got it, they decided to use it to upgrade our metal detectors and surveillance equipment even more. This has done nothing but continue to oppress and criminalize our youth of color. Studies have shown that metal detectors do not reduce school violence, and instead make students feel less safe. In 2017, $19 million was taken away from our budget. This left textbooks in horrible conditions, over-crowded classrooms, few guidance counselors, and less extracurricular activities, among other cuts. Since then, these issues have only gotten worse.

Despite all the evidence that shows that these invasive and criminalizing measures fail to keep us safe, MPS continues to double down on this failed approach.  Every morning, the first thing I see at school is a metal detector. Instead of feeling welcomed, I feel like my school doesn’t trust me. I feel like they see me as dangerous, not a curious student. We are so controlled in our schools that I am not allowed to use the bathroom without a guard’s permission, I can’t go to the library, or visit the nurse without being guarded. We have at least four times as many guards in my school than we have counselors and MPS is considering adding even more cops to schools. This doesn’t keep us safe. It just makes us afraid.

We are being treated like inmates at a prison for “our safety” and we’re tired of it. Our voices are always the last to be heard when we should be the first people.

All over the world young people are leading the fight for justice. That is exactly what we will continue to do. On April 2, there will be a school board election. We are working hard to ensure that young people across Milwaukee can take control of our futures through this election. We have been talking with candidates, organizing with each other, and informing our peers about the race and the issues that matter the most to us.

Last year, Leaders Igniting Transformation (LIT) the black and brown youth organizing organization with which I work, released a report with the Center for Popular Democracy that described the devastating school-to-prison pipeline in Milwaukee and then outlined our Youth Power Agenda. We want every candidate elected to the school board to be in favor of the Youth Power Agenda and be willing to invest in opportunities for young people to thrive in our schools and divest from school policing and invasive security measures.

We want school board members who will make sure that all the opinions and concerns of young people, those attending MPS, be heard. I refuse to be added to the list of people who die daily due to gun violence or go to a school that feels like a jail.