You are here: Home / Home / Carousel / ‘We believe that they can come home and be a positive force for change:’ How one program helps people transition out of incarceration
Share this... 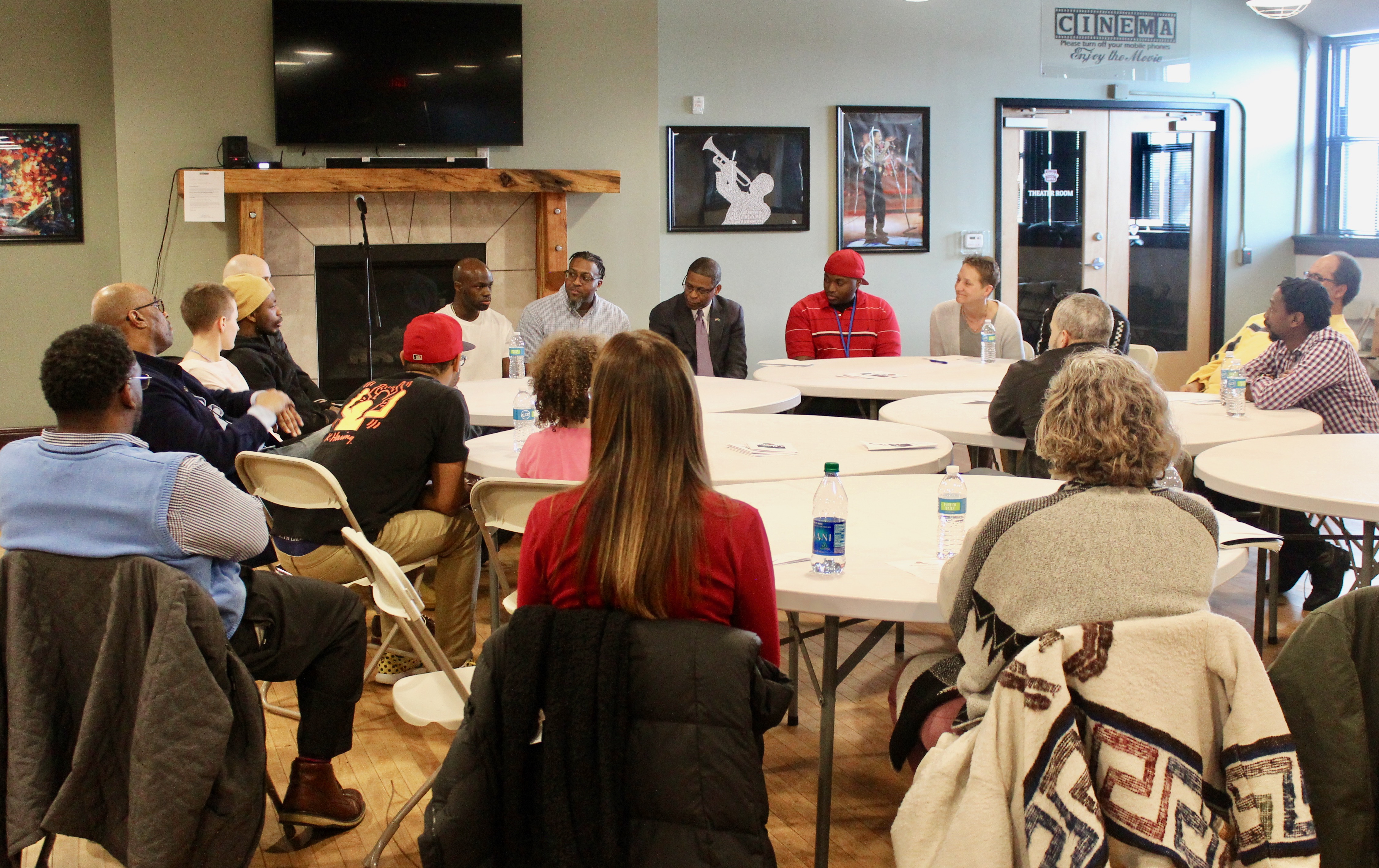 Guests pushed tables together to form a circle at the Alma Center’s most recent welcome home ceremony. (Photo by Allison Dikanovic)

Last week was a homecoming of sorts for Avery Stewart, who met his nephews for the first time.

Stewart had just finished serving a three-year sentence at Kettle Moraine Correctional Institution a week earlier and was starting a new life back in Milwaukee, where he lives with his sister.

Besides hanging out with his nephews, ages 2 and 5,  Stewart also attended a welcome home ceremony at the Alma Center, 2821 Vel R. Phillips Ave. as part of his participation in the Alma Brothers Smart Reentry program.

And in a sense, it was. Those gathered were honoring the beginning of a new chapter, and four men returning from prison to Milwaukee were the guests of honor.

“We’re having a party to celebrate these men in a way they haven’t been celebrated in a long time,” said Julie Landes, director of operations at the Alma Center.

Wisconsin incarcerates black men at a higher rate than any other state in the country, and more than  half of African American men in their 30s and half of men in their early 40s have been housed in state correctional facilities at some point in their lives, according to a study from the University of Wisconsin-Milwaukee.

“We want them to know that they are loved, they belong, and we are happy they’re back,” said Becky Redmond-Walker, re-entry services manager at the Alma Center. “We believe that they can come home and be a positive force for change.”

Alma Center staff members, family members, along with representatives from the Wisconsin Department of Corrections Division of Community Corrections, the U.S. attorney’s office and community-based organizations, attended the gathering and offered the men resources such as literacy or employment support.

As part of the ceremony’s ritual, each man was given the floor to say what he wanted, and then guests and staff told stories and called out positive characteristics in him. 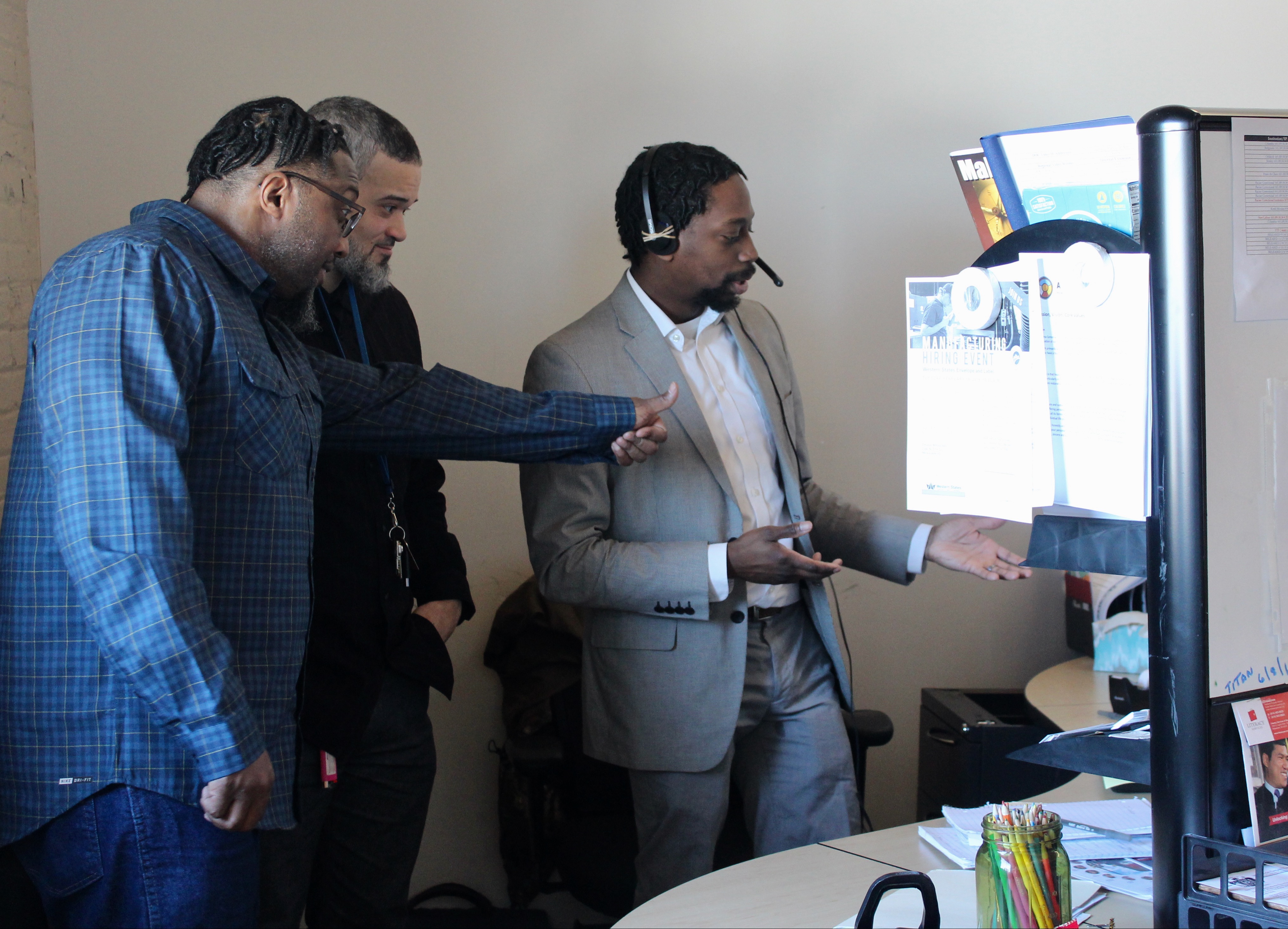 William Cainion (left) gives a thumbs up to a man inside prison who just earned his GED through a video conference. (Photo by Allison Dikanovic)

William Cainion, a re-entry guide at the Alma Center, said Stewart is driven and cares about others, and then he presented Stewart with a box.

Usually the Alma Center provides each man with a welcome home package with basic necessities, including T-shirts, socks, underwear, a wallet, a planner and hygiene products.

But the box for Stewart contained something different.

It was full of books to study to become a certified personal trainer.

“They were mine,” Cainion said. “And I know that you want to be a personal trainer, so I want you to have them now.”

Cainion’s job was created as part of a pilot program called Alma Brothers Smart Reentry, which started in February 2018. The program aims to significantly reduce recidivism and curb violent crime in Milwaukee by pairing men with a re-entry guide and a family support specialist for the last 12 months of their sentences, as well as for the first 12 months after they are released.

Stewart is among a cohort of 85 men from the ages of 18 to 30 who were deemed high risk by the Department of Community Corrections.

Through biweekly video conferences, letters and emails, the re-entry guides get to know the men. Cainion said they build strong relationships and discuss what it will take to successfully return to the community and their families, setting goals along the way.

All of the re-entry guides have been incarcerated themselves. This helps them build trusting relationships with the men while they’re still in prison.

“We have these shared experiences, so I can really be empathetic,” Cainion said. 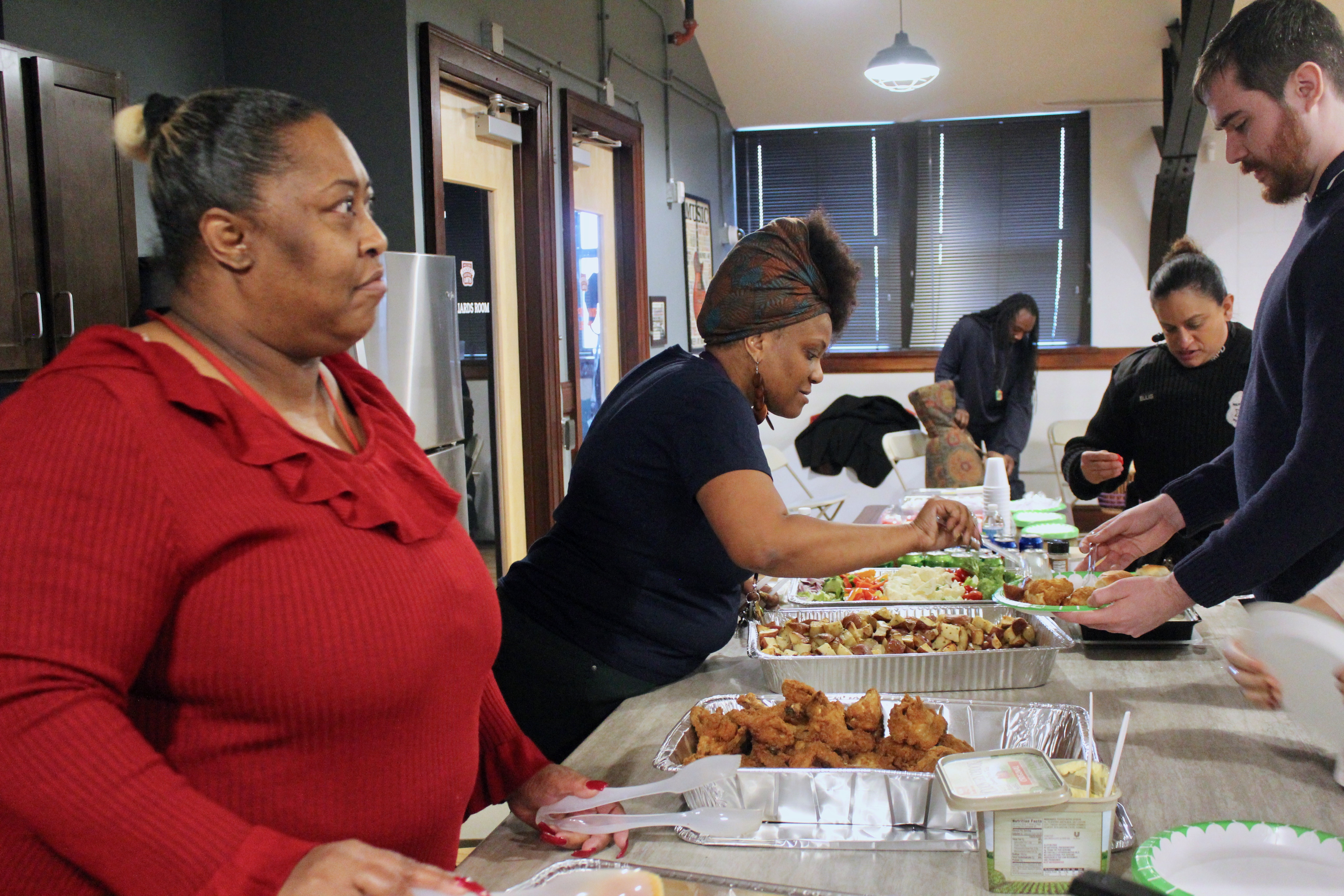 After the men return home, the guides provide practical support such as driving them to the DMV to get an ID or a driver’s license, connecting them to education or employment opportunities or going with them to sign up for public assistance. Cainion said the men can call the guides at any time if they are struggling to make ends meet or feeling pressures to fall back into an old lifestyle.

In addition to the re-entry guides, the other key piece of the Alma Brothers Smart Reentry program is the role of family support specialists.

Janet Robinson, a family support specialist, said time stops in a sense for men when they are in prison, while everything outside keeps moving. She said this can present challenges for everyone involved when someone returns home. In her role, Robinson works to provide support for the men’s families before release.

“When you build that relationship, you’re also healing that family, because you’re going to find that there are issues that the family outside may be concerned about regarding their loved one who is inside that may come up when they get back home,” she said. “These are things that need to be identified and worked out.”

Besides trying to heal relationships, support specialists work with families to plan and ensure the men have somewhere to stay when they come home. State recidivism data indicate that the first several months post-release are critical, as the highest number of re-offenses occur within the first three months.

Robinson said some men leave prison homeless, which is just one of the risks that heighten their chances of reoffending in the initial months post-release.

Reggie Moore, director of the City of Milwaukee Office of Violence Prevention, said that difficulty securing and maintaining employment with a criminal record is another risk that “could lead someone back to activity involving violence, as either a perpetrator or a victim.”

“The more we can support our returning residents with housing, mental health, employment and education, the more we set them and our communities up for success,” Moore said.

It’s too early to tell if the program is yielding positive results, but Stewart said he feels confident and ready to start his next chapter. “I’m turning a new leaf, so I’m feeling pretty positive these days,” he said.

“Having the Alma Center in my corner to hold me accountable has made a huge difference in my life,” he said.