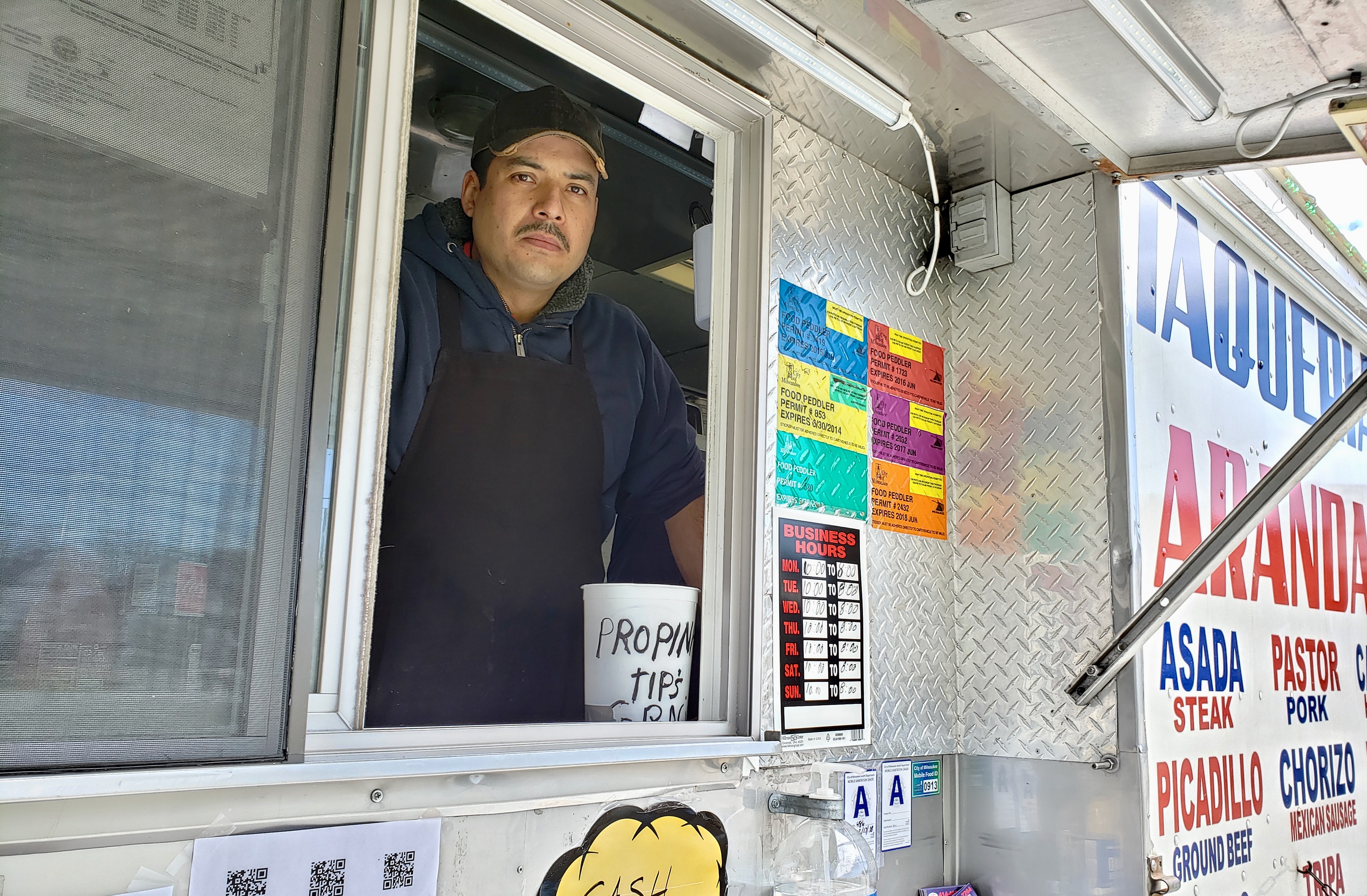 Editor’s note: This story has been updated with a comment from the Milwaukee Police Department.

The last-minute deal between Arandas taco truck owner Francisco Santos and Ald. Bob Donovan — which came after a proposal from the alderman to ban food trucks along a stretch of West National Avenue was vetoed by Mayor Tom Barrett in March — has failed. And his supporters are looking for another resolution.

“It was a bad deal that he was pressured to agree to without legal representation,” said Julio Guerrero, one of the organizers of a rally scheduled in the business owner’s support on Friday, May 3, at Velobahn Coffee, 3618 W. Pierce St. from 5-8 p.m.

According to Santos, he agreed to a low-cost lease for a vacant lot at 3528 W. National Ave., but only after pressure from Donovan’s office.

“They gave me a contract the day before and I asked for time to review it. I kept getting calls the next day and was being told that I didn’t want to cooperate so I signed it. I didn’t want any problems,” Santos said.

“I tried it for a few days and it wasn’t working, so I went back to my spot on West National,” he said.

After operating there for about 10 days, he said, police showed up and even stepped inside of his truck on April 5, although Santos wasn’t there at the time.

Officers told his employees they’d been getting complaints and that they were going to be making sure that the taco truck was moving from the parking spot every two hours, which was one of the original reasons Donovan gave for introducing the ban. By the time Santos arrived, the police were gone, but a traffic enforcement officer was marking the tires, a practice commonly used to monitor whether a vehicle is abiding by parking regulations.

The Milwaukee Police Department stated in an email to NNS that, because of past complaints, its License Investigation Unit made contact with Arandas and other food truck operators to discuss concerns from citizens and provide information about the safe operation of food trucks.

According to Patricia Doherty, long-time aide to Donovan, complaints about the truck started coming in soon after he started operating at his old location on West National. But, Donovan’s office had not reached out to any city department for enforcement since the council vote in March, although it did forward a complaint to several members of Barrett’s staff.

Santos is not prohibited from doing business on National Avenue, but is mandated by municipal ordinance to move his truck every two hours, which he said he had done since returning. After the incident involving MPD, and fearing more of what he felt was harassment, Santos moved his truck again to its current location on S. 22nd Street and West Greenfield, and has lost business.

“I’m not making money there. I’ve been struggling since the whole situation began,” Santos said.

The rally on Friday is to call attention to how the agreement was brokered, the alleged poor treatment of Santos by the City of Milwaukee, and how he has been hurt financially by the deal, according to Andrea Rodriguez, a member of Milwaukee’s Safety and Civic Commission and one of the rally organizers.

The group is also hoping to draw attention to larger issues such as the lack of an equitable permit policy for mobile food vendors and the lack of transparency on the process Donovan used to introduce a ban to the Common Council in the first place, Rodriguez said.

“He should have done a traffic survey and gone door-to-door and talked to people instead of just resorting to bullying tactics in seeking a ban. It’s an abuse of power,” she said.

According to Celia Benton, economic development director for Layton Boulevard West Neighbors, her organization was brought in at the last minute to help mediate the deal between Donovan and Santos, and also brought in Ryan Pattee, the owner of the parcel of land on West National Ave. The agreement they helped facilitate was only meant as a temporary solution until a sustainable plan was created.

“We didn’t want there to be a ban. We’re trying to make sure that everyone has a fair playing field and equitable access to business development in the area,” Benton said.

Benton said that her organization has been working to ensure that businesses along National Avenue and elsewhere in the neighborhood understand signage, city codes and other compliance measures that impact businesses, residents and others.

In the case of Santos, Benton said, none of the business owners she said she’d spoken to on West National wanted the taco truck to leave.

Doherty said in an email to NNS that the only thing Santos had to do was follow the parking regulations. If a vendor feels that the parking rules are unfair, they would need to propose a change to the council, which she believes would result in even stricter regulations for vendors, she wrote.

“[Common Council members] all work very hard to encourage small businesses to move into their districts and food vendors who can’t respectfully follow the parking rules and play fair when it comes to customer parking are not going to be viewed very favorably,” she added.

Rodriguez and Guerrero met with Barrett on May 2, to try to discuss a policy solution. One of the possibilities they discussed is adding a few lines to the existing ordinance to allow food truck vendors to park in one spot for more than two hours as long as they had support from residents and businesses in the area, Rodriguez said. She said that they were also working with the Southside Organizing Committee to get permission to operate long-term at Santos’ new location on West Greenfield Avenue.

Ultimately, according to Guerrero, the goal is to help prevent future situations like the one involving Santos.

“We’re looking for a collaborative solution and to help prevent business owners like Santos from getting pushed around,” Guerrero said.

As for Santos, all he wants to do is sell tacos.

“I just want to keep working, that’s all,” he said.