On July 17, 2019, the Housing Authority of the City of Milwaukee (HACM) welcomed nearly 300 people to its annual meeting to celebrate the ripples of hope created throughout its 75 years of providing high quality, affordable housing options and supportive services to Milwaukee families, seniors, disabled adults, and veterans.

The theme for the event was inspired by the words of Robert F. Kennedy:  “Each time a man stands up for an ideal, or acts to improve the lot of others, or strikes out against injustice, he sends forth a tiny ripple of hope, and crossing each other from a million different centers of energy and daring, those ripples build a current which can sweep down the mightiest walls of oppression and resistance.”

The program showcased HACM’s long-time commitment to working effectively with different levels of government, numerous community partners, and its diverse population of residents to preserve affordable housing and provide pathways to self-sufficiency.

The U.S. Department of Housing and Urban Development’s (HUD) Region V Administrator Joseph P. Galvan commended Mayor Tom Barrett, HACM’s Board of Commissioners, and attendees for their commitment to improving the quality of life for low-income individuals throughout Milwaukee. Galvan added that all of us have to work together, “to lift up those who are at most risk, those who are in most need because we are one community, we are one people.” 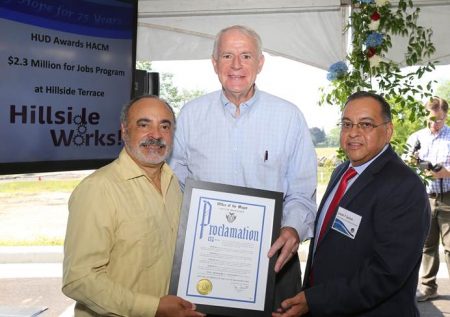 “The Housing Authority’s annual meeting, once again becomes a collective reflection of how it takes a village to band together to create positive change for the many. It provides us with a point of inflection in which we encourage others to join the band, to learn about the collective work, and look for ways to join the village in creating ripples of hope,” said HACM’s Secretary-Executive Director Tony Pérez.

Beginning with the construction of nearly 1,000 new apartment homes for veterans following World War II, HACM continued addressing Milwaukee’s affordable housing needs between 1950 and the early 1970s with the construction of several large developments for low-income families and 13 high-rise buildings around the city to house low-income seniors and persons with disabilities. In the 1970s HACM established its Section 8 Housing Voucher Program to de-concentrate poverty by offering rent assistance that could be used in the private rental market.

HACM currently provides over 11,000 low-income households with quality affordable housing options.  This includes over 3,000 seniors aged 62 and older; over 3,400 non-senior adults and children with disabilities; over 2,100 children less than 5 years old; and over 7,400 school-aged children, which is equivalent to almost 10% of the total enrolment of Milwaukee Public Schools.

During its 75 year history, it is estimated that HACM has provided nearly 170,000 people with housing stability.

HACM’s housing programs and its work in recent decades to revitalize its original housing stock has been an economic engine benefiting Milwaukee and Wisconsin.  Since 2004 alone, HACM has competed for and brought in more than $252 million in financing to sustain and revitalize the public housing developments that were built in the 1950s and 1960s.

A review of HACM’s economic impact by a third-party evaluator, Econsult Solutions, Inc., reported that HACM has a $116 million annual positive impact on the City of Milwaukee, including direct Payments in Lieu of Taxes (PILOT), and a $139 million annual impact on the State of Wisconsin.  This includes an employment impact of 670 jobs annually.

HACM has also partnered its housing with a wide array of programs and services to provide residents with pathways to good health and wellness, economic growth, and independence.  These programs have included:

“These programs and others, when combined with stable housing, truly have been the means to increased opportunity for many Milwaukeeans,” said HACM’s Choice Neighborhood Initiative Coordinator, Paul Williams. “They are the ripples that build a current that can sweep individuals, families, and communities through and beyond the oppression of poverty and disinvestment.”

Several beneficiaries of HACM programs were highlighted as “Ripples of Hope”:

HACM recognized several partners for helping the agency achieve its mission to foster strong, resilient, and inclusive communities. Each honoree received a commemorative Mova Globe sculpture signifying the care they have provided for their community. Honorees included:

HACM also unveiled its newest project, Victory Manor, a 60-unit veterans preference development with on-site supportive services provided by the Center for Veterans Issues, Ltd. Victory Manor is the first multi-family building to be completed as part of Phase II of the new Westlawn Gardens neighborhood.

The event concluded with Brig. General Robert A. Cocroft’s widow, Jacquie Cocroft, presenting the American flag to the color guard from American Legion Post 416 for a flag raising ceremony to honor the courage and sacrifice of those who secured freedom for all of us.

As we look to the future, we have a strengthened sense of commitment to creating ripples of hope by providing a foundation of stable housing and access to opportunities for our residents and our neighborhoods. 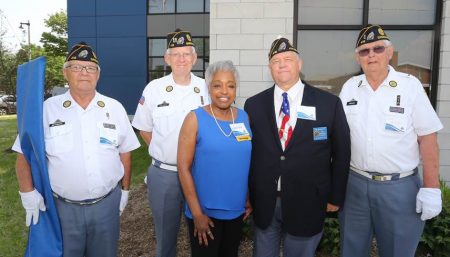 About the Housing Authority of the City of Milwaukee (HACM)
Founded in 1944, HACM provides high-quality affordable housing options to over 10,000 households in Milwaukee. HACM’s award-winning programs foster strong and inclusive communities that support self-sufficiency, good quality of life and the opportunity to thrive. Learn more at www.hacm.org.

About Housing Authority of the City of Milwaukee