Bridge the City co-creators Ben Rangel (left) and Kyle Hagge (center) interview Keith Stanley of the Near West Side Partners. (Photo provided by Bridge the City)

Kyle Hagge and Ben Rangel are tired of the same media narratives about Milwaukee and its communities of color.

“I feel defeated after I watch the news,” Hagge said.

So the civic-minded young men decided to do something about their frustrations. In 2017, they launched “Bridge the City,” a podcast that investigates politics, criminal and youth justice, elections and other systems that some traditional media outlets exploit but don’t always explore.

The podcast explores such topics as how to start a block club, voting in the school board and other elections, visiting a different part of the city or just calling your alderman.

Instead of just highlighting problems, however, the podcast focuses on solutions― and action.

“We end every episode with effective ways that people in our city can help make it a better place,” Hagge said. 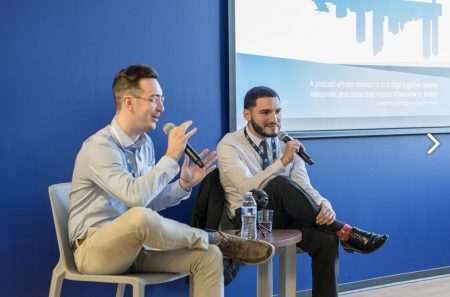 Rangel, a Racine native, and Hagge of Minnesota met four years ago as AmeriCorps participants with College Possible, a nonprofit focused on getting low-income students access to college. Both would go on to complete Marquette University’s Trinity Fellows graduate program, which develops leaders committed to social and economic justice.

Believing that one person can make a difference can be a hard sell, Rangel said.

“The status quo has not created an equitable society for those who are historically disadvantaged,” Rangel said. “Many people don’t believe the systems we have in place are capable of helping them, and I can’t blame them for thinking that.”

But Rangel, a third-generation Mexican American who grew up in a low-income household and was the first in his family to go to college, hopes he can help show them how. He also wants people to know that voting is only one way to make a difference.

“Oftentimes people think of voting as the only way to make change, but there are non-traditional ways to get involved,” Rangel said.

In fact, voting is just the beginning, said State Rep. Evan Goyke, D-Milwaukee, a recent guest on “Bridge the City.” He gave an example of how one community got fed up with a nuisance corner store. Residents spoke up, got organized and helped to create a law that holds stores accountable to residents or else the businesses could lose their license.

“People get too disillusioned and disheartened about what’s going on today in our society,” Goyke said. “People want to see change and be a part of it.”

Its staff has expanded to six members and they partner with social architecture firm NEWaukee to co-host political open-mics. The next one will likely take place in September.

Most important, though, according to Hagge, is that members of the team believe they are inspiring people to help make a difference.

“Yes, Milwaukee has its issues, but there are many people doing great things here and others who want to help,” Hagge said. “People are more than willing to meet you there if they know how.”

You can catch the “Bridge the City” podcast on all major podcasting platforms, including Spotify and iTunes.