You are here: Home / Home / Carousel / ‘You gotta start somewhere:’ Residents speak out after listening session with Police Chief Alfonso Morales
Share this... 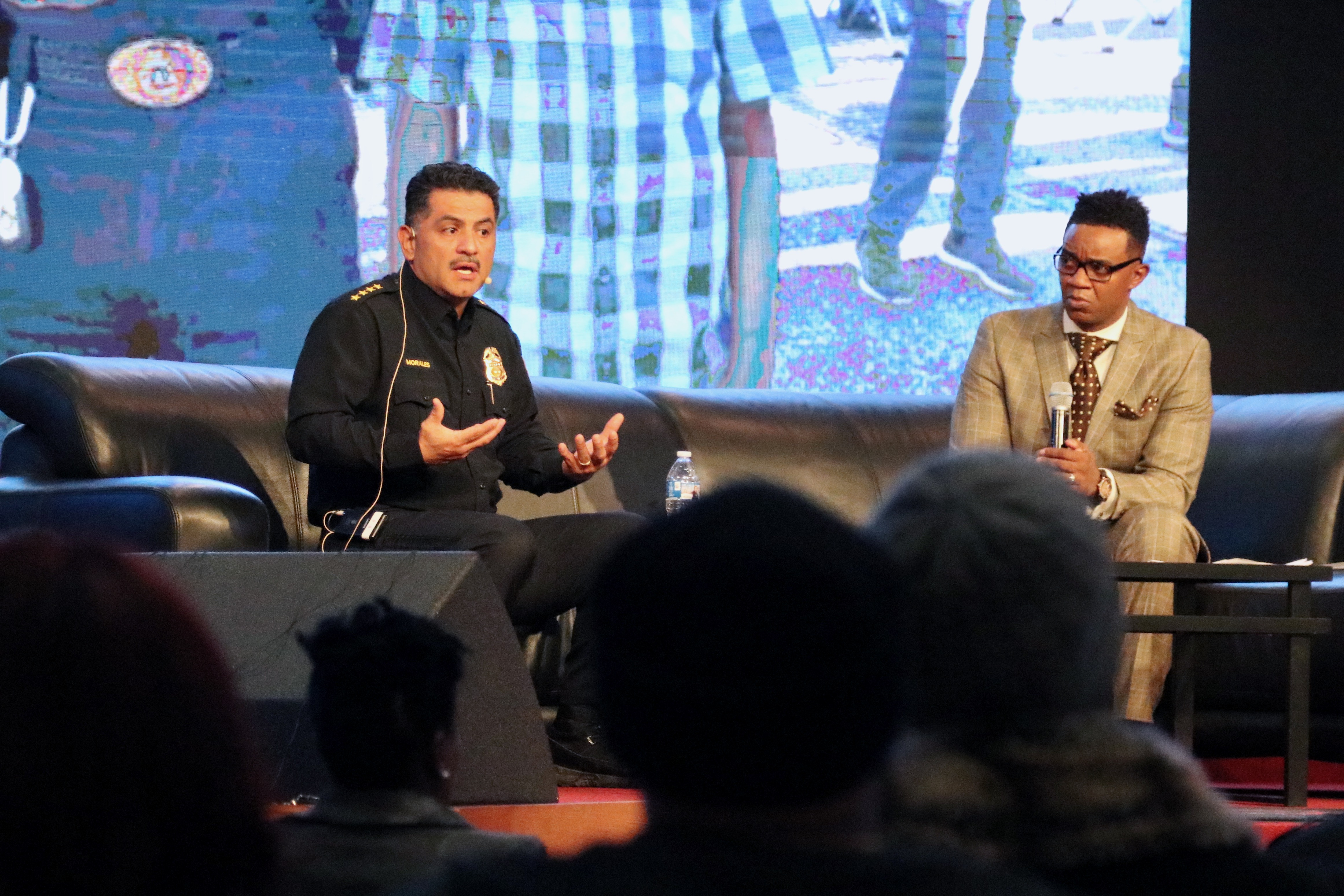 Chief Alfonso Morales addresses residents Wednesday during his first listening session with the community. A second session will be held from 5:30 p.m. to 7:30 p.m. Monday, Jan. 27at UMOS, 2701 S. Chase Ave. (Photo by Sam Woods)

Here’s what some community residents had to say during Wednesday’s listening session:

What brought you here?

“To hear what the chief had to say. I know the police are doing their job. You’ve got those that are not of course, but a majority of the police got a job to do, and I think they do it, personally.”

“I also wanted to see what people here suggest for the North Side. Sometimes the police take forever to come on the North Side, and that’s the truth unless there’s real violence like shootings.”

“I heard about this last minute, and I wanted to ask a question rooted in an actual study and the movement of the Black Panther Party, and I’m upset that I didn’t get to ask my question.”

“I came to see what this was all about, and what the chief had to say. I didn’t think it was going to go the way it went. I thought it would be more people trying to solve an issue than trying to place blame.”

“A lot of the questions came in a question form but were really placing blame on Chief Morales. It seems . . . they had an issue with him being in that position rather than focusing on how to solve problems with him already in that position.”

“One reason I came out was because the public not being able to participate in picking Chief Morales was a slap in the face, especially after Chief Flynn.”

“It was dog-and-pony. It was a PR show, rather than a substantive exchange of ideas and holding people accountable. There were good stats, but there should’ve been more of an exchange of ideas between the public and the chief.”

“I wanted to get a better understanding of where our community is, where we can go together to move forward and make change and how we can build better connections with police to give people here a better way of life.”

“I wanted to come out to see what the chief had to say. I’ve been involved in the community for years. I’m a retired police officer, and even now I’m a chaplain for the community. When there’s a homicide, I come out to support the victim.”

Did you ask a question?

Villarreal: “No, but I wanted to ask a question about what [Chief Morales] is actively doing to address his own personal biases and uphold community values and community control of the police? I also wanted to offer a study by Sandra Bass for him to review, because he has said that in 2021, he plans to re-evaluate the police department and educate on cultural competency and diversity.”

Alford: “No, but my question would’ve been: Regarding this last budget passed with 47% of the city’s budget going to police, my question to Chief Morales would’ve been that since budgets are moral documents, does he think this budget is moral, and why?”

West: “Yes. My question was: Can we find a way to supply home security cameras to anyone who wants them?” Chief Morales’ answer was that the police are not allowed to promote a particular branded product, but it is a great idea to have one. They are very productive and helpful to law enforcement.

Do you have any possible solutions to police-community relations?

Minor: “This is one of them. Get the community together. Get these young people off the street. It might not feel like much, but you gotta start somewhere.”

Alford: “When I imagine solutions, I see community policing with police-community liaisons, safe zones, police officers living in the city, the funding for police not going to pensions and a more inclusive practice of picking a police chief. I would also like to see the Fire and Police Commission funded more, as it is the civilian body that governs the police.”

“The irony is, this current chief could’ve wrote his own ticket by doing this kind of thing before becoming chief. With more of these town halls, maybe he could’ve got some consensus.”