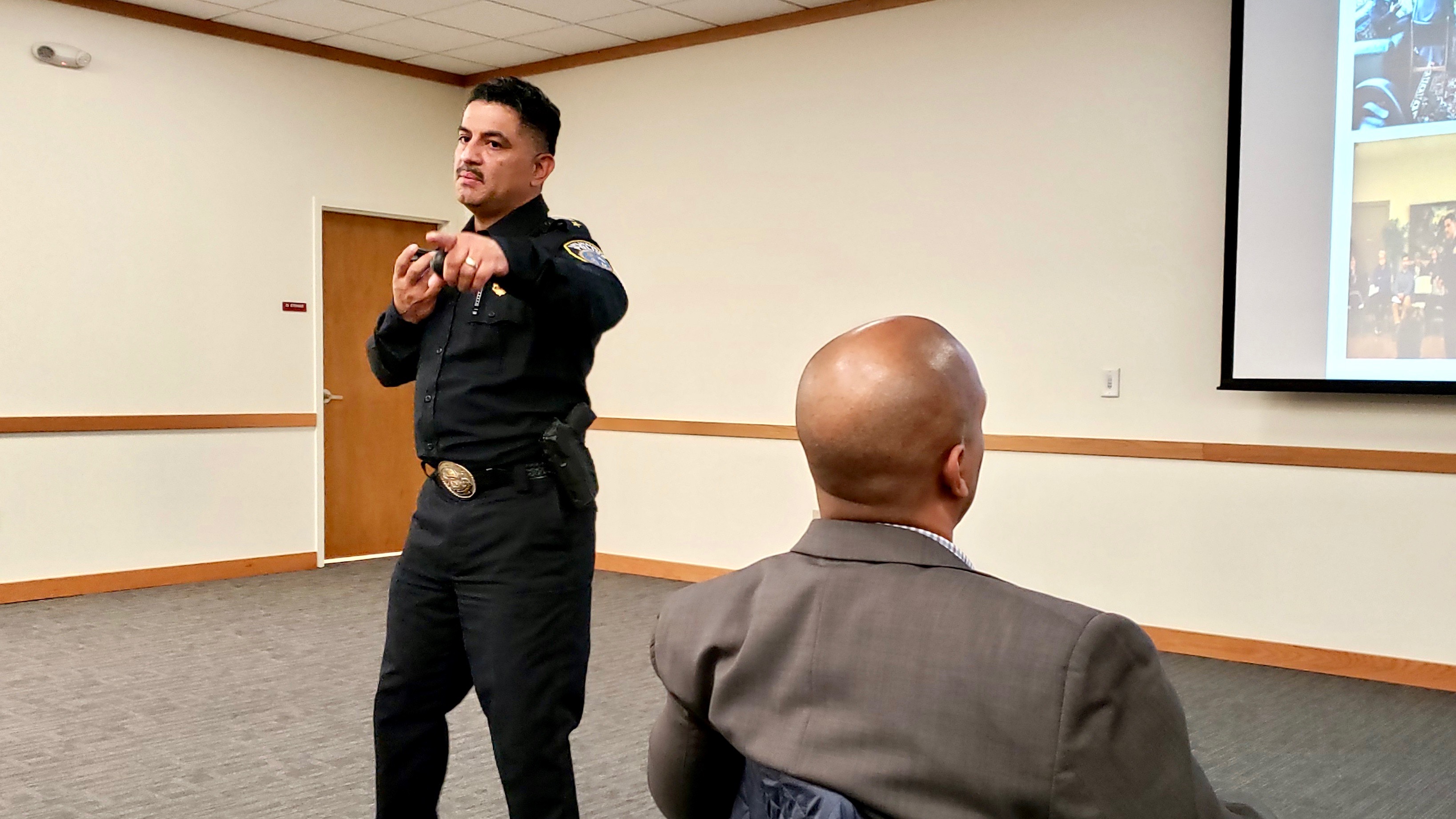 “I didn’t leak any video and I’m looking into it,” said Milwaukee Police Department Chief Alfonso Morales during a community listening session this week at UMOS. (Photo by Edgar Mendez)

Editor’s note: This story has been updated to provide more context regarding the Milwaukee Police Department’s relationship with the city’s Office of Violence Prevention.

The Milwaukee Fire and Police Commission is conducting a review to determine whether a full investigation should be ordered after the release of a video featuring the questioning of a prominent Milwaukee developer by the Milwaukee Police Department.

The video, which some allege was leaked by the MPD, was part of an investigation into an alleged sexual assault.

The video shows Kalan Haywood Sr., who was accompanied by Steven DeVougas, a lawyer and chairman of the commission, being questioned by police.  Haywood is the founder of the Haywood Group, a prominent real estate development, investment and consulting firm.

Some have called the leak of the video a political maneuver to push forward the confirmation of Morales in late December. Others have accused DeVougas of violating ethics guidelines in support of a client. The leak also was heavily criticized by several Common Council members during a recent meeting of the Steering and Rules Committee.

If a full investigation is ordered, it would be conducted by an outside party, Aldrete said. No timeline for the decision was provided nor was more information given on whether or not a complaint prompted the commission’s review.

The announcement came after community members grilled Morales about the video.

The two-hour meeting teetered back and forth between criticism of Morales and the MPD and praise for the department.

Like the listening session last week at Unity Gospel House of Prayer on the North Side, the South Side meeting kicked off with a presentation by Morales that touted reduced homicides and robberies in addition to declines in several other categories of violent and nonviolent crimes from 2017 to 2019. It also included several personal stories about community outreach that Morales, a Milwaukee native, has conducted.

Several attendees pointed out what seems to be a frayed relationship between the police department and several local organizations, including the immigrant rights group, Voces De La Frontera.

“What strategies are in place to ensure we don’t criminalize and harm specific communities,” asked Voces De La Frontera organizer Giselle Vera, whose uncle Erick Gamboa Chay was detained in an Immigration and Customs Enforcement raid in Milwaukee in 2018. Gamboa was released after being held for six months, according to a Wisconsin Watch story. Vera questioned Morales specifically about Relentless Pursuit a federal initiative launched in Milwaukee and six other cities in December.

Morales, flanked by MPD executive and command staff, said MPD officials don’t make laws but are obliged to enforce them. He said some of the questions from the audience were politically motivated.

“We can’t allow organizations to politicize the role of the police department,” he said, drawing  cheers from many in the overflow crowd of more than 150.

A rift with Office of Violence Prevention?

When asked by an attendee whether he thought the Office of Violence Prevention had contributed to reducing violence in the city and if he intended supporting its efforts going forward, Morales responded by saying, “There is no one organization that can take credit.”

When asked again about the group’s efforts, Morales said he didn’t have any data to confirm whether or not the office had contributed to the drop in violence in the city.

Later in the meeting when asked again whether MPD would work with the office, Morales said it was the Office of Violence Prevention that had backed away.

“Don’t know why they won’t work with us. It’s on them,” said Morales, who added that the office still works with representatives at three of the MPD’s seven districts.

In an email to NNS, Reggie Moore, director of the Office of Violence Prevention, did not  respond directly to Morales’ comments. He did, however, mention a community meeting that took place Tuesday, Jan. 28 at Ascension St. Joseph Hospital in which assault data from District 7 was to be reviewed.

When asked whether District 7 representatives would be in attendance, Moore wrote: “They have always been invited.”

Here are additional takeaways  from the meeting:

● Morales said police staffing levels will remain stable during the Democratic National Convention in July as officers will be working and supported by law enforcement from outside the city and state.

● There could possibly be another listening session on the North Side. The meeting would be held in response to citizen complaints about the meeting location, the moderator and about limited opportunities to ask the chief questions.

Voices from the community

Here’s what some community residents had to say about Monday’s listening session:

What brought you here?

“I am very concerned about how things are handled in the City of Milwaukee. I was at a different meeting, and the topic of Chief Morales came up and someone reminded me that this meeting was tonight and I thought I’d come.”

Marty Calderon, grew up on the South Side:

“I thought this meeting would be important to see what’s going on. That’s what these meetings are for. Some felt they weren’t getting fair answers. I try to understand the different things that are happening if I don’t see it, so I respect the views of people here.”

“I missed the North Side meeting, but this whole city is my neighborhood. So I heard there was one here and I came to speak to the chief.”

Did you ask a question?

Maglio: “I don’t have any questions at all. There is one topic that came up that is concerning to me, and that is a sexual assault case that was not handled properly. I have a lot of concern about how sexual assault is handled.”

Calderon: “Yes, the question was if there would be more beat cops this summer, when it starts getting warmer out. [Chief Morales] said yes there would be in some areas, but other areas already have enough personnel.”

Green: “Yes, my question was: Who do you work for? [Chief Morales] said he worked for ‘the City of Milwaukee.’ I think though that anyone who works for the city actually works for the citizens who pay him. I was a firefighter, and I always knew that I was working for [Milwaukee residents]. I think that they don’t get that.”

Do you have any possible solutions to police-community relations?

Maglio: “We definitely need more conversations about the divisions and historical wounds. That is a lot to put on Chief Morales because he inherited a difficult past, but it needs to happen. Monthly conversations would be a minimum, where the conversations can be addressed more in-depth. It’s difficult to air people’s deep concerns in a setting like this. We have a lot of wounds to address.”

Calderon: “[The police and community] need to listen to one another and build relationships with one another. I understand we’re not all going to get along or like what’s being said.”

“I’ve done a lot of gang outreach on the South Side, so some officers have thought I was gangbanging too, which wasn’t true. But then we had captains who were supportive of what we were doing. So you’re going to have [miscommunication] sometimes, but I think we need to respect one another and agree to disagree sometimes.”

Green: “I get that they want collaboration, but it’s hard for two entities to collaborate when they don’t speak. Recently in my neighborhood, a young man walked by and littered. I had talked to him a couple times before, so when I said something to him, he immediately said ‘my bad’ and picked it up. Had I not spoken to him before I think his response would’ve been ‘who are you?’ So I get what they’re trying to do, but you’re never going to get the police and community to work together on the big things if they can’t work together on the little things.”

“They want collaboration, but they drive through neighborhoods and they don’t even speak. You could say that goes both ways, and that citizens don’t speak to them. But do you know how far something as simple as a wave can go?”

In case you missed it: ‘What are we waiting for?’ Service is a family affair for Haywoods