You are here: Home / Home / Carousel / ‘We expect, encounter and survive in crisis situations all the time’: How Milwaukee grassroots leaders mobilized to help voters on Election Day
Share this... 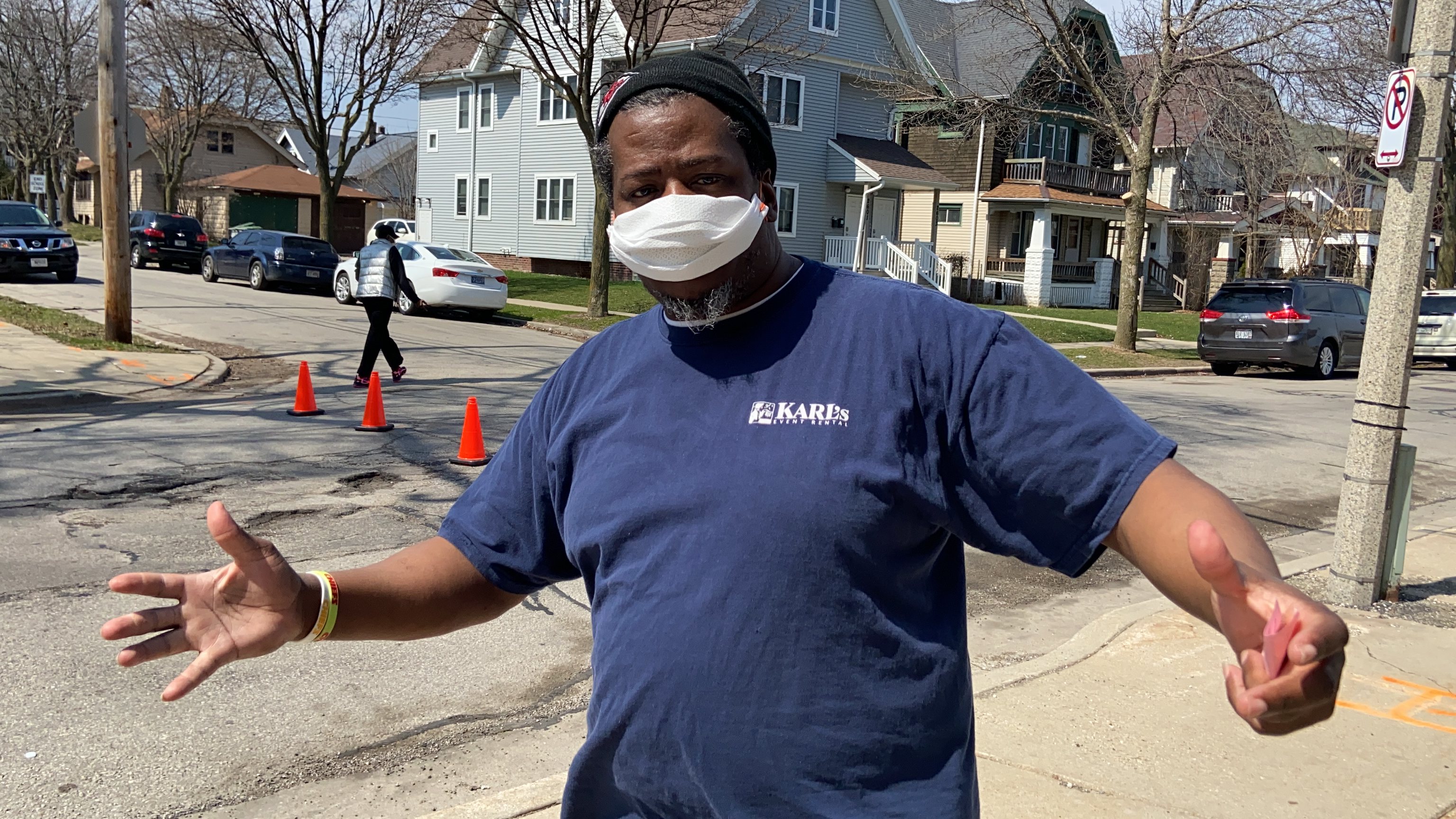 Ashley Lee woke up Election Day to social media posts from friends worried they would miss the 8 p.m. deadline to return their absentee ballots.

Recognizing the importance of an historic election where every vote could matter, she immediately jumped into action on Facebook, offering to pick up ballots for anyone who needed help.

“You know people are going to be in danger and going to lose their vote if you don’t do something,” said Lee, a Sherman Park resident and the executive director of Public Allies, a social justice organization that trains young leaders.

Lee was among the community organizers who worked to ensure residents remained safe and had their voices heard Tuesday.

But Republican lawmakers in Madison rejected the order and took the issue to the Wisconsin Supreme Court, which reinstated Tuesday’s elections.

Then the U.S. Supreme Court got into the act, ruling voters would have to mail back their absentee ballots by Election Day, go to the polls that day or forfeit their opportunity to vote.

With only five voting centers open instead of the usual 180 sites, voters were forced to choose between possibly risking their health during a pandemic or forfeiting a constitutional right. 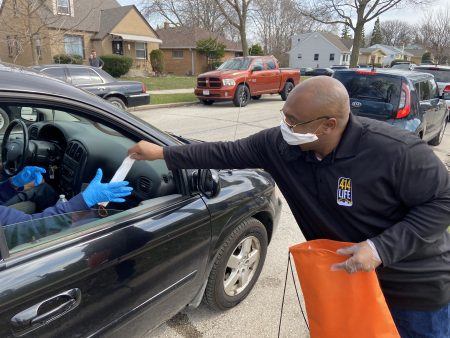 The masks were provided by the Medical College of Wisconsin and Unite MKE from materials donated by Rebel Converting, a Saukville company that produces hospital disinfectant wipes. (Photo provided by Reggie Moore, City of Milwaukee Office of Violence Prevention)

Throughout the day, Lee’s team of 10 women picked up absentee ballots from pregnant mothers, elderly residents and immunocompromised individuals stuck at home. They also came to the aid of a health care worker on his way to his shift at a hospital. Volunteers then brought the ballots to drop-off sites.

The team was able to reach 80 households and picked up about 100 absentee ballots.

(As of April 9, 74,699 absentee ballots have been returned out of the 96,712 issued, according to the Milwaukee Elections Commission.)

“It was inspiring and frustrating watching people hold together a broken system,” Lee said. “This is how deeply flawed the system is.”

Even though members of the community stepped up, Lee said their good deeds cannot overshadow the systemic racism and voter suppression that occurred Tuesday.

“The nature of our work means that we expect, encounter and survive in crisis situations all the time,” Lee said. “People can respond quickly and organize people and be thoughtful and get things translated and get messages sent out because they are accustomed to bad decisions being made that leave our people in the lurch.”

Volunteers and board members from Leaders Igniting Transformation, or LIT, a youth-focused civic engagement and advocacy organization, also worked throughout Election Day to relay information to residents.

The organization, however, did not encourage residents to risk their health and go to the polls.

“This was no longer an election but an execution of communities of color by sending them to the polls,” said Dakota Hall, the organization’s founder. The organization had been petitioning Evers to postpone the election since March 17. Hall said for future elections, the group will encourage voters to turn in their absentee ballots as soon as possible. 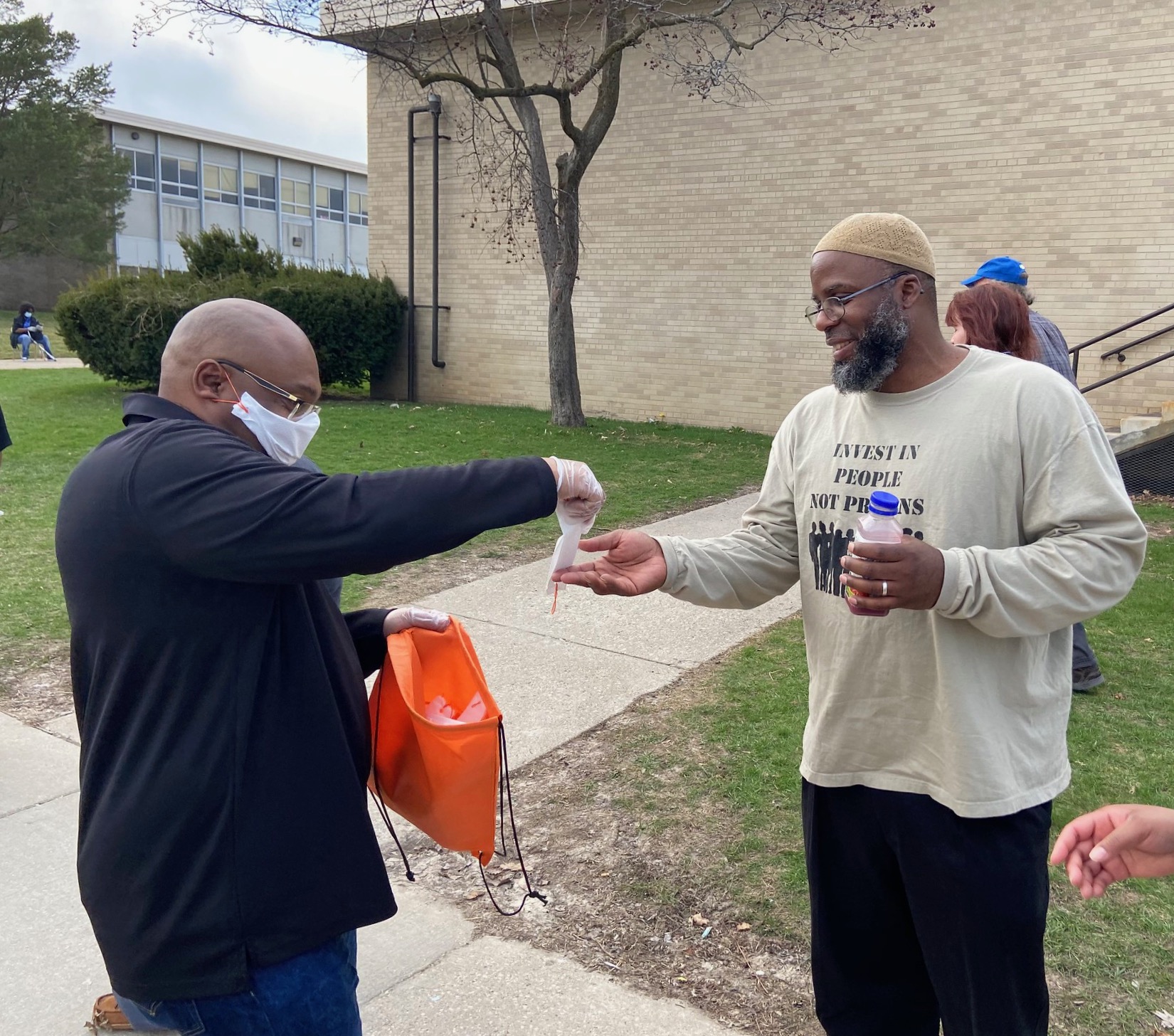 Safety also remained on the mind of Hamid Abd-Al-Jabbar, who started his day around noon at Marshall High School.

He is a violence interrupter and outreach worker at 414 Life, a violence-prevention program based in Milwaukee neighborhoods and hospitals.

Abd-Al-Jabbar, along with staff from 414 Life and the city Office of Violence Prevention, helped distribute over 1,500 masks. The masks came from the Medical College of Wisconsin and Unite MKE, a group that provides health and social services to at-risk populations in Milwaukee. Rebel Converting, a Saukville company that produces hospital disinfectant wipes, donated materials for the two organizations to make and distribute.

“The voting process was a whole different animal,” Abd-Al-Jabbar said. Because of long lines, he said, it was difficult for individuals to maintain the social distance of 6 feet recommended by the Centers for Disease Control and Prevention.

While distributing masks at Washington High School in the evening, Abd-Al-Jabbar saw some poll workers trying to close lines earlier than the official 8 p.m. cutoff. Some voters started to get frustrated, and he stepped in with co-workers to help calm them.

Reggie Moore, the director of the Office of Violence Prevention, which partners with 414 Life, said Tuesday’s election serves as a reminder of ongoing disparities that impact African Americans in Milwaukee and why the fight against voter disenfranchisement must be a priority.

“Residents of Milwaukee were put in a perilous position where their health was potentially compromised,” he said. “When I think of the 1,500 individuals who received those masks, I hope this has literally saved people from getting sick or dying of this virus.”