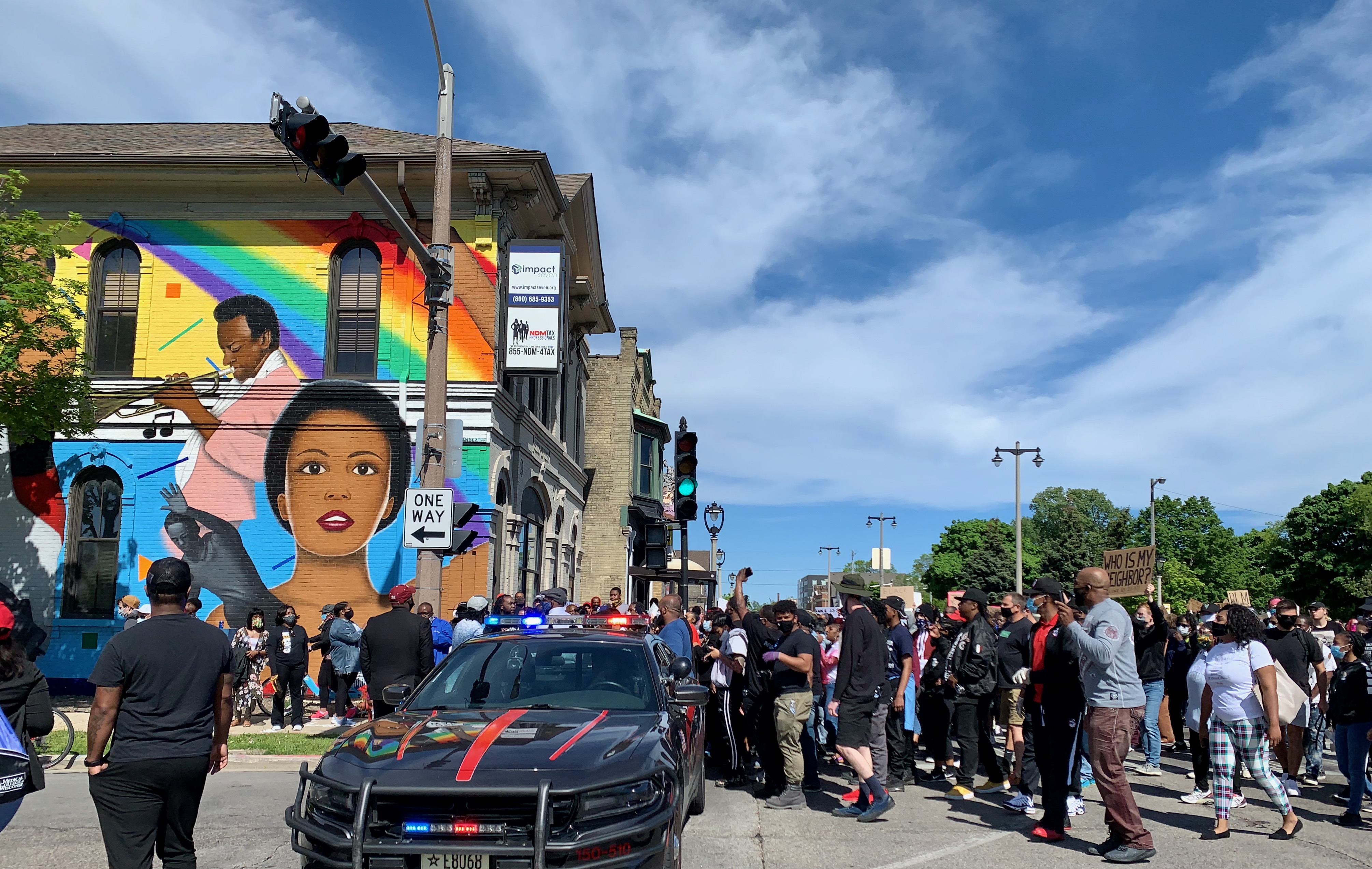 A protest passes Reynaldo Hernandez’s “Celebrate the Arts” mural on May 31, 2020. (Photo by Allison Dikanovic)

On Friday, during an afternoon press conference you chided protesters in Milwaukee by saying:

“Something happens in another city, another state and it’s very, very easy to jump on the bandwagon and say Milwaukee can do better. Shame on those. That’s an easy narrative. It’s a very easy narrative to jump on.”

Chief, you are right that it was something in another city, in a neighboring state, that was the immediate cause of last week’s protests. But the people you are sworn to protect in Milwaukee did not take to the streets only to protest the Minneapolis Police Department. Yes, George Floyd’s name was often said in response to chants of, “Say his name” and Breonna Taylor’s name was often said in response to, “Say her name” — and they were both killed by police in other states.

But if you read the signs many were carrying, or if you had reviewed the record of your own department, you would know that the names and lives of Joel, Sylville, Dontre, Derek, Tony, Frank and Ernest were also on our minds, in our hearts and on our lips.

Those seven names are only a partial list of those who have died or been seriously injured while in the custody — or sometimes literally in the hands — of the Milwaukee Police Department.

And after a week of protests in our city, we are not just protesting the past: we are protesting the present and your police department’s response to these protests. Had you been present at Friday’s hearing of the Public Safety and Health Committee instead of at a press conference, you would have known that it is not “another city, another state” that is at stake here.

Your very next comment, after calling our protests a “bandwagon” at that press conference, was this:

“Two thousand years ago, an angry mob came before people to say, ‘Crucify that man.’ That man being Jesus Christ. What are angry mobs doing today? We say we’re civilized, but are we really? Let’s think about that.”

Two minutes later, when asked to clarify who you meant was being crucified today, you replied:

There are many angry people right now, but that is not what they want. Listen to the demands. Many of them were offered at the hearing you missed, and instead were communicated directly to your Assistant Chief Michael Brunson and your Chief of Staff Nick DeSiato. We want a police force that de-escalates, that respects and that humanizes.

In our nation today, there are too many martyrs. There is too much violence and too much death. This was true before these protests started and it is still true.

There are many names to say.

They are Milwaukee Police officers who have died in the line of duty in the past three decades.

We say all of these names, we celebrate their lives and we mourn their violent deaths.

The current historical moment — in Milwaukee and throughout the nation — is not a competition to claim the right to religious analogies. It is a demand for justice, something for which too many have already died. It is a demand for significant and immediate structural reform of all police departments — including ours — to make sure George Floyd’s name is the last.

Let’s stop dying for justice and start achieving it.

About Members of Milwaukee's Common Council