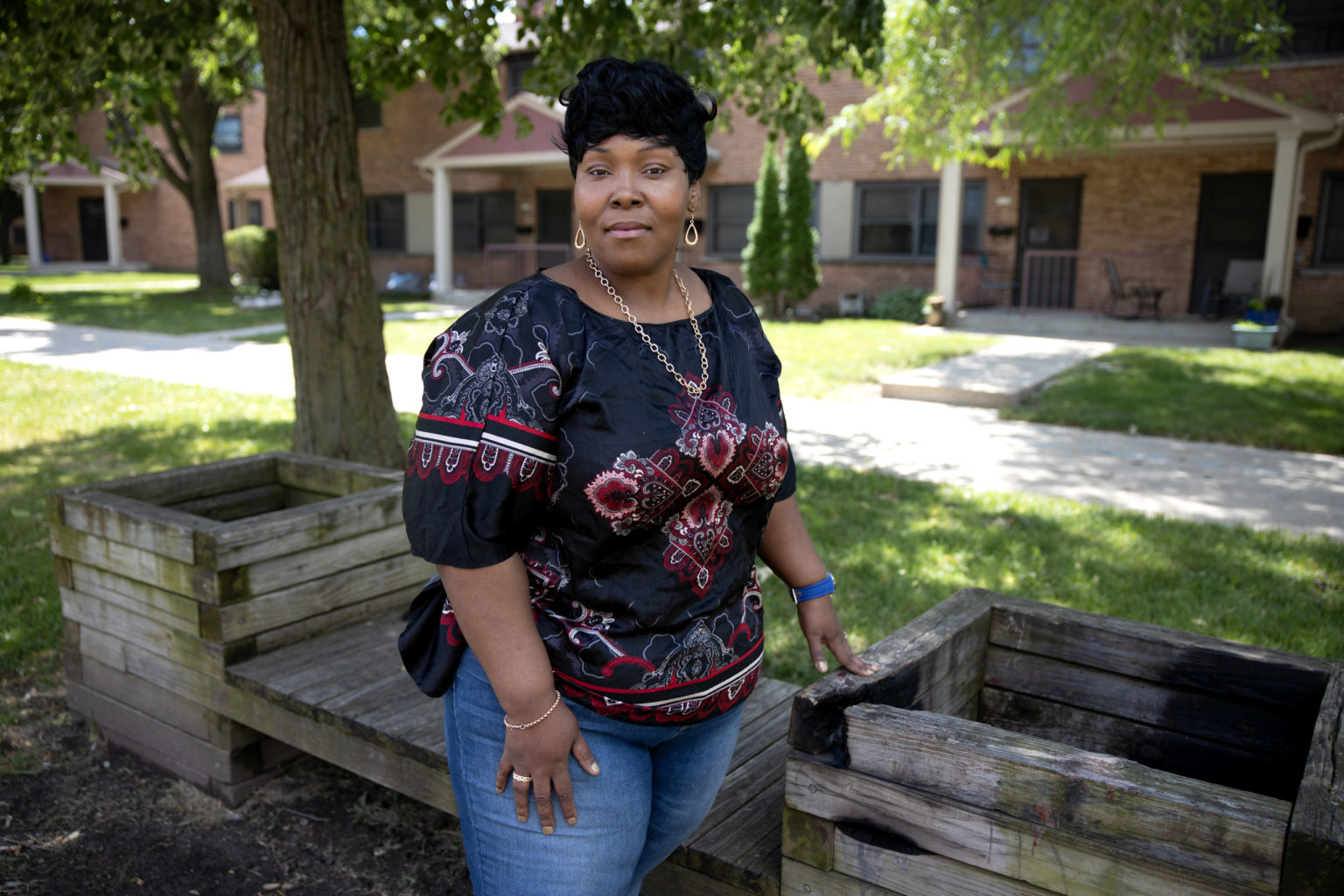 Alfreida Casterlow of Milwaukee lost her job in April with Northwestern Mutual, which she held through the staffing agency Kforce. She immediately applied for unemployment but did not receive any benefits until July 7. She said her unemployment insurance checks stopped on Aug. 1 due to a bureaucratic problem, and state officials told her she must reapply for benefits. She said the temporary benefits helped, but she will again fall behind on bills if she is left waiting too long to again be approved. (Photo provided by Coburn Dukehart/Wisconsin Watch)

Kristina Smith lost her job in the printing industry and has been waiting for nearly two months to hear back from the state on her unemployment case.

If not for the weekly $600 federal unemployment supplement her fiancé, a die cutter, received after becoming unemployed, their household of six would have been in dire straits months ago.

That benefit, part of the federal CARES Act, has expired and talks in Washington to renew it came to an impasse over the weekend. President Donald Trump on Saturday signed an executive order continuing the benefits at a lower level — $400 per week, including $100 to be provided by the states.

But Democrats and Republicans were wrangling over the order Monday, with some critics calling it legally dubious.

All this leaves Smith and countless others wondering how they will survive.

“Not enough money for food or for rent. I mean, this is crazy,” said the Milwaukee resident. She’s looking for work while worrying about contracting the novel coronavirus.

According to data collected by Citizen Action of Wisconsin, a member-based organization that focuses on social, economic and environmental justice issues, an unemployed full-time worker who normally makes $10 an hour will now receive a $156 weekly benefit from the state, a 79 percent reduction in spending potential from when the federal supplemental benefit was provided.

Full-time workers who normally earn $20 or more per hour will see their weekly income drop from $970 to $370 per week. But if Trump’s order goes into effect, and Wisconsin provides the $100, that amount would be $770.

The larger reduction would cause a wave of evictions, foreclosures and families being unable to put food on the table, said Robert Kraig, executive director of Citizen Action of Wisconsin.

“We passed relief that needed to go further. This is an ongoing financial catastrophe,” said Kraig, who, in the days before Trump’s order, criticized Republican legislators for not extending the benefit.

The unemployment benefit for Wisconsin is 40 percent of a worker’s average wage, with a cap of $370. For those who were eligible, the federal supplement added $600 to their payment.

“That extra $600 is the difference between stable housing and running the risk of being put out in the street,” she said before Trump issued his order.

Some Milwaukee residents have been in crisis mode ever since a state moratorium against evictions expired in late May. Emergency rental assistance programs in the county are facing severe backlogs as they try to meet demand.

Trump’s order asked federal officials to “consider” reinstating a moratorium on evictions, but no action was taken.

“His executive order offers merely false hope and risks increased confusion and chaos at a time when renters need assurance that they will not be kicked out of their homes during a pandemic,” Diane Yentel, president of National Low Income Housing Coalition, told USA Today.

The loss of the federal unemployment benefit hurts those who are part of workshare programs. It also affects those who still are employed but have had their hours reduced and were eligible to receive the additional $600.

“They would still see about a 50 percent reduction in the spending that they otherwise would be able to do right now,” said Kevin Kane, a staff researcher for Citizen Action of Wisconsin, said before Trump issued his order.

That’s the case for Crystal Aguilar, who works as a server but saw her hours cut when the pandemic started. She said her weekly income was more than halved.

The benefit “allowed me to make what I would have normally made,” Aguilar said. “Now that it has ended, it’s hard coming up with enough to make ends meet, and I’m having to look for a second job.”

Local businesses will be drastically hurt by the income that is no longer in the economy, Kraig said.

“You can create another secondary wave of unemployment,” he said.

In fact, he estimated Wisconsin would lose 65,000 jobs, with more than 14,000 of those based in Milwaukee, with the benefits ended. More than $3 billion would be removed from the statewide economy, including $975 million from Milwaukee-Waukesha metropolitan statistical area, the research from Citizen Action of Wisconsin found.

“We’re going to have record amounts of homelessness, spurred by evictions and foreclosures . . . a lot more people literally in modern soup lines. It’s going to have a devastating impact,” Kraig said.

Congress and the White House were still at odds Monday over the effects of Trump’s order, with Democrats still hoping to reinstate the $600 federal supplement and Republicans looking at a smaller payout as part of a new coronavirus relief measure.

The Washington Post reported Monday that Trump was pressuring Democrats to resume talks with Republicans on the stalled coronavirus relief bill.

Smith said she has hope but little confidence that something will happen soon.

“I honestly don’t think that help will come in time,” she said. “So yeah, we’re basically screwed.”