You are here: Home / Home / Carousel / Milwaukee’s homeless providers brace for the worst as the coronavirus creates more challenges
Share this... 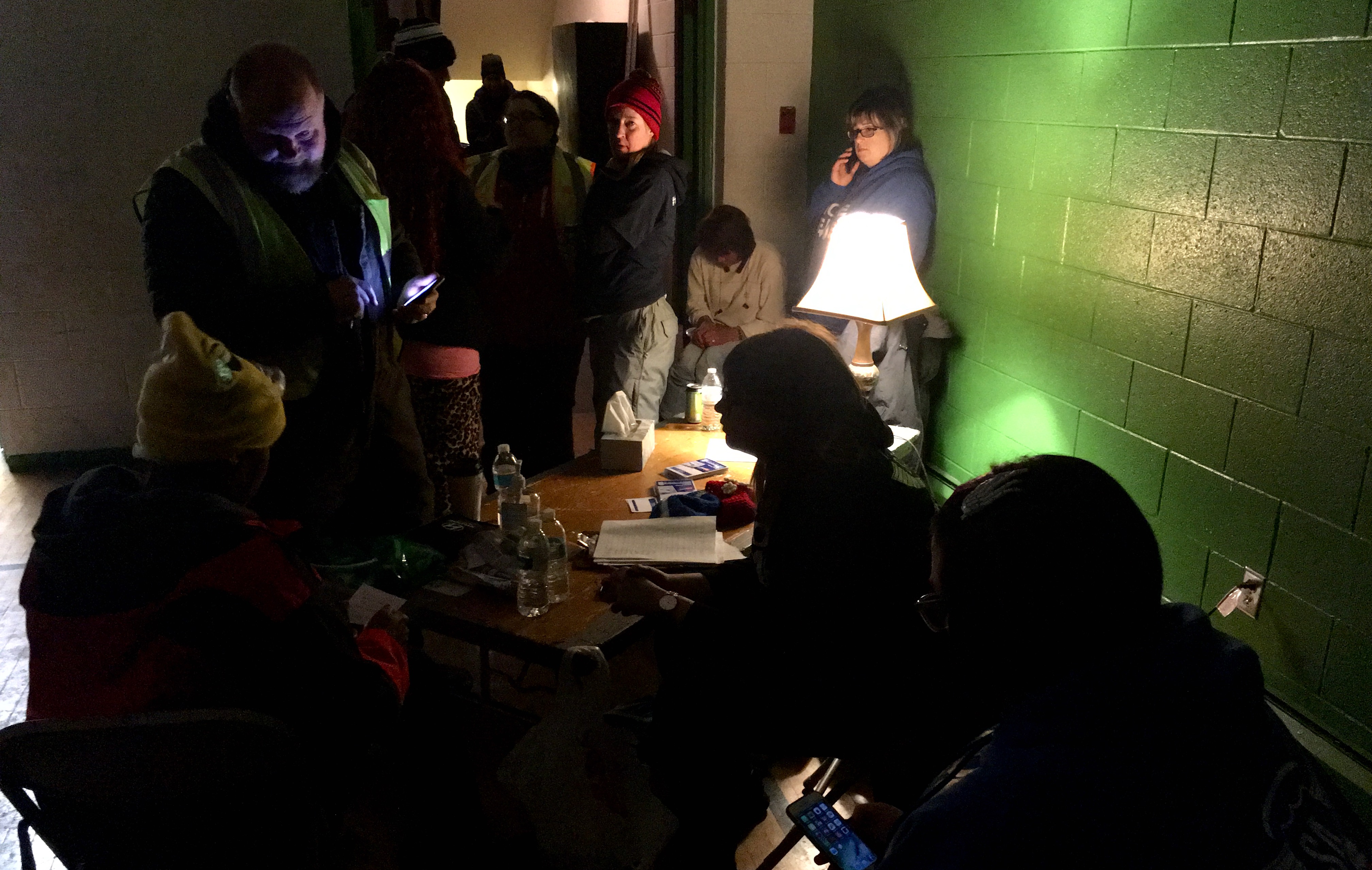 With the pandemic in full force and evictions rising, homeless care providers are preparing for the worst. Volunteers at the Street Angels Milwaukee Outreach emergency shelter at Ascension Lutheran Church speak with a guest in 2018. (File photo by Elliot Hughes)

Despite efforts by shelters, the city and the county, Shelly Sarasin fears the worst is yet to come for Milwaukee’s homeless population.

Sarasin is the co-executive director of Street Angels, a nonprofit that helps feed, shelter and advocate for those facing homelessness. She said she’s noticed an increase in those living outside in comparison with earlier years, though definitive numbers are hard to come by.

Shelters, along with city and county leaders have been in constant communication about the state of homelessness during the COVID-19 pandemic — but their efforts may not be enough, leaders told NNS.

From having to require a 72-hour quarantine, where people have to isolate within a shelter, to ensuring people are social distancing, Milwaukee’s homeless shelters face serious challenges from the coronavirus.

During the beginning of the pandemic, many shelters suspended in-person services for residential and outpatient programs and limited the number of people shelters could house, effectively reducing their capacity.

A rise in homelessness?

Now, shelters are seeing “an uptick in individuals living outside,” said Ashley Wisnefske, housing and outreach manager at Outreach Community Health Centers. “Some shelters aren’t taking new people, and even for those that are, the influx is much slower as people have to quarantine before being allowed into a center.”

Early this year, places like Clare Hall, on the grounds of the St. Francis de Sales Seminary, opened to provide temporary shelter for people, as did many motels, to flatten the increase of people living on the street.

Nancy Esteves, homeless management information system manager for the Institute for Community Alliances, said the decrease in shelter capacity makes it look like the city has a new or worsening homeless population. But that’s not the case, she said.

“We had about a 30 to 40 percent drop in residents,” said Aurelia Brown, director of Joy House at Milwaukee Rescue Mission. “Because we have a decent sized space, we are still able to serve about 60 percent of the people we usually do.”

According to 2020 Point-in-Time Count, there were 970 people without homes as of January. Once the pandemic hit in March and local shelters cut back to 50 percent to 60 percent of their capacities, city and county officials came together to provide temporary housing for about 177 people, according to data provided by the Institute for Community Alliances. This number does not include those housed at Clare Hall.

A Point-In-Time, or PIT, count is a statistically reliable, unduplicated count of people experiencing homelessness during a designated one-night period. Wisconsin conducts this count twice per year.

Is it better or worse?

“While that is a smaller number of people served, when you count the around 150 people the city has housed plus those in Clare Hall, which has a capacity for 80, plus those in areas of the city that we don’t serve, this issue looks worse.”

She said that winter is always hard for those living on the streets, but with the ongoing pandemic and evictions on the rise, this year could be worse than usual.

As leaders prepare for the expected next wave of COVID-19, homeless care providers are focused on ensuring their clients aren’t left behind.

“We don’t want to open another opportunity for COVID-19 to hurt this population, and people will not just be left in the wind when the pandemic is over,” Sarasin said.

Where you can find help