You are here: Home / Home / Carousel / Causey’s Career Corner: How a yarn business helped her knit together a community
Share this... 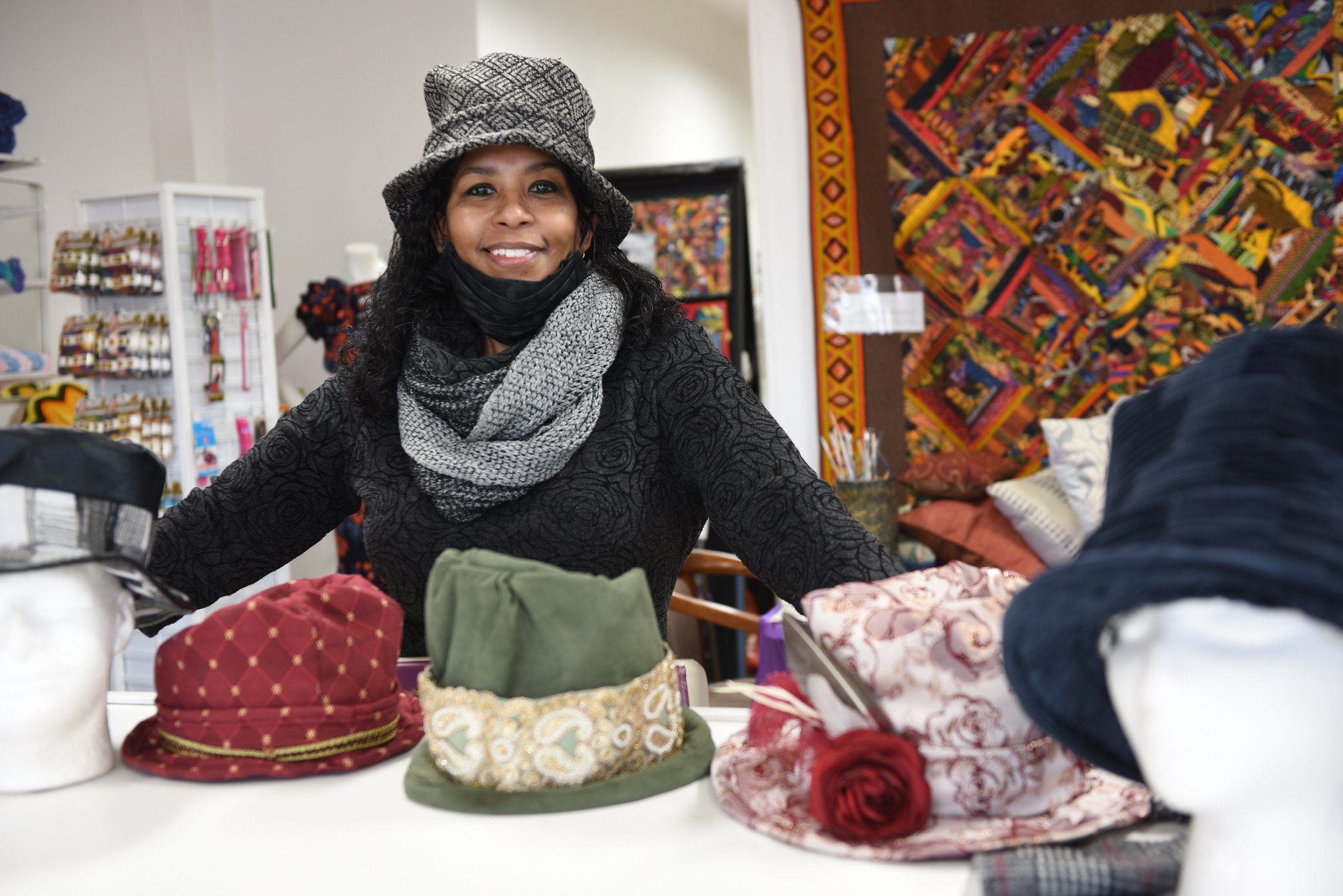 Michelle Buckhanan in her store, Yarn Junkie and Gifts, with some of her cozy hats. (Photo by Sue Vliet) 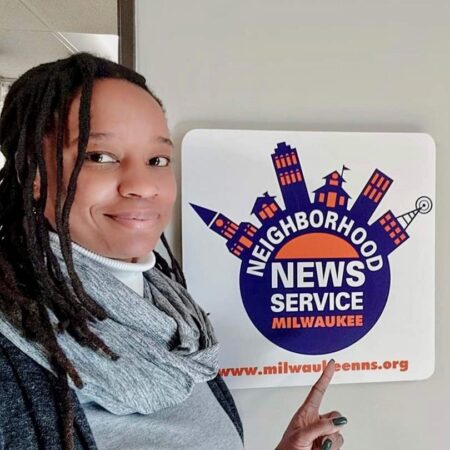 Michelle Buckhanan had no clue that taking up crocheting as a stress reliever seven years ago would lead to the opening of her own yarn store.

Buckhanan started crocheting during a time of transition from her 30-year career in the financial market. Happy with her newly learned skill set, she began posting pictures of her cozy hats and scarves on Facebook. As she became more adept at her craft, she started receiving requests for sets from her friends and family and her social media audience. Eventually, she found herself going to craft stores daily for supplies.

One day, out of frustration, Buckhanan posted a statement on social media:

“I put it out on Facebook one day saying, ‘I wish we had a Black-owned yarn shop in Milwaukee,’” said Buckhanan. One of her followers responded and said: You’re a businessperson. You should open up one.

Sure, Buckhanan had a background in finance, but she knew nothing about yarn, so she didn’t take the comment seriously. At  first. But she kept thinking about it.  She looked at the financials of starting the business. She discussed it with her husband, Walt. He gave his blessing

A space was secured right next door to their insurance business. Just 11 weeks after posting her wish on Facebook, Yarn Junkie and Gifts officially opened its doors at Lovers Lane and Silver Spring roads on March 1, 2016. 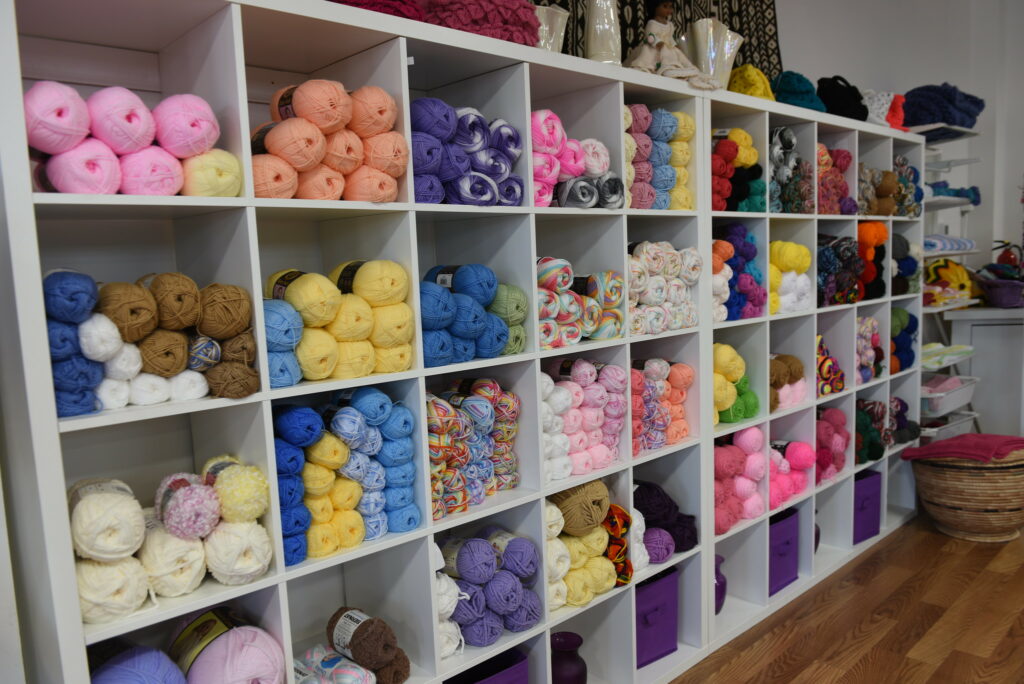 Yarn in many colors graces Yarn Junkie and Gifts. (Photo by Sue Vliet)

Business was going well, and Yarn Junkie provided local crafters the opportunity to sell their products in the store. The store became a gathering place for crafters and creatives alike. Some people even had baby showers and birthday parties there.

A group of women, ages 50 to 83, gathered at the store for a crafting circle every Thursday afternoon. They’d bring their current projects to work on as they conversed with one another. Well, sometimes they’d craft. Other times they’d order lunch and enjoy each other’s company, catching up on news events and news about each other’s children and grandchildren. Most of these women are single or widowed. They began to look out for one another. If someone was missing, the women would call and check if their fellow crafter was OK, Buckhanan said.

Things were going swimmingly for the first couple years. So much so, that the Buckhanans decided to relocate both of their businesses to another building. In February 2018, the business temporarily closed to relocate and then reopened at its new location, 12527 W. Hampton Ave., in Butler, in April 2018, in a building they now owned instead of leased.

At the onset of the pandemic, Buckhanan was gearing up for a busy season of prom and wedding alterations and custom dressmaking.

Then COVID-19 came. The virus quickly halted Buckhanan’s business. But only for a short time. Within weeks, Buckhanan pivoted and began making masks. One of the first to offer them for sale in the city, she was able to make hundreds of masks, including orders from health care workers.

“I was making so many masks, I couldn’t even answer the phone,” she said.  Then as stores began stocking masks, things slowed downed a second time. Buckhanan was able to shift again. She began making custom hats. She joined several hat-making groups on social media and has customers in different parts of the country.

“In business, you have to be flexible,” she says. “And I’m speaking from a business that I have a passion for.” 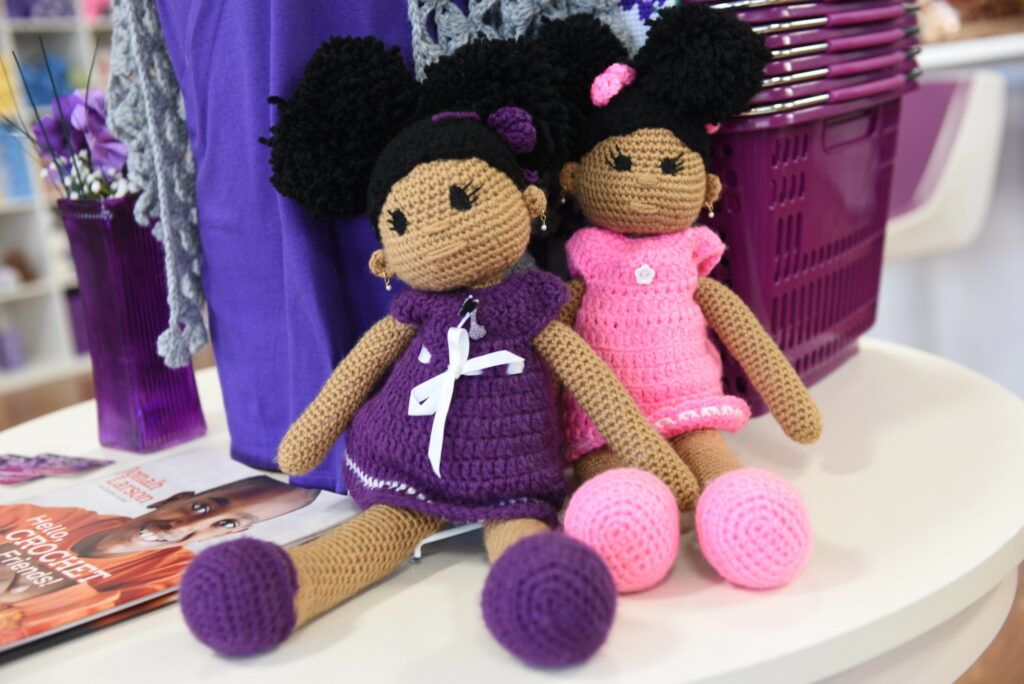 Dolls made of yarn at Yarn Junkie and Gifts. (Photo by Sue Vliet)

And Buckhanan has two last bits of wisdom to impart:

“Only consider going into a business if you’re passionate about it.”

“Comparison, that’s your enemy. Don’t compare yourself to anybody.”

About this column: I will share stories of those who have taken a nontraditional approach to employment or an unusual career path. I will also list employment information such as job fairs, resource fairs and job training events. I encourage organizations to email me at damiacausey@milwaukeenns.org with career information.