You are here: Home / Home / Carousel / ‘There are no throwaway people’: Sister MacCanon Brown and her mission to serve homeless residents
Share this... 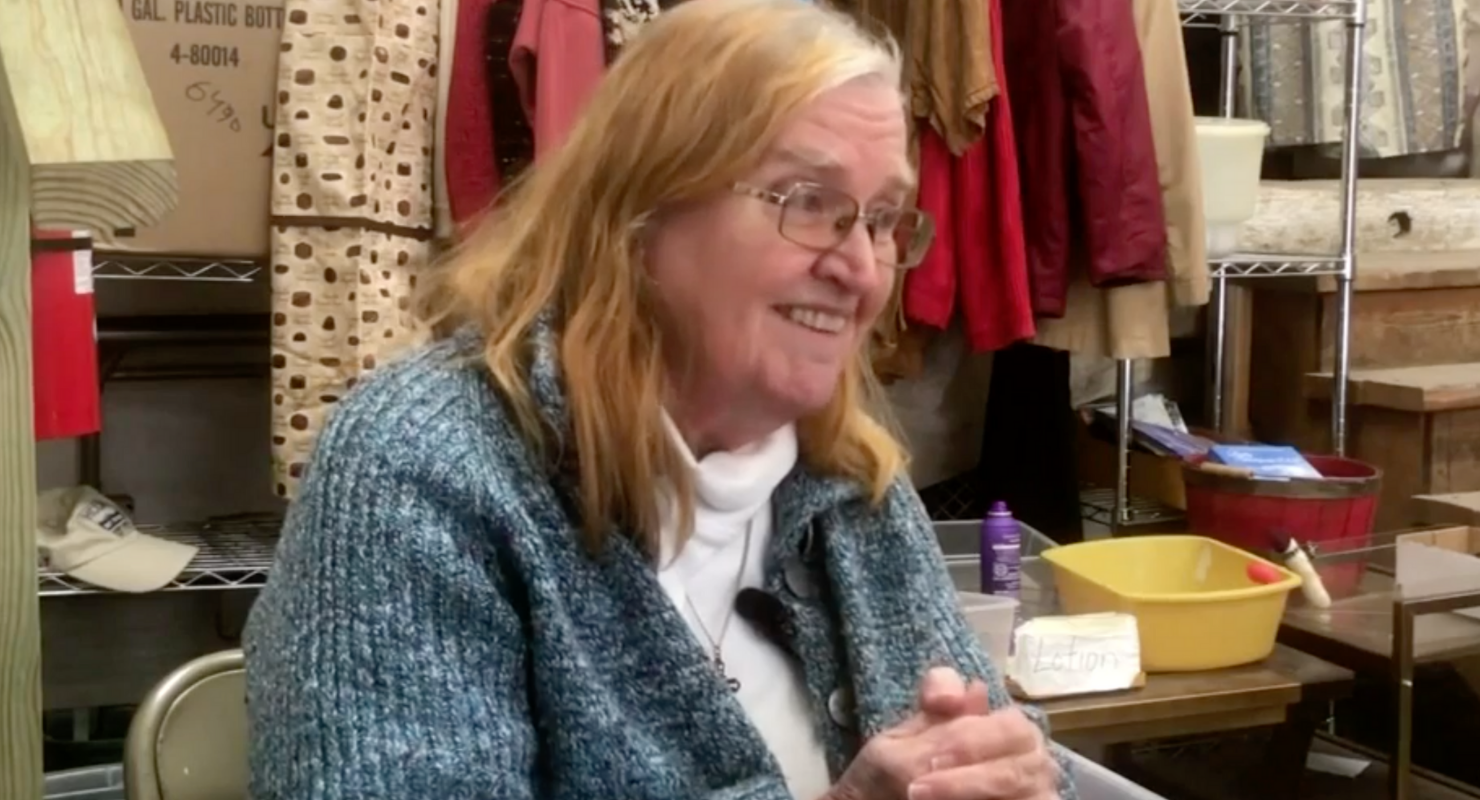 “Society has a sick a way of thinking there are people who can be thrown away,” says Sister MacCanon Brown, who has worked for 30 years to make life better for those who experience homelessness. (Photo courtesy of TMJ4 News)

A few years after Sister MacCanon Brown moved to Milwaukee in 1986, she was close to homelessness herself.

She had come to Milwaukee with the dream of being an intellectual artist and spent a lot of time alone.

She ended up at Casa Maria, a hospitality house for homeless families connected with the Catholic Worker movement. There she converted to Catholicism.

Later, when her financial situation becoming more secure, she made a vow to God to do all she could to help those who were homeless or at risk of being homeless.

“Society has a sick a way of thinking there are people who can be thrown away,” Brown said. “Older people, children and mostly homeless people are treated like they are disposable.”

Advocating for homeless residents, she said, was not something she chose — it chose her.

Brown, 74, has now been serving Milwaukee’s homeless population for more than 30 years.

Most recently, as the president of the MacCanon Brown Homeless Sanctuary, she has been working in the Amani neighborhood to provide resources like hot meals, clothing and hygiene products to those in need since 2013.

The Sanctuary, 2461 W. Center St., is currently in the middle of being renovated to become a hub of resources for those facing homelessness.

“Upgrading the building is just an addition to the work we already do,” Brown said. “With the new building, we will be able to serve people at a greater capacity than we already do.”

One of the Sanctuary’s outreach events has move to a temporary site at the Hephatha Lutheran Church, 1720 W. Locust St., once a week to keep people from standing in the cold.

Brown was born in Iowa in 1945 into a family of people whose members had been in the Protestant clergy for three generations before her. The middle of three daughters, she attended Otterbein College, now Otterbein University, in Westerville, Ohio, where she said she participated in Black studies and interracial dialogue, did inner-city neighborhood work and attended civil rights events in Columbus during the peak of the civil rights movement.

After college, she went home to be a newspaper reporter while working as a literary artist for the Iowa Arts Council. Around that time, she got married and had two sons and a daughter before moving to Milwaukee.

“I am an example of walking a distinct path,” Brown said. “I was called to do this work, and every door that has opened has been because of that.”

The road to serving the way she does has not always been easy.

She said she was invited to be part of the founding group of Repairers of the Breach, a daytime refuge and resource center for homeless adults, in late 1991. By April 1992, she became board president and later executive director.

After 20 years of work, a disagreement between Brown and Repairers’ board of directors over control of the mission and vision resulted in her termination.

“The mission and vision stayed the same,” said Rebecca North, current president of Repairers of the Breach board of directors. “There were just some differing opinions.”

However, Brown was not defeated.

A group of friends founded a new nonprofit organization so her work could continue. They named it MacCanon Brown Homeless Sanctuary.

A joy in serving others

While Brown is a nationally recognized homeless advocate and a published author, she said there is more to do.

“The joy beyond all joys is being able to call the people I serve family,” said Brown. “No matter what race, gender or class, I have been able to unify people, and if I can unify 10,000 more people across racial divides I’d be satisfied.”

Brown’s work is centered on letting people know they are important. She believes, “There are no throwaway people.”

Those who work with her say her vision is one Milwaukee needs.

“I appreciate the mission of serving those who need it most in Milwaukee,” said Jill Moore, a volunteer at the Sanctuary and a retired professor at Alverno College. “Her vision is so clear that she lives, breathes, dreams and prays it.”

Moore, who has known Brown for over three years, said she once told Brown to let her know if she needed anything. And she’s been a volunteer ever since.

“MacCanon handles things with such a skill and grace,” Moore notes. “She mediates so well; I’ve never seen violence of fights in the Sanctuary.”

Others say her sincerity is what draws people to her.

“My wife and I volunteered with MacCanon, and how genuine she always amazes me,” said Reuben Harpole, a longtime community activist.  “Everything she does is out of love of the Lord, and it shows.”

In case you missed it: Homeless Sanctuary encourages individuals to find their worth, dignity

See an interview with Sister MacCanon Brown from our friends at TMJ4 News.