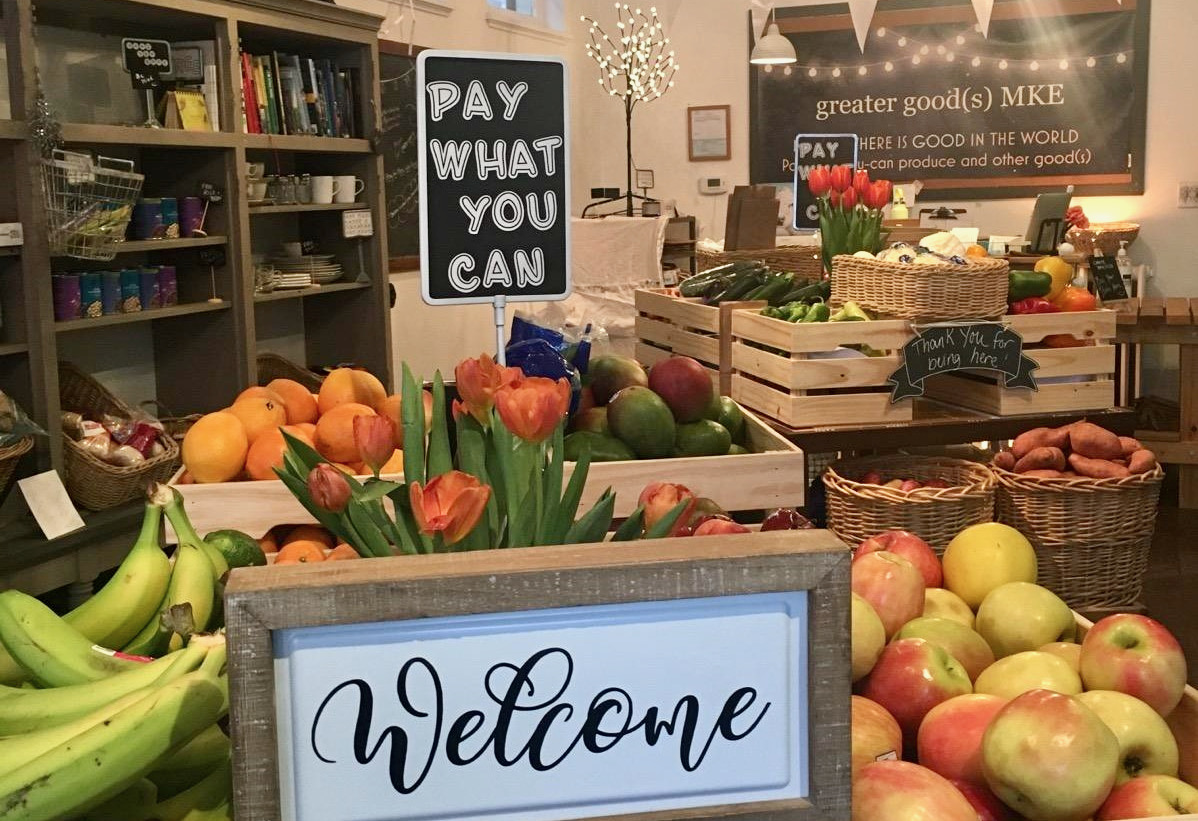 For Gina Nygro, founder of Greater Good(s) MKE, giving back runs in the family.

After all, her great-grandmother opened a pay-what-you-can deli in Racine during the Great Depression.

Nygro is doing the same with her pay-what-you-can produce market at 5205 W. North Ave. that opened in January.

Nygro’s market operates from noon to 7 p.m. Wednesdays and from 7 a.m. to noon Saturdays. Her customers are encouraged to pay what they can for the produce.

Nygro’s grocery list runs long: sweet potatoes, onions, tomatoes, celery, carrots, apples and oranges, among others, are top sellers. She gets what she can from wholesale, including at Pete’s Fruit Market, and scrounges requests from grocery stores as she needs to.

She looks for deals on produce and plans on buying from farmers once the harvest season rolls around. She receives donations as well, which she gives away in a free food section.

The “prices” basically balance themselves, she said.

Some customers also operate on kindness: Recently a young man came in and bought groceries for the next five people, she said.

Nygro worked for Delta Airlines for 32 years before taking early retirement this year. Although she’s still not entirely sure how she ended up running the market, she said faith led her here.

“He just started opening doors, and I keep walking through them,” she said.

One of those doors was to the Imago Dei Church, which is across the street from Greater Good(s) MKE. The church donated $8,200 to help cover expenses and to partner in the initiative, said Abbra Best, the volunteer communications director at Imago Dei.

Best said the pay-what-you-can produce market helps to bring equity to the neighborhood, where there is a disparity in income.  Greater Good(s) MKE was identified as part of the church’s “ReGift” campaign, where Imago Dei  donates a gift to the city in the form of public service each Christmas.

“We really seek out those people that are doing good and want to come alongside of them,” Best said.

Nygro said the money has helped tremendously, as have donations from others in the community.

Greater Good(s) MKE has quickly become more than just produce, she said. It’s become a place for the community to come together in a time of challenge.

“It’s not just about fruits and vegetables,” Nygro said. “I think it’s a connection point for people who are feeling alone, knowing their neighbors are taking care of them.”

Greater Good(s) MKE also offers pre-arranged bags of produce, with suggested prices ranging from $3 to $7. The bags are also pay-what-you-can. Those who want to order ahead can call (414) 788-7151.