You are here: Home / Neighborhoods / Amid surge in drug overdose deaths, City-County Heroin, Opioid and Cocaine Task Force fails to meet
Share this... 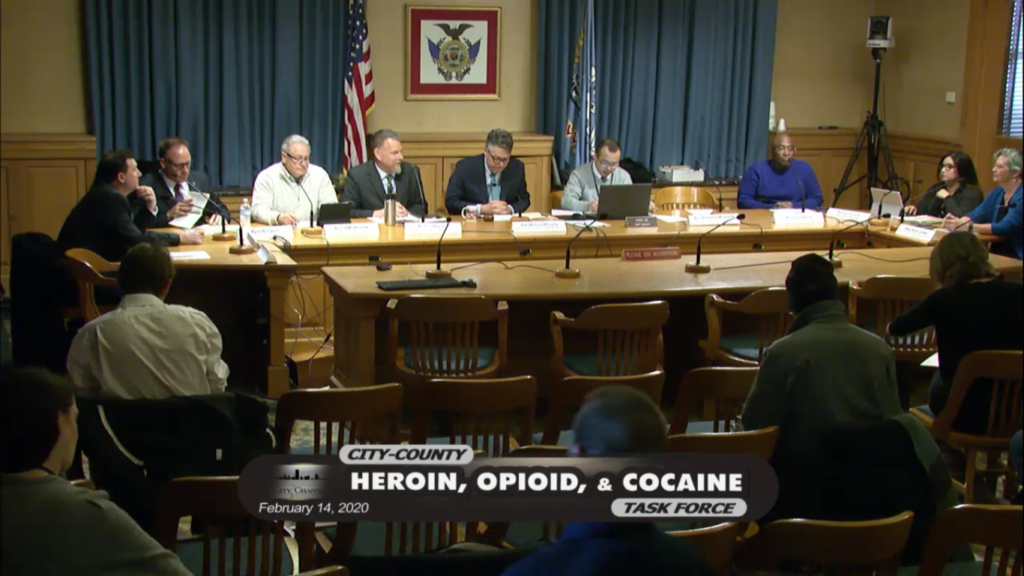 Despite a record-breaking year in drug overdose deaths in Milwaukee County in 2020, the City-County Heroin, Opioid and Cocaine Task Force managed to meet only once last year and hasn’t met at all in 2021.

Ald. Michael Murphy, chairman of the task force, told NNS it’s been challenging to get enough members to establish a quorum.

“I have actively been attempting to schedule a meeting in which a minimum of seven members can attend,” Murphy said.

The previous high, 418 deaths, occurred in 2019. Some observers attribute the rise in drug overdose deaths to the pandemic, which has increased isolation and created  other negative impacts on mental health.

The pace of deaths so far this year could be similar to last year. According to data obtained from Karen Domagalski, operations manager for the Milwaukee County Medical Examiner’s Office, there were 58 confirmed drug overdose deaths in the county from Jan. 1 to April 7, with another 86 suspected cases pending toxicology reports. If all those deaths are confirmed to have been caused by drug overdoses, as suspected, that would increase the total to 144. Through the same time period last year there were 146 drug overdose deaths.

The City-County Heroin, Opioid and Cocaine Task Force was created in 2017 to respond to a growing drug overdose crisis. Even then, the group also struggled to meet quorum. NNS reported that four of 12 meetings that had been scheduled for that year were canceled. The group met four times in 2018 and just twice in 2019.

The 10-member task force is made up of a mix of elected officials, officials from the county and representatives of law enforcement and community groups.

Milwaukee County Supervisor Ryan Clancy, who represents sections of 53215, the city ZIP code that lost the most residents to drug overdose deaths in 2020, is also a member of the county’s Health, Equity, Human Needs and Strategic Planning Subcommittee. He said that the subcommittee has not received a report from the City-County Heroin, Opioid and Cocaine Task Force in quite a while and that he was aware that it hasn’t met since early 2020.

“That’s troubling,” Clancy said.  “I totally understand that with COVID, some work had been derailed, but we certainly have the ability to meet virtually.”

The last meeting of the task force occurred Feb. 14, 2020. On the agenda that day was the announcement of a $700,000 grant to fund the Milwaukee Overdose Response Initiative; a presentation by representatives of the Oxford House, a men’s sober living house in Milwaukee; and time for public comments. The meeting concluded with an announcement from Murphy that the group would meet quarterly and gather again in April or May of 2020.

Paul Mozina, a community activist and frequent critic of the war on drugs, was one of the individuals who provided public testimony during that meeting. Since then, Mozina has sent several emails, the first in October 2020, to Common Council members and county representatives asking that the County Heroin, Opioid and Cocaine Task Force resume meeting. His most recent emails were sent in December and February.

“Everybody else got on their feet and met again,” Mozina said. “There’s no excuse for them not to meet.”

The Feb. 14, 2020, meeting occurred just weeks before COVID-19 essentially stopped in-person meetings, which likely hampered the task force’s ability to meet early in the pandemic. But many other committees and policy-making groups adjusted to COVID-19 protocols within months and have met regularly since then. The City-County Task Force on Climate and Economic Equity, for example, met nine times last year between Feb. 13 and Dec. 16,

Clancy said the Health, Equity, Human Needs and Strategic Planning Subcommittee is in the process of assigning a new chair to replace Supreme Moore-Omokunde, who was elected to the Wisconsin State Assembly Once a new chair is assigned, Clancy said, the subcommittee will request a report from the task force.

Several members who were contacted by NNS said the task force is still active but acknowledged the challenge in reaching a quorum. One was Brian Peterson, chief medical examiner for Milwaukee County.

“A meeting is currently being scheduled. I will not be attending due to work demands, but I will be providing data,” Peterson said in an email to NNS.

Murphy said he sent a letter this week to the task force asking individuals whether they still wanted to be members or be replaced. He added that work based on the task force’s final recommendations report released in 2018 was still being advanced by the group.

He said there is money in the city budget to address the overdose crisis, and that the city had recently purchased test strips that can help users know if a drug has been cut or mixed with fentanyl that will be available to the community this spring and summer. The county has also led several efforts aimed at providing resources for individuals who struggle with addiction and housing issues.

Meanwhile, the city and county continue to struggle to stem the tide of drug overdose deaths.

“Our communities have been hit hard by both the pandemic and the opioid epidemic,” Clancy said. “We’ve got to stay focused on these issues and work to find solutions.”