You are here: Home / Home / Carousel / Community groups will launch multiple campaigns to reduce reckless driving in Milwaukee
Share this... 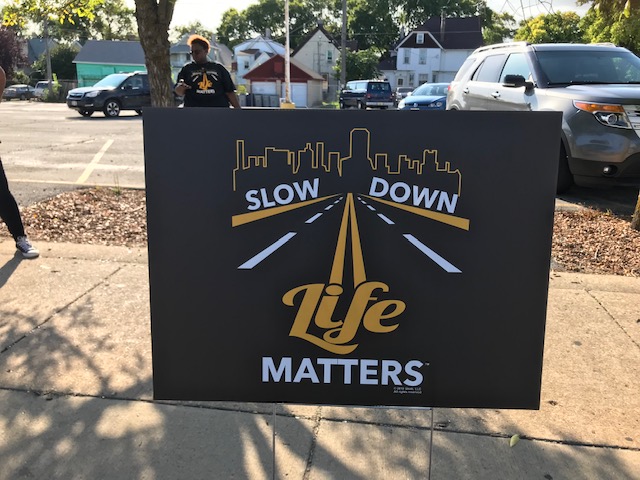 The “Slow Down, Life Matters” campaign will focus on Sherman Park and other Milwaukee neighborhoods this summer. (Photo provided by Coalition for Safe Driving MKE)

Fed up with the deaths and damage caused by reckless driving, 18 community groups in Milwaukee are launching a series of efforts to persuade drivers to slow down.

The groups received a total of $102,000 in grants from the city’s Department of Public Works to fund the campaigns.

One of those groups is the Villard Avenue BID, which will launch “I matter, you matter, we matter” and #SlowDownVillard campaigns during a six-week safe summer concert series. Its plans include educational booths with information on the dangers of reckless driving as well as driver’s education programs for youth.

“Currently, Villard has no street calming mechanisms in place,” Sharpe said. “However, this summer DPW is slated to install our very first bike lanes, curb extensions and high visibility crosswalks, so I feel that our reckless driving campaign coupled with our actual physical changes is extremely valuable.”

The campaigns come after a year in which the city experienced 77 fatal crashes attributed to reckless driving, an increase of 51 percent from the previous year. Out-of-control driving continues to be an issue that haunts Milwaukee.

On the South Side, Muskego Way Forward, a program of the Milwaukee Christian Center, will partner with LISC Milwaukee, Imagine MKE and others on several projects. Among them are performance art events at high-traffic areas; “slow down” lawn signs and other visual messages; and public demonstrations on crosswalks, which the group started last year after a fatal crash caused by reckless driving. 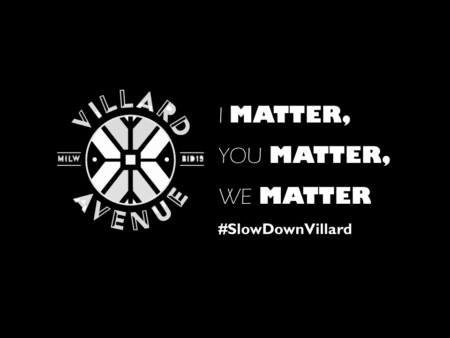 “The crosswalk actions are to bring awareness to drivers that they need to pay attention to pedestrians,” said Edith Chavez, program manager and lead organizer for Muskego Way Forward. Chavez and other residents, including youth, walked around the area of South 16th and West Mitchell streets last year holding signs urging drivers to also keep an eye out for the many children in the area who walk to and from school.

“We’re going to continue doing some of the same things to hopefully get people’s attention and address these issues,” Chavez said.

Celia Jackson, a member of the Coalition for Safe Driving MKE, said her group is working with the Community Insurance Information Center, residents and stakeholders in the Sherman Park neighborhood, another hot spot for reckless driving.

They plan to expand their current campaign, ”Slow Down, Life Matters,” by placing the logo on eight city busses and a large billboard in Sherman Park.

“It’s a work in progress, but we’re really trying to do all we can to address reckless driving,” Jackson said. “It’s a team effort.”

They’re also in the process of planning a comprehensive webinar related to reckless driving and have plans to collaborate with another grantee, the Grasslyn Manor Block Association, to host events in the Midtown neighborhood. An important aspect of these small campaigns, funded by grants ranging from $2,000 to $5,000, is that many community groups are combining efforts.

That level of coordination is crucial to developing a collective response to an issue that hits all areas of the city, said John Rakowski, senior director of development and partnerships for Running Rebels, which also received a grant.

“The hope is that we can build a little synergy in cohesion more than they would be otherwise,” Rakowski said. “It can really help to build a better understanding of the community’s collective interests in addressing reckless driving through education and engineering solutions.”

Eventually, Rakowski said, he hopes to unite the groups behind those types of efforts rather than relying on increased enforcement measures to address reckless driving.

“As a big metropolitan city, the idea of traffic safety and pedestrian safety is always going to exist as a top issue,” he said. “But as a community, we can definitely improve conditions and help create an environment where reckless driving behavior is less common.”