You are here: Home / Home / Carousel / ‘And now he’s gone’: Event remembers those who lost their battle with opioid addiction
Share this... 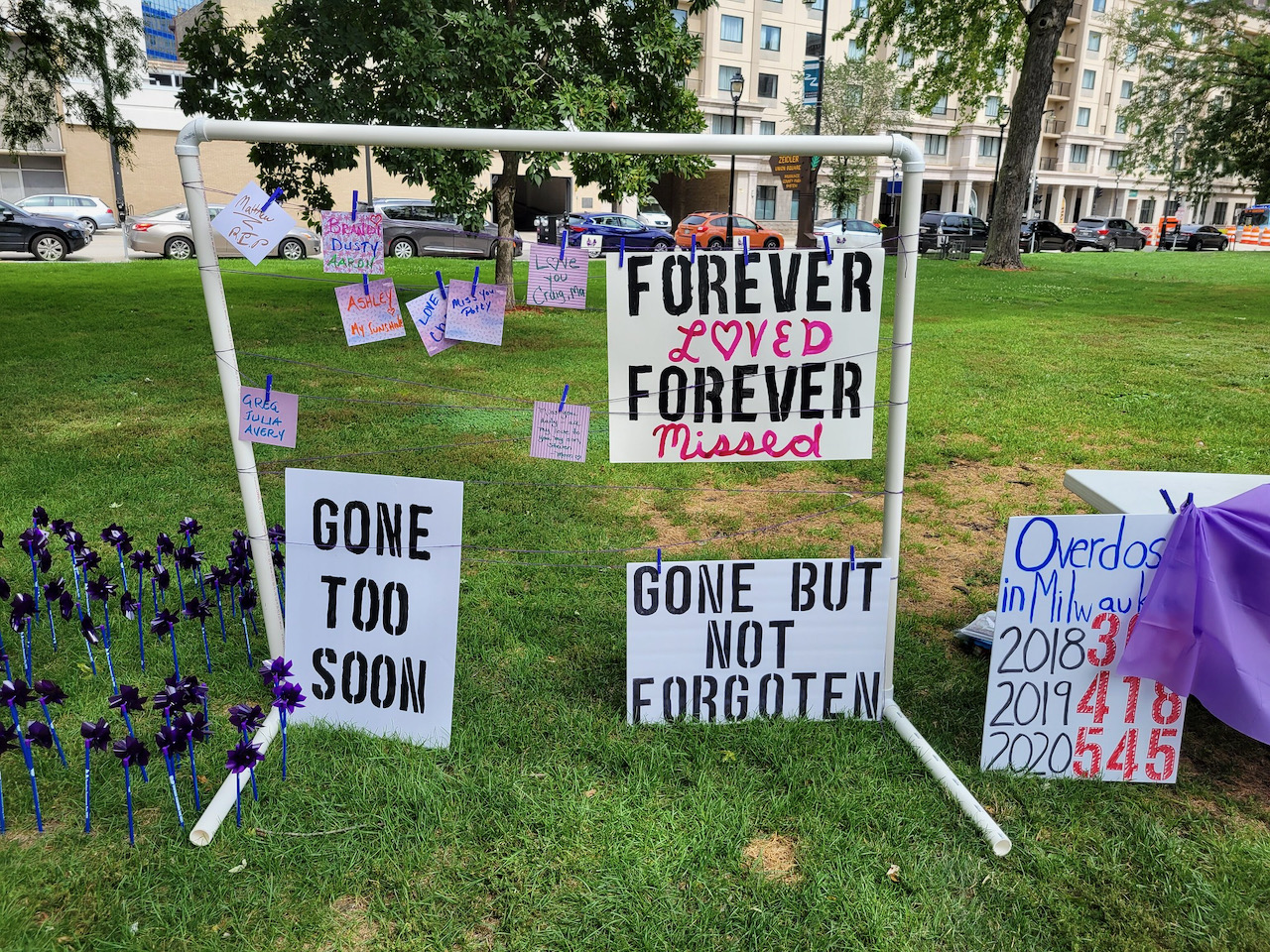 UW-Milwaukee student Zachary Jones, 26, still remembers the call he got from his friend, Nate, last spring.

Nate lost his battle in August 2020, Jones said, succumbing to a fatal dose of fentanyl, a synthetic opioid that can kill in trace amounts and has fueled a local and national surge in drug overdoses.

Jones joined others Tuesday at Zeidler Union Square in downtown Milwaukee to pay tribute to Nate and others during a memorial event marking International Overdose Awareness Day.

“Sometimes we lose the humanity when we see the numbers,” Triblett said.  “This is a way to remember and honor those individuals who passed.”

The event featured grief counselors, speakers providing information on Narcan, a medicine used to reverse the effects of drug overdoses, and others.

Serita Valmond, a chronic pain coach, was there to provide information on using wellness techniques to overcome addiction to pain medicine. Valmond said her car was rear-ended by a drunk driver in 2016, and, as a result, she took 15 different prescriptions to manage her symptoms.

“People begin to think that there are no alternatives other than pills to manage pain,” she said.

She used a holistic approach based on nutrition, stress management and other healing approaches to treat her pain and now works to help others do the same.

Also at the event was Captain Gregory Miller, a community paramedic program manager for the Milwaukee Fire Department. Miller shared information about the Milwaukee Overdose Response Initiative, or MORI program. MORI, a partnership between the fire department, Milwaukee Health Department and a number of community partners, involves deploying a rapid-response team to homes or hospitals in hopes that people who survived drug overdoses are ready to try to change.

“Sometimes we’re visiting people who have attempted treatment many times and suffered several near fatal overdoses,” Miller said. “It’s not easy, but we will keep getting out there and keep trying to get people into treatment.”

Whites (53 percent) and African Americans (38 percent) make up the largest group of victims, while 6 percent were Hispanic. Three Native Americans and multi-race individuals, and two East Indian and East Pacific Islanders also died of drug overdoses this year. Three-fourths of all victims were men. The youngest victim was just 1-year-old, while the oldest was 77.

As the number of deaths continues to rise, the challenge remains in creating effective strategies to treat substance abuse disorders, Triblett said.

“We need to look at folks who may be experiencing poverty, homelessness, illness and all of these other things that become factors for drug misuse,” he said. “We need to take a public health approach to deal with this issue.”

Sitting near a display that featured handwritten notes to loved ones who died of drug overdoses, Jones reminisced about the friend he lost.

“Nate was charismatic, a fun guy who just kind of went with it and was someone you wanted to be around,” he said. “But addiction is hard to escape when the end game is to escape from your reality. And now he’s gone.”