You are here: Home / Home / Carousel / Not many Black men work in early childhood education. Next Door’s Jeremy Walton wants to change that.
Share this... 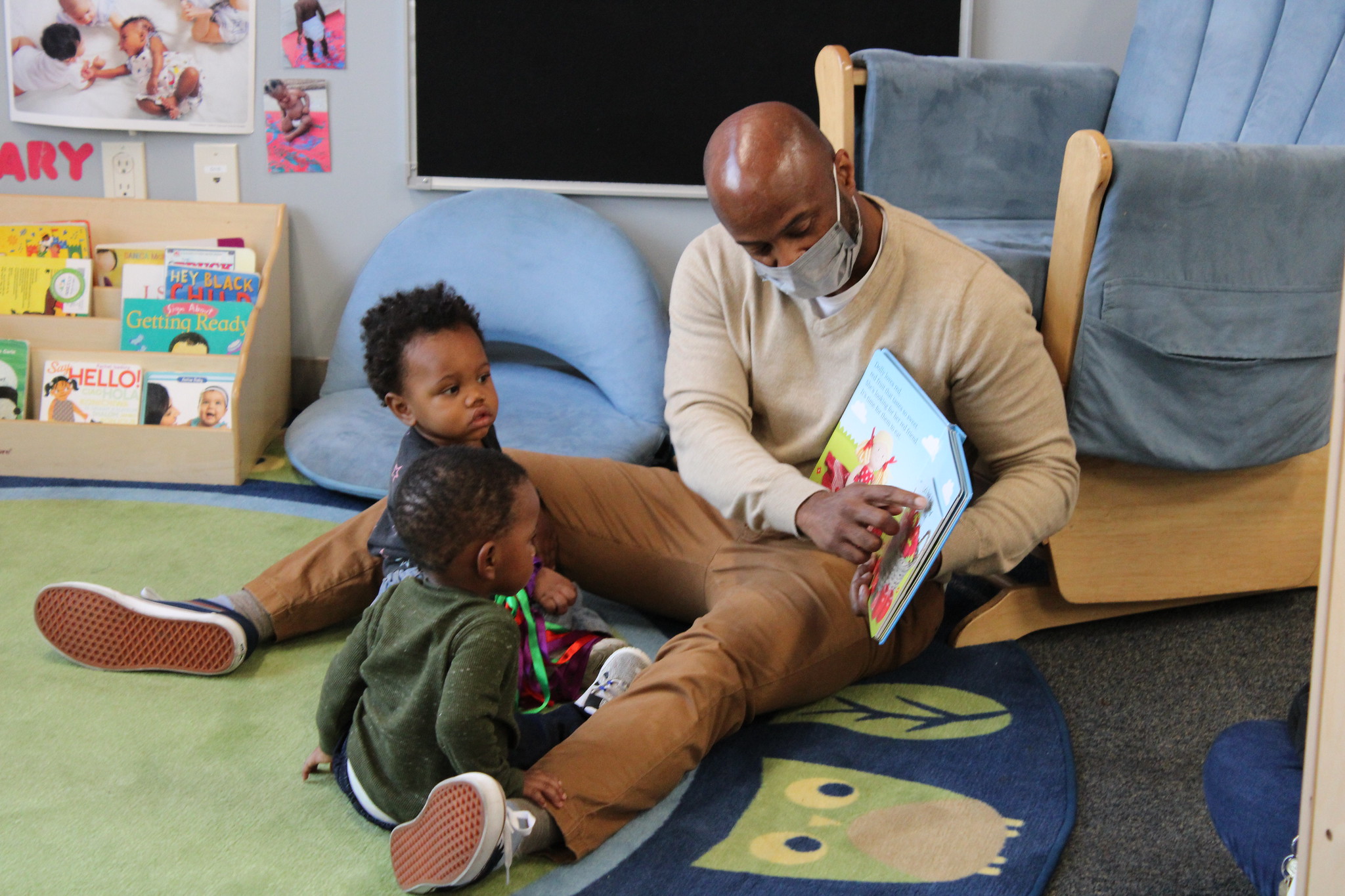 Jeremy Walton reads a book with two of his students at Next Door. (Photo by Matt Martinez)

After seven years, Jeremy Walton finally feels like he’s back where he belongs.

After spending nearly a decade as an IT support technician for Next Door, an early childhood education organization in Milwaukee, Walton returned to the classroom as an educator in August.

“It’s going to reach farther than me helping people with their technology needs versus me helping develop human beings to become a better version of themselves,” Walton said. “You can always order a part for a laptop or a monitor, but you can’t order a new heart. You can’t replace a hurt emotion.”

Walton, 44, started working in early childhood education in 2001. He is a son of educators and volunteered in a classroom in the summer before his senior year in high school.

The importance of being a Black man in the classroom, particularly for developing children, isn’t lost on Walton. Only 2% of teachers nationwide were Black men, according to a 2016 study from the U.S. Department of Education.

While kids in Walton’s classroom do what you might expect – read storybooks, have playtime, learn values like sharing and friendship—Walton said he seeks to nurture their developing brains.

“They don’t stay this size forever,” Walton said. “When I come here every day, I need to teach them right . . . because that can be the difference between an angry adult or an individual who is able to manage their emotions and navigate life a lot better.”

Walton sees his role in the children’s lives as important. In him, they have a role model to show them that it’s OK to show different emotions.

“Being masculine doesn’t always mean having a hard exterior, being devoid of emotion,” Walton said. “What it really means is that we need to be full of life. We can be nurturing, caring, compassionate, a protector, all of these different areas.”

Where men are a minority

Walton said he wanted to see more men step up and get involved with early childhood education, as there are few men in these positions. In 2020, the Bureau of Labor Statistics reported nearly 99% of preschool and kindergarten teachers were women.

“It’s the furthest thing in the world from babysitting,” she said. “You’re developing minds and brains of young children.”

Sparrow said Walton has tried to increase the number of educators personally. He volunteers as a mentor for members of The Literacy Lab, a national organization aimed at increasing literacy in the country The organization’s Leading Men Fellowship program specifically aims to place young men of color in early education positions.

The Rev. John Walton, Jeremy’s father and the pastor of Epistles of Christ Church, 2407 W. Nash St., said one of his son’s strong suits is having patience with kids.

“His heart has always been with teaching and training young people,” Walton said. “He has that fire, that passion, that drive to do it.”

Walton said that Jeremy’s work in his church speaks volumes about his dedication to the community. He’s organized bookbag drives, meal distributions and other events to help bring the church closer to residents.

“He saw so much need to try to reach out,” John Walton said.

For Jeremy, it’s simply a way to give back.

“I can’t save the world, but I can touch the lives of the eight families that we have and be an example,” he said.